The backstory of the ’45 to 1′ documentary 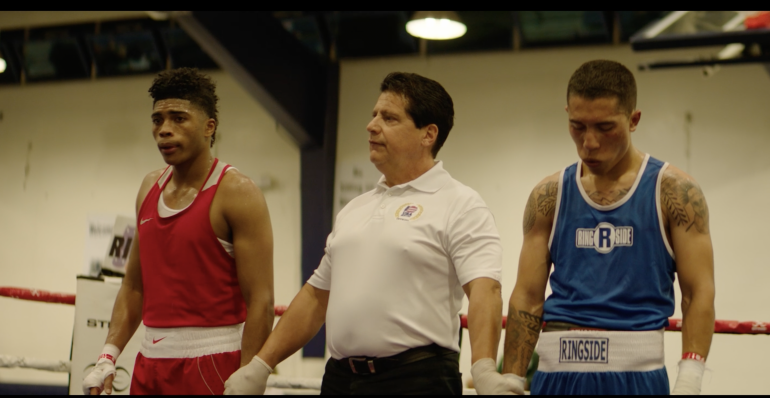 Kalief Lindo hid it well for a while. Each time he walked into his Jamaica, Queens home, there were never any bruises on his face, or darkened blotches around his eyes. Lindo was always tough to hit—and harder to read.

Lindo had started boxing at the Church Street Gym in Tribeca, New York in 2016. It replaced his initial passion, soccer, only his parents, Vinton Lindo and Carol Tatt, didn’t know it. Or, at least that’s what Kalief thought until one November day in 2019, preparing Thanksgiving Day dinner with his mother in his grandmother’s kitchen, Carol asked, “So, Kalief, how was your fight on TV?”

His parents found out when a friend alerted them that they saw a replay of Kalief’s 2017 New York Golden Gloves title fight streamed on SNY.

Kalief’s parents weren’t so blindsided this time, when he let them know he would be the main subject of Kabir Chibber’s 72-minute documentary titled “45 to 1.”

It chronicles Lindo’s last-chance qualifier in a weeklong tournament in Oxnard, California, in 2019 to make the U.S. 2020 Olympic boxing team. It shows a vivid, pull-back-the curtains look at the hardboiled, lonely, often brutal life amateur fighters lead to make the Olympics.

About 19 minutes into the film, there is a very poignant moment of many where Lindo speaks candidly about boxing, “Boxing can change your life, or f—king destroy it.” Just before Lindo says this, a sentence glowers across the dim screen reminding viewers of the stark reality that “Even if a boxer wins gold at the Olympics, they only have a 17% chance of becoming a world champion as a professional.”

This is the life Lindo had concealed from his parents. The 26-year-old’s mother was born in Birmingham, England, his father in Kingston, Jamaica. Lindo gravitated toward soccer, reaching the semi-pro level while attending the Borough of Manhattan Community College. He was looking to improve his soccer skills and found the Church Street Gym in a basement. He would become entranced watching the Halili brothers, Skender Halili and Enver Halili, and their trainer, Jason Strout.

It reached a point where Lindo wanted to step into a ring himself when he was 19. He didn’t fair well. He and a kid who was in the Church Street Gym for the first time faced Strout, who taught them both a lesson. Kalief’s friend, Nicco Diaz, suggested both Kalief and the new guy should not fight again any time soon.

He started developing his skills sparring pros like junior welterweight contender Edgar Santana. In 2016, Lindo entered the Golden Gloves, making it to the semifinals. The following year, he reached the 152-pound finals and lost when he was 22. Two years later, SNY happened to show a streamed replay.

“That’s how my parents found out,” Kalief said. “I remember my mother asking me, ‘So, Kalief, how was your fight on TV?’ I looked at her in shock. I asked her how she found out. My mom was supportive. Why it took so long to find out is what made her the most upset.”

In 2019, Kalief, trained by 34-year-old Jonathan “Jay O” Earle, was approached by Chibber about the possibility of following and documenting his trip to Oxnard for a last chance at qualifying for the Olympics.

“I just finished sparring and Kabir comes up and asks me if I was fighting any time soon. I told him I had the Olympic Trials coming up, and he asked if he could record it,” Lindo recalled. “I told him that I wouldn’t mind, as long as the cameras aren’t all up in my face. Otherwise, I was cool with that.

“I told him anything could happen at the tournament. I could go there and be robbed in the first fight. I told him what we do and how we train, so that put him up to date with everything.

“It was good. I liked the whole experience and I hope I represented all of the things for others who are going through it.”

Lindo quickly became self-conscious of the cameras during the weigh-in in Oxnard. No one knows most—if not all—of these fighters, unless you’re on the amateur circuit. For a fighter not known nationally, as Lindo was, to arrive with a camera crew spelled instant attention and instant glare. 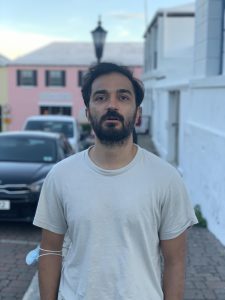 It was Kabir Chibber’s idea to delve into the world of amateur boxing as the inspiration for the 45 to 1 documentary.

Lindo could feel the eyes on the back of his neck.

“I remember everyone turned around and looked at me (laughs),” Lindo said. “I was new to the national game. No one really knew me. It’s easy to understand. Once I got past the first fight, I got used to the cameras.”

While Lindo was garnering eyeballs on him, Chibber’s eyes were widening with each layer of the amateur world’s underbelly he was entering.

Chibber was born in Hong Kong and raised in London. Although he is 40, he sounds like he’s 12 and attacked the project with the boyish enthusiasm of a kid ripping apart Christmas presents. He paused work on his first fiction film to develop and produce “45 to 1.”

“I thought it was interesting to be on the inside of someone’s last shot to qualify for the Olympics in late 2019 and we were set for a release in the middle of 2020. which obviously didn’t work out the way we wanted it,” said Chibber, who boxes himself and is a huge boxing enthusiast.

Chibber found the seven-day tournament a pressure-cooker environment in everything from how Lindo raised the funds for the trip on a Go-Fund-Me page, to making weight each day and the solitude of waiting hours between fights.

One of the more challenging aspects of the actual filming was finding the space when Lindo was able to express himself on what he was thinking.

“It’s a careful balance,” Chibber said. “You want to penetrate their souls a little bit and get into their psyche, but they don’t want to expose themselves or show any fear in those moments. It’s that delicate balance in finding access to a person when they’re at their most tense and at their most vulnerable. That was the biggest challenge during the film making.

“After that, it was finding the right way to tell the story and making sure it was made so people on the outside understood what was at stake. It wasn’t too small, but it also wasn’t too big. You want to immerse the viewer into a whole experience that 99.9% of the world will never go through.”

“There is no sense what these kids have to go through and what they have to overcome,” Chibber said. “I wanted to see the sort of cruelty of the sport with my own eyes. You just fight and the last person standing at the end of it is the best. You can hear the announcer say, ‘Thanks so much, and thank you for attending, but everyone who has not made it to the next round, please take off your stuff and go.’ You can hear that. As people are still fighting, you can hear people’s dreams coming to an end.”

Lindo is looking to fight in one more amateur tournament in December, then possibly turn pro in 2022 as a junior welterweight. He does well as a personal trainer and has a 15-month-old son named Kyro. Reaction to the documentary has been strong. Family and friends told him they loved it, even if it wasn’t a glorious ending, much to Kalief’s chagrin.

But his parents are aware of it.