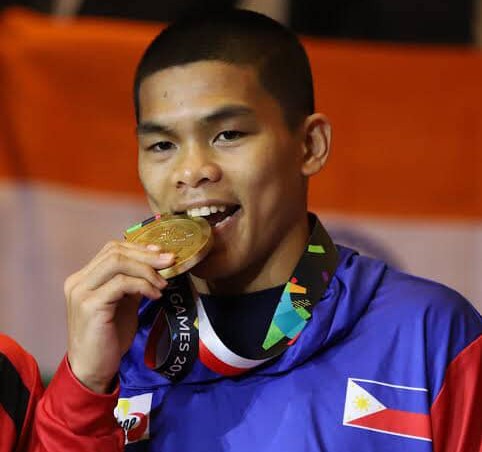 Carlo Paalam guaranteed the Philippines its third medal at the Tokyo Games with a significant upset win over reigning Olympic gold medalist and world champion Shakhobidin Zoirov of Uzbekistan in the flyweight quarterfinals on Tuesday, local time.

Paalam, 23, of Cagayan de Oro City showed no fear of Zoirov, 28, of Kogon, taking the fight to the more experienced southpaw from the opening bell. Paalam swept the opening round on all five judges’ scorecards, which would prove to be a significant factor in the bout.

The two clashed heads in the second round, producing cuts on both fighters. Paalam’s cut was on his forehead, in a spot that wasn’t dangerous, but Zoirov had a cut above his eyebrow, bringing the bout to a halt at the 1:40 mark of the second round.

Carlo Paalam of the Philippines #PHI 🇵🇭 defeats the Rio Olympics gold medalist to advance to the semi-finals of the #TokyoOlympics2020 #Boxing pic.twitter.com/40blY1ivD5

Four judges scored the bout for Paalam, while the third had it even, awarding Paalam the victory on points. He now moves on to face Japan’s Ryomei Tanaka, the older brother of three-division pro champion Kosei Tanaka, in the semifinals on Thursday.
Tanaka earned his spot in the semifinals by defeating Colombia’s Yuberjen Martínez, 4-1, in an earlier bout.

His semifinals berth means Paalam will join two of his teammates, men’s middleweight Eumir Marcial and women’s featherweight Nesthy Petecio, on the boxing medal podium. Petecio will face Japan’s Sena Irie in the gold medal match later in the day, while Marcial faces Oleksandr Khyzhniak of Ukraine in a semifinal bout on Thursday.

The 2020 Games have been a bust-out success for the Philippines, which has so far earned four medals, surpassing its previous record of three, set at the 1932 Olympics. The country had earlier shed its dubious distinction of being the most bemedaled nation without a gold medal after weightlifter Hidilyn Diaz earned gold in the women’s 55 kg category.