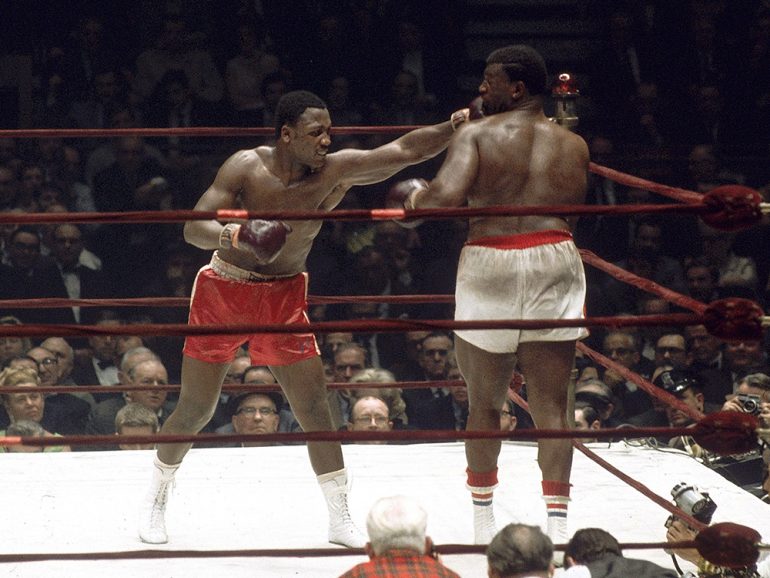 Joe Frazier replaced future pro-foe Buster Mathis in the 1964 Olympic Games and won gold as an alternate, but what if he hadn't?
02
Aug
by Doug Fischer

Don’t know if you saw it on DAZN but Leigh Wood looked like he’d sucked up as much as he could possibly get in his time with Ben Davison.

I don’t think I’ve seen a more transformed fighter in all my days. People are going to say it was down to inactivity on Xu Can’s part and that obviously was a factor but Wood’s composure and poise was something to behold. 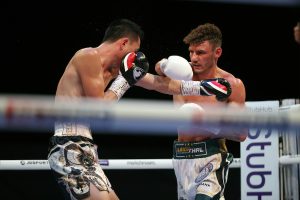 Thanks for sharing your thoughts and questions with the Mailbag, Rob. I did watch the Xu Can-Leigh Wood fight on DAZN this past Saturday and really enjoyed the fight, probably more than most because I actually thought it was a “fight.” British fans via Twitter and the official scorecards let me know that it wasn’t as close or competitive as DAZN commentator Andy Lee and I thought it was going into the final round, but that’s OK. Andy and I saw a heated featherweight showdown, where the underdog came on strong down the stretch and triumphed in a dramatic finish. Everyone else saw one-sided drubbing, so we were more entertained than the rest ‘o y’all. LOL.

Anyway, I was impressed by Wood’s composure and ring generalship. That was my first time watching him and I thought his jab to the body was Mayweather-esque. It stopped Xu in his tracks and set up the Chinese standout for his power shots upstairs (particularly the uppercut). I’m always impressed with Davison.

Hi Doug, with the 2020 Tokyo Olympics still in play, I’d like to ask about former heavyweight world champion Joe Frazier, who many know was actually an alternate to the 1964 Olympics (also in Tokyo!) and was able to compete because of an injury to heavyweight representative Buster Mathis. Frazier, who broke his thumb in the semi-final match, ended up winning the gold medal. His Olympic accomplishments helped pave the way for significant financial support from investors (i.e., Cloverlay), who backed his professional plans, which allowed him to train full-time and not worry about financial constraints.

My questions to you are these:

1) If Frazier had never competed in the Olympics and won the gold medal, do you think he still would have become heavyweight champion, knowing that his road to the top would have been longer and much more difficult to attain, especially without significant financial backing?

2) Frazier competed in the championship Olympic match with a broken thumb on his left hand (which he concealed from others)—the hand from where he threw his vaunted left hook. In your opinion, how difficult an achievement was winning his championship match from his German foe, since he had to not only battle the injury, but also be deprived of his best offensive weapon?

Finally, I’d like to know if you think had Buster Mathis competed in the 1964 Olympics, would he likely have won the gold medal and would this have made a significant difference in his pro career?

I find it fascinating how history intervened, affecting the destiny of these two men, which makes me a little sad for Buster Mathis, who lost a shot at Olympic glory and fame. Thanks SO much for your mail bag pieces. I’ve read you for many years and consider you not only a great boxing scribe, but a great native son of the “Show-Me” state! – Bryon McLaughlin, Kansas City, MO

Thanks for the kind words and the Show-Me State shoutout, Byron. I’m due a visit. 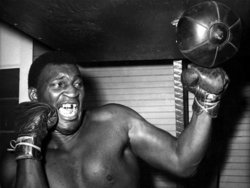 That’s an interesting “What If?” – Mathis not getting injured and competing in the 1964 Tokyo Games. I think his tremendous size, natural talent and boxing style would have taken him to the gold medal. However, I don’t think he was suited for the professional ranks. He was a bit “soft,” and I’m not referring to the spare tire around his waist. Mathis smart, skilled and had a great trainer (Cus D’Amato) but he was a gentle giant, and that wasn’t enough to make it to the championship in the 1960s. There were too many sharks in the deep waters of the heavyweight division at that time. Frazier was one of them.

Mathis was matched very carefully as a pro and there had to be a reason for that. Despite his amateur background and considerable ability the big man was still fighting six rounders almost two years after his pro debut. He didn’t face a Ring-rated heavyweight until he fought Frazier in 1968 (and Smokin’ Joe chopped him down to an 11th-round stoppage). He wouldn’t beat a Ring-rated fighter until he outpointed George Chuvalo in 1969 (and that was his 29th pro bout). By contrast, Frazier faced his first Ring-rated fighter (the rough-and-tumble Oscar Bonavena) in his 12th pro bout, 13 months after his pro debut. Frazier stopped Chuvalo in his 17th pro bout in 1967. Between Bonavena and Chuvalo, he stopped veterans Eddie Machen and Doug Jones.

Mathis was suited for the amateurs. Frazier was born for the pros. 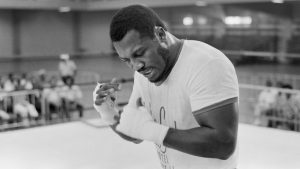 Joe Frazier was born to fight and prevail against all odds.

1) If Frazier had never competed in the Olympics and won the gold medal, do you think he still would have become heavyweight champion, knowing that his road to the top would have been longer and much more difficult to attain, especially without significant financial backing? Frazier was born to fight and overcome adversity. He was a true warrior. Nothing would have prevented him from winning the heavyweight championship once he turned pro and set his mind to that goal. Would it have taken him longer to get there without the gold medal and financial backing of Cloverlay? Absolutely. Would he have suffered a loss or two on the way because he would have had to work a 9-to-5 during his early pro years? Probably. But the way he fought, he would have soon caught the eye of prominent managers and promoters, who would have backed him because he was a crowd pleaser with real potential. The smart boxing folks would have seen that and got behind him.

2) Frazier competed in the championship Olympic match with a broken thumb on his left hand (which he concealed from others)—the hand from where he threw his vaunted left hook. In your opinion, how difficult an achievement was winning his championship match from his German foe, since he had to not only battle the injury, but also be deprived of his best offensive weapon? It’s an amazing achievement, but it was nothing to Joe. That dude was willing to die every time he stepped into the ring, even as an amateur. Boxing wasn’t a just job or a sport to him. It was his identity and he likened himself to a gladiator. He idolized the old-school killers like Harry Greb and Henry Armstrong and did his best to emulate their Spartan training methods and relentless fighting styles. Frazier fully accepted pain and suffering as the price of glory.

Just stumbled across an article about Dennis Andries, a guy I was unfamiliar with. The article seemed to indicate he was a throwback to an era now lost to us. Was wondering if you could elaborate on him, Dougie. Or if you were familiar would him and could shed some light on him for me.

P.S.: Some mythical matchups for you…

Marco Antonio Barrera vs Wilfredo Gomez @ 122 – Gomez by close MD or UD in a 12-round bout; final-round stoppage in a 15-round bout. It would be a GREAT fight.

Erik Morales vs Azumah Nelson @126 – Nelson by close UD in a GREAT fight. 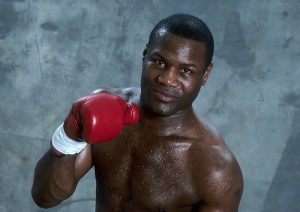 Just stumbled across an article about Dennis Andries, a guy I was unfamiliar with. The article seemed to indicate he was a throwback to an era now lost to us. Was wondering if you could elaborate on him, Dougie. Or if you were familiar would him and could shed some light on him for me. Andries was a strong, durable, well-conditioned boxer-slugger who was as awkward as he was game. I was impressed with his grit and resolve the first time I watched him fight live (his rematch with Jeff Harding on U.S. network TV in 1990), but prior to that WBC lightweight title-regaining victory I didn’t think much of him. The first time I read about him was the post-fight report on his showdown with Thomas Hearns in 1987 in The Ring Magazine. I didn’t see the fight live, but I figured the Guyana-born Londoner couldn’t have been that good if he lost his 175-pound title to a junior middleweight/middleweight who had turned pro at welterweight. And when I finally watched a VHS tape of the fight (a year or two later), Andries looked worse than I had imagined. To my admittedly inexperienced eyes he was just a raw, amateurish brawler. I also thought Hearns looked poor during the fight. I couldn’t believe that “The Hitman” had been extended 10 rounds by such a wild man. But when I read that Andries had outpointed Bobby Czyz, who I considered a world-class boxer, I thought there must be more to the British contender. And there was. I think Andries’ decision to hire Emanuel Steward as head trainer was smart move because the Detroit Wizard polished up his technique. Andries was a more refined boxer-puncher during his memorable trilogy with Harding. And by the mid-90s (when Andries was on his way out as a cruiserweight gatekeeper), I had come to appreciate his relentless aggression and wild abandon, in part from having more years as a hardcore fan, but also because I had begun to train at a pro gym (in Los Angeles) and I learned from first-hand experience that awkward fighters could trouble orthodox boxers. 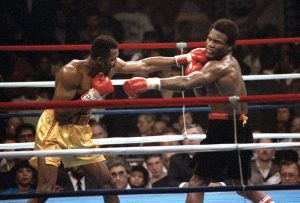 The Hitman was the first former 154-pound titleholder to win a major 175-pound belt vs. rugged Dennis Andreis. Photo / The Ring Getty collection

When I watch the Andries-Hearns fight now, I’m awed by Andries’ grit and resolve (I still can’t believe he got up from FOUR knockdowns in Round 6). I also notice his underrated craftiness. And I’m also reminded of how exciting Hearns was. He boxed well against Andries. His jab is arguably one of the best in the history of the sport. The only reason Tommy got nailed at all was because he was trying beat the titleholder into submission, but Andries had no fear or quit in him.