Ring Ratings Update: Castano climbs to No. 1 at 154, Joyce advances at heavyweight 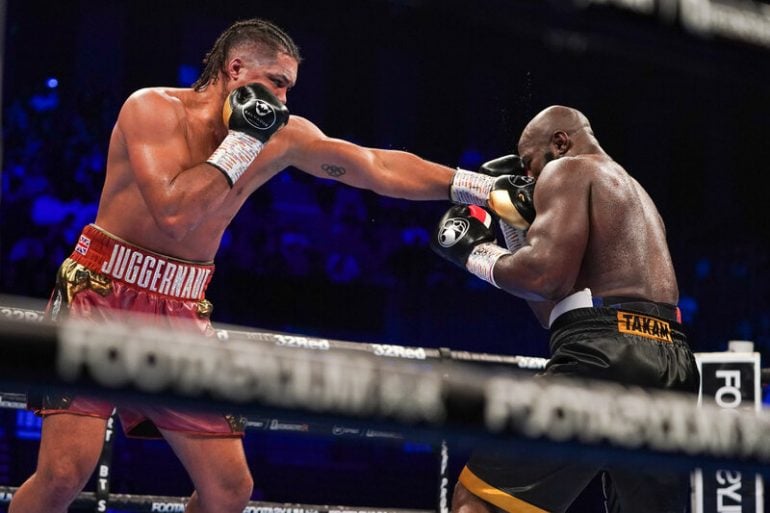 Junior middleweight titleholder Brian Castano jumped from No. 3 to No. 1 in The Ring’s 154-pound rankings by holding Ring/unified champ Jermell Charlo to a draw on July 17. One week later, Joe Joyce moved up one spot, from No. 10 to No. 9, in the heavyweight rankings following a sixth-round stoppage of battle-tested gatekeeper Carlos Takam.

The Ring Ratings Panel was unanimous in wanting to advance both Castano (17-0-2, 12 KOs) and Joyce (13-0, 12 KOs) in their respective divisions. Despite having to settle for a split draw against Charlo, most observers thought the 31-year-old Argentine deserved to win the undisputed 154-pound championship. Castano also owns a draw with highly rated Erislandy Lara, as well as decisions over Patrick Teixeira and Michel Soro.

Takam was the second former title challenger that Joyce has faced in his 13-bout pro career (the other is Bryant Jennings, who he outpointed over 12 rounds in 2019). The 35-year-old London native also owns stoppage victories over hot-prospect Daniel Dubois and badly faded former WBC beltholder Bermane Stiverne.

The main debates among the Panel centered around whether or not to shuffle the order of the 154-pound and heavyweight rankings in the wake of Castano’s and Joyce’s performances.

Panelist Martin Mulcahey, who has advocated dropping Jarrett Hurd in the junior middleweight rankings ever since the former unified beltholder lost a decision to unrated Luis Arias in a middleweight bout in June, sparked the debate with his Charlo-Castano comments. 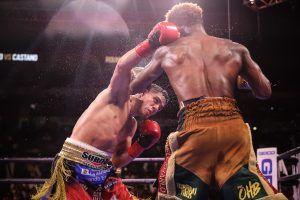 “I had Castano by three rounds,” Mulcahey said. “I can see by two rounds even a draw if you lean Charlo for every close round. We must move Castano to the No. 1 position since we can’t give The Ring belt to him on a draw. I would still like to see Hurd pushed down a notch in favor of Lara, given his loss (to Arias), even though it was a couple pounds over 154. (Lara) has looked better in recent bouts than Hurd. Yes, Hurd has that split-decision win over Lara, but that bout could have gone either way on judges’ cards as well.”

“Does anyone else have an opinion on a 154-pound reshuffle up top?”

“I don’t think we can just re-rank guys as we see fit after they didn’t fight,” he said. “Castano can and should move up. We had the opportunity to change Hurd’s ranking and we decided not to do that because he fought at middleweight. I believe arbitrarily re-ranking divisions is not a good precedent.”

Panelist Michael Montero and Yours Truly co-signed on Abramowitz’s statement.

Wainwright got the heavyweight debate started with a reshuffle suggestion tacked on the end of his Joyce-Takam comments.

“Joyce stopped Takam in six rounds, impressive result, although he got hit a lot, an awful lot,” said Wainwright. “He has a good chin and an awkward style. It’ll take one of the top guys to beat him. I would re-jig the last four places (in the heavyweight rankings) and have 7. Usyk, 8. Joyce, 9. Hunter, and 10. Rivas, because Hunter and Rivas are fighting a much lower level of opposition. However, I can also see moving Joyce up one place and keeping things as they are.”

Abramowitz replied: “Objectively, Joyce has a better heavyweight resume than Usyk. He should be 7th, Usyk should be 8th.”

Stated panelist Diego Morilla: “I am against reshuffling the top 10 in such extreme ways. In my view, the only guy who should move is the one who fought recently, regardless of how many positions he jumps (that’s for us to decide, but we cannot decide to move Usyk over the other guys if he hasn’t fought). So, I would move Joyce to No. 7 and move everyone else down and let Usyk make his own case in his next fight, which will happen soon enough.”

Montero and Gray agreed with ranking Joyce over Usyk but not as high as No. 7.

Heavyweight – Joyce advances to No. 9.

“I think people are giving Joyce too hard of a time,” said Mulcahey. “In other fights Joyce showed himself more versatile and a stiff jabber, but I think he knew Takam could not hurt him and thus paid little attention to defense going for a stoppage win over a much smaller foe. I still think Joyce is too slow for top three guys and Usyk, but I believe he should be rated over Usyk for now.”

“I agree with Castano going to No. 1 at 154,” said panelist Daisuke Sugiura. “It was really unfortunate that one judge didn’t give him a fair shake. I suspect this fight was the biggest opportunity of his lifetime, but I hope I’m wrong and he will get a rematch.”

ON THE FRINGE (by Wainwright, Mulcahey and Sugiura)

Lightweight – “Rolando Romero stopped overweight Anthony Yigit in seven rounds. He’s starting to get the wins to get consideration,” noted Wainwright. “Probably the back end of the 11-15 range right now.”

Added Mulcahey: “Romero is an odd character, and I think fans see that as well, booing a power-punching Hispanic boxer in Texas is kinda unheard of. Having said that, I am not sure Romero’s awkwardness will play at the very highest levels unless his power works against the best, which I doubt. Certainly, though, he’s on the top-10 radar, but I agree with Anson, 15 to 20 for now.”

Strawweight – “Ginjiro Shigeoka stopped fellow unbeaten Toshiki Kawamitsu in two rounds,” noted Wainwright. “Terrific fighter, probably our next guy in at 105. Also, Erick Rosa won a 12-round decision over Ricardo Astuvilca to claim an WBA interim title. Rosa’s on the fringes of the top 10.”

Added Mulcahey: “Count me in for the Shigeoka bandwagon. I’d have him at No. 9 in our rankings right now but I understand need to wait a bit longer.”

Added Sugiura: “Shigeoka’s talent is undeniable, a lot of people already regard him more highly than Masataka Taniguchi, who is at No. 10 (in our strawweight rankings). So, Shigeoka is probably one or two quality win(s) away.”

KEEP AN EYE ON (by Wainwright, Mulcahey and Sugiura)

Heavyweight – “German prospect Peter Kadiru has gotten up to 10-0,” noted Mulcahey. “He’s being moved slowly despite a very good amateur pedigree. He’s on the way-long-range radar for now ha ha.”

Added Wainwright: “Arslanbek Makhmudov demolished Pavel Sour in a round, he looks very impressive, and I don’t think anyone is in a rush to face him. Murat Gassiev stopped Michael Wallisch in four, still settling into the division. It will be interesting to see how he does as he moves up a level.”

Cruiserweight – “Ryad Merhy, who was in top-10 consideration couple years ago, has returned to action after two year layoff, still someone to keep an eye on for future consideration.”

Middleweight – “The limitations of Amilcar Vidal were exposed by Immanuwel Aleem, but I like Vidal although he could be a touch too slow for elite. Still on the outside looking for top-10 consideration.”

Junior welterweight – “Keep an eye on Jin Sasaki who scored a win (second-round KO of Kaiki Yuba) this weekend (July 17 – I’ve not seen video yet), but he looks the goods. Once you get above lightweight, many of the Japanese stars tend to falter but I think this kid can break through. Another one on long-range-radar with 10 wins.”

Added Sugiura: “As Marty noted, Jin Sasaki is an emerging Japanese prospect at 140, but I’d have to say he still has ways to go. He was knocked down twice, almost knocked out by a fellow undefeated fighter named Kaiki Yuba on Saturday morning (July 17) in Tokyo. He came back and proved again that his power is for real, but his defense and overall skill need to be improved (as you will see in the video I’ve linked). That said, he’s only 19, and supposed to be facing Andy Hiraoka (a Top Rank fighter) next for the Japanese national title. An interesting prospect for sure. Take a look at Sasaki vs. Yuba. Only 5 minutes but what an exciting fight.”

Added Wainwright: “Alberto Puello outpointed Jesus Antonio Rubio over 12 rounds to retain one of the million WBA belts on offer. No real inroads in what is a very strong division.”