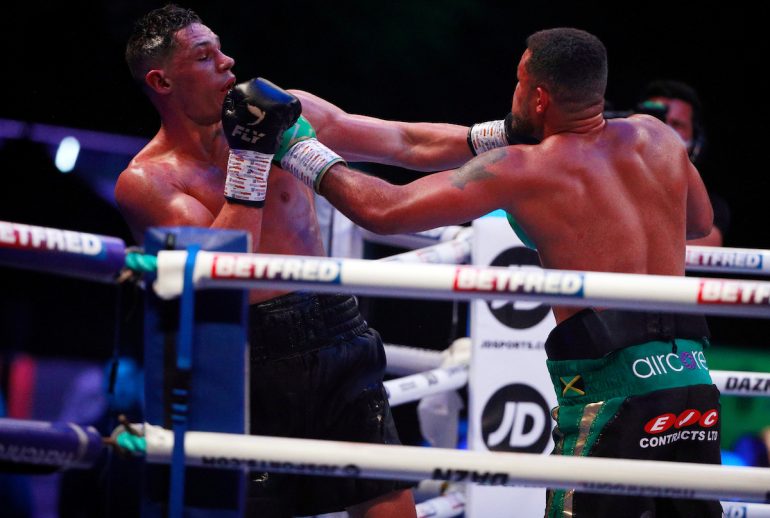 Chris Billam-Smith is now the British, Commonwealth and European cruiserweight champion after a hard-fought 12-round split decision win over Belfast’s Tommy McCarthy.

It was a close, hard fight and there would be few complaints if we get to see it again.

“Elated,” said Billam-Smith of how he felt afterwards. “It’s been a hard camp with some serious rounds but it’s worth it. I was better throughout and he was gassing early on.”

McCarthy landed the punch of the first round with a huge right hand near the bell that left Billam-Smith cloudy for the remainder of the session.

But the Bournemouth man was back in it in the second, operating behind his long jab as McCarthy failed to capitalise on his first round success.

They both landed early in the third, Billam-Smith scored with a solid left hook and McCarthy replied with a right hand.

It was intriguing stuff without becoming the bombs-away-thriller many had expected.

There wasn’t much between them in the fourth but the fifth was a big round for Billam-Smith. He started fast and McCarthy seemed, for a sustained period, to be in trouble. Then he stuck his tongue out at his fans and fought back. Still, Tommy couldn’t turn the tide of the round in his favour.

Billam-Smith appeared to have found his range in the sixth but he shipped a couple of right hands and McCarthy spent some of the round confidently on his toes – but blood came from his right eye by the end of the round and through the seventh the blood flowed freely down his cheek.

The eighth was the best of the fight up to that point. Both had success but Billam-Smith scored with three left hooks in quick succession and perhaps earned the stanza.

McCarthy’s left eye was closing in the championship rounds and Billam-Smith had more success when jabbing for points than looking for the type of shots that would end the fight because McCarthy was elusive, hard to nail and a threat on the counter.

Both tried to assert their dominance in the last. McCarthy found a home for some right hands but both fighters were held aloft by their trainers at the final bell, Billam-Smith by Shane McGuigan and McCarthy by Peter Taylor.

Further fuel was added to the contest in fight week when Shane McGuigan’s former fighter Carl Frampton joined McCarthy’s camp, and he was in the dressing room tonight observing Billam-Smith’s hands being wrapped.

The Manchester prospect is calmer in his work, more measured and controlled and seemingly not as overeager as he was in his first two fights.

He won a four-rounder against Jakub Laskowski, 40-36 for referee Mark Bates.

Hatton stormed into an early lead and started to break the Pole down in the first. Hatton was guilty of attacking in straight lines in Round 2 and he could have worked the body more than he did but Laskowski spoiled in the third and fourth, sparing himself the damage he’d taken in the opening two rounds by holding and moving.