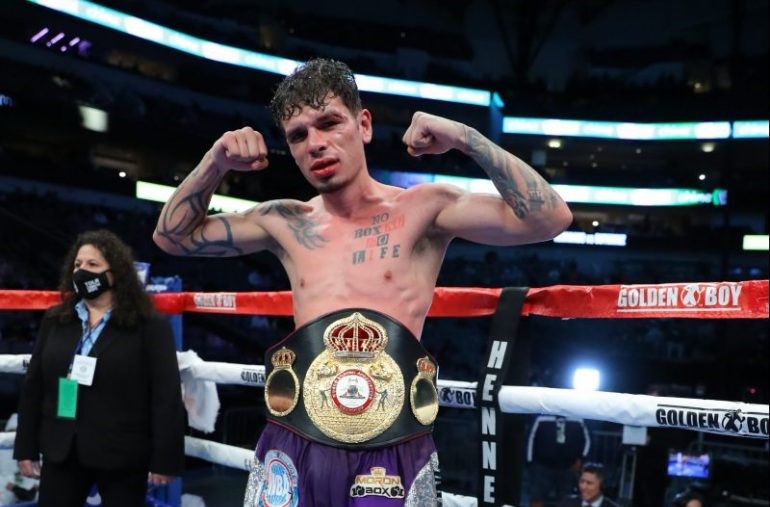 Despite scoring three knockdowns in their second encounter, Roger Gutierrez barely nicked the win over Rene Alvarado. But he is predicting a blowout victory in their upcoming trilogy.

“I will win all the rounds; I will throw lots of punches, and I will never be a fixed target,” stated The Ring’s No. 9 rated junior lightweight.

The slated 12-rounder is the penultimate scrap to the Top Rank on ESPN main event featuring a third encounter between junior bantamweights Joshua Franco and Andrew Moloney.

After suffering a seventh-round knockout in their first fight back in July 2017, Gutierrez promised to come back stronger, and “The Kid” roared back in style. He scored two third-round knockdowns and followed up with one final demolition in Round 12 to seal the deal. But all three judges scored the fight 113-112, which Gutierrez blamed on himself.

“I got a little overanxious in the second fight,” he admitted. “I dropped him three times and I got a little reckless trying to go for the knockout. I diverted away from the game plan.

“But now our strategy is to remain calm and composed. If he gets dropped, I will maintain the same pace. I will apply more pressure, but cautiously. We will correct the mistakes and we are doing that in our secret plan.”

Gutierrez disregarded claims that Alvarado may have underestimated him in the rematch.

“I don’t believe he underestimated me at all,” he added. “I became stronger and I have more experience. That is what made the difference, and I didn’t make the same mistakes that I made in the first fight.

“You saw the outcome. I won the fight; I dropped him three times.”

From getting knocked out to picking up the unanimous decision victory. Other than strength, what was the other key factor for Gutierrez?

“Rene Alvarado likes to come forward with pressure and we worked in camp on making sure not to be a stationary target,” he explained. “Rene is a very good inside fighter.

“My mind is on Rene. That’s what’s coming. After I beat him, I want to eventually fight for the unified championship.”

RENE ALVARADO OUT FOR REVENGE IN TRILOGY BOUT WITH ROGER GUTIERREZ