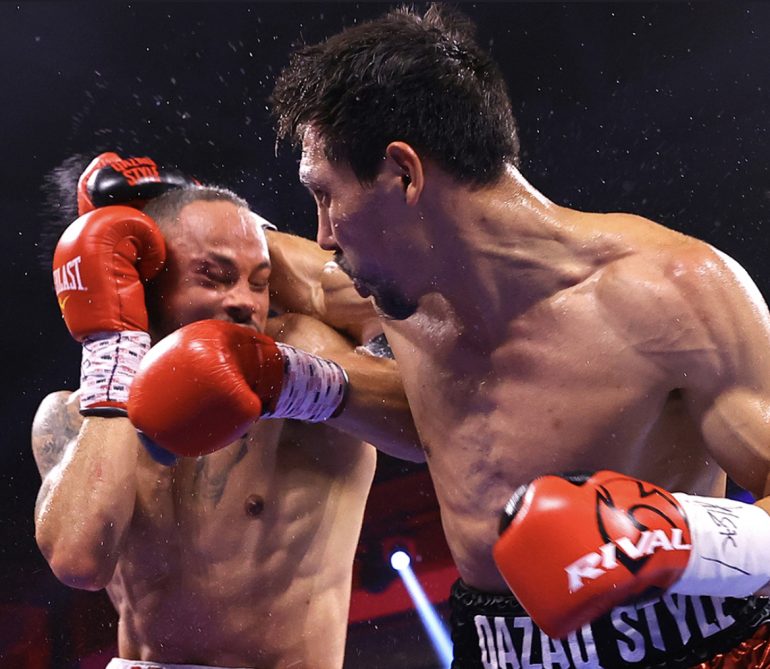 The fight was the co-feature of the Top Rank Boxing on ESPN+ card headlined by the Vasiliy Lomachenko- Masayoshi Nakatani lightweight bout at the Virgin Hotels Las Vegas and it was all Alimkhanuly.

The 28-year-old Alimkhanuly (10-0, 6 KOs), a southpaw based in Oxnard, California, dominated the fight from the outset, mainly with his powerful left hand. 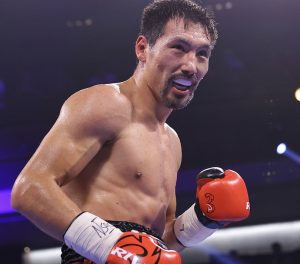 The veteran Brant is 30 years old, but looked closer to 40, as he wasn’t able to pull the trigger against the rising talent Alimkhanuly (above).

Alimkhanuly, a 2016 Olympian from Kazakhstan, knocked Brant (26-3, 18 KOs), 30, a Saint Paul, Minnesota, native based in Dallas, back with a stiff straight left hand in the second round and with a left to the body in the third round. While Alimkhanuly landed many clean shots he also completely stifled the offense from Brant, who just could not land anything of note.

In the opening seconds of the sixth round, Alimkhanuly landed a left hand to the head that knocked Brant to a knee. It was a dominating round for Alimkhanuly and afterward Brant trainer Brian “BoMac” McIntyre told Brant he wanted to stop the fight because he taking too many shots. He did allow the fight to continue and Alimkhanuly continued to outclass Brant, who was coming off a 10-month layoff, including with another stiff left hand that sent him into the ropes early in the eighth round.

After the eighth round and a discussion in the corner, McIntyre told Brant, “I can’t let you get hurt,” and signaled referee Mike Ortega to stop the fight.

According to CompuBox statistics, Alimkhanuly landed 83 of 293 punches (28 percent) while Brant was limited to landing just 22 of 166 shots (13 percent). 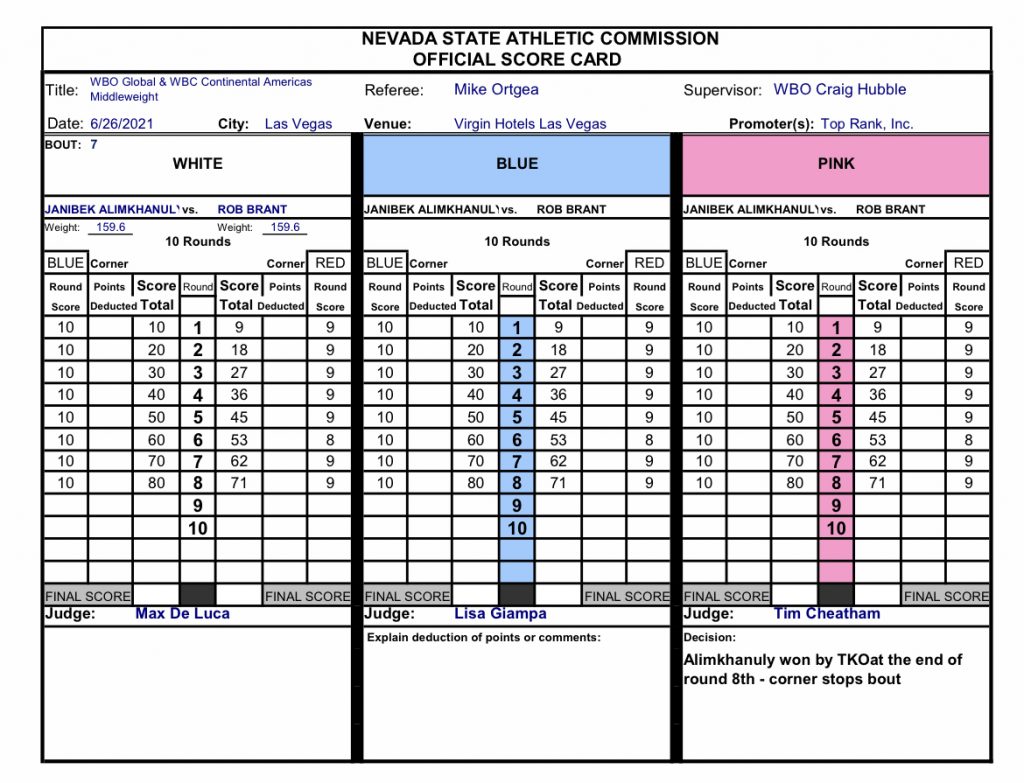 Alimkhanuly, who is trained by Buddy McGirt, has been on the fast track despite so few pro fights because of his deep amateur career.

Besides his Olympic experience, he was a 2013 world amateur champion and a 2013 and 2014 Asian Games gold medalist, among other accolades. Now he appears on the verge of being a serious 160-pound contender in the pro ranks.

Brant, however, seems to be on a different trajectory, having lost two of his last three fights, the first defeat coming by second-round knockout when he dropped his WBA secondary belt to Ryota Murata in their July 2019 rematch in Osaka, Japan.

Brant was hoping to defeat Alimkhanuly and parlay it into a rubber match with Murata or a one of the other titleholders, Jermall Charlo, Demetrius Andrade or Gennadiy Golovkin.

The judges scored it 80-72, 79-73 and 78-74 for Santillan, who was coming off a shaky performance in a 10-round majority decision win over former WBC lightweight titlist Antonio DeMarco last June. But he was much more dominant against McCalla.

He went right after McCalla in the first round, roughing him up with combinations and setting a fast pace that he maintained throughout the bout. He landed many hard straight left hands and combinations but McCalla, who has never been stopped in his 13-year pro career, took everything.

McCalla saw his two-fight winning streak come to an end.

Two judges had Saavedra winning by 60-54 shutout and one scored the fight 59-55.

Saavedra, in his first fight since February 2019, relied on his left hook and body attack to break down Rodriguez. Garcia knew his man was in trouble and implored Rodriguez in the corner before the sixth round, telling him exactly where he stood: “You’re giving this fight away! You need a knockout to win! Throw punches… You got to do something spectacular.”

Rodriguez was unable to follow the directions and Saavedra had himself the upset.

Diaz, who was mentored by Floyd Mayweather as an amateur and is managed by James Prince, dominated Jasso thanks to a big speed advantage that very obvious.

Heavyweight Guido “The Gladiator” Vianello, a 2016 Italian Olympian, stopped Marlon Williams in the second round.

Vianello (8-0-1, 8 KOs), 27, was coming off the lone blemish on his record, a six-round majority draw against Kingsley Ibeh in October but hammered Williams.

He appeared to drop Williams (6-2, 3 KOs), 37, of Lafayette, Louisiana, with an uppercut but referee Mike Ortega ruled it a slip. Then Vianello scored two clear knockdowns, first with a right hand to the body that dropped him to all fours and then with a right hand that sent him into the ropes and then to the mat at the end of the round.

After Williams got the minute between rounds, Ortega waved it off right after the bell to begin the second round rang because Williams was very unsteady attempting to come out of the corner.

Japanese southpaw Subaru Murata – no relation to WBA middleweight titlist Ryota Murata – made his professional debut and knocked out Keven Monroy (1-2, 1 KO), 21, of Stockton, California, in the second round of their scheduled four-round junior featherweight fight.

Murata, 24, who had a reported 68-12 amateur record, dominated his slower opponent before scoring a heavy knockdown with a clean left hand in the second round. Monroy went down to his rear, hit his head on one of the ring ropes on the way down and referee Russell Mora immediately waved it off at 1 minute, 42 seconds.

Monroy, who was in his second fight in 17 days since a four-round majority decision loss, loudly complained about the stoppage.

Lightweight DeMichael Harris took a couple of rounds to figure out his range against the shorter Jonatan Hernan Godoy, and then he took him out in the third round.

Harris (4-0, 4 KOs), 24, of Cleveland, showed off a potent right hand in the third round, using it to drop Godoy three times, first with a shot to the temple with about a minute left, again moments later and then to a knee just before the bell ended the round.