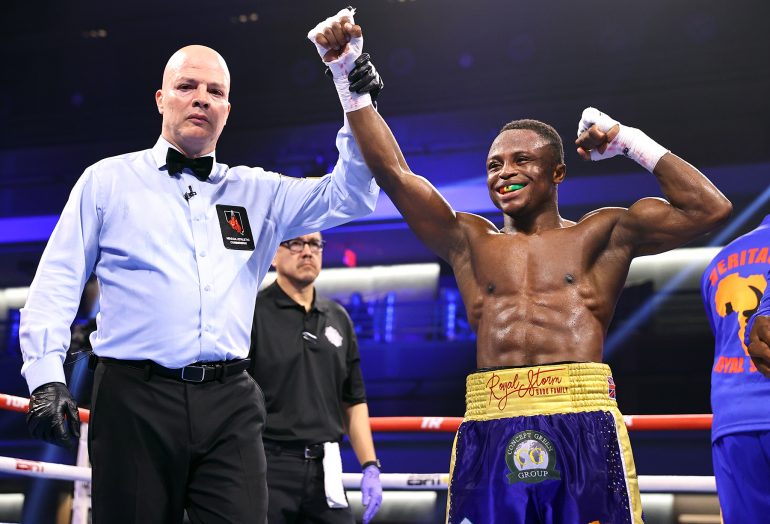 Isaac Dogboe, looking to get back on track with the buzz and momentum he enjoyed a couple years ago, scrapped with Adam Lopez in a 126 pound battle to kick off the TV portion of the card underneath the Naoya Inoue presumed showcase on ESPN, from Top Rank.

Dogboe, who stormed onto radar screens when he downed Jessie Magdaleno, then 25-0, and snagged the WBO super bantam crown in 2018, got out to a sweet start on Saturday night at the Virgin Vegas.  He dictated pace and tone and his power surprised Lopez. But the Cali boxer Lopez, nicknamed “Blunose,” adapted; he started moving more and had Dogboe backing up for much of the second half of the bout. After ten rounds, Dogboe got a majority nod, by scores of 95-95, 97-93, 96-94.

The crowd seemed mixed on the scoring. No one booed, but that Lopez (now 15-3) came on was fresher in their minds.

Buddy McGirt counseled the 25 year old Lopez, who’d gained all-round respect in a 2019 loss to Oscar Valdez, to switch it up. So Lopez moved more in the third, and then looked to impose himself on Dogboe, backing him up with a double jab and a more aggressive manner.

Dogboe (now 22-2), we were told in the lead-up, has re-set his career by sidelining his dad as trainer. He’d been hot, then decidedly not, when he dropped his crown to Emanuel Navarete, and then got stopped by Navarete in a rematch. He rebounded with a win over Chris Avalos last July, with Barry Hunter now cornering him, and wanted to keep showing growth in Vegas.

Lopez used those feet in the sixth, he was moving better, not sitting there pretty for the 26 year old Dogboe to land power shots. The action featured good work from each man in the seventh, Dogboe had the best connect, though, with a right uppercut that was a nasty head-snapper. We saw Dogboe in retreat, and working off the ropes a bunch, now, but that had him looking defensive, perhaps, to the judges. Lopez pounded his chest, asking Dogboe to trade, but the Ghana boxer stayed pretty smart, he didn’t start going hammer and tong. But then they did go tit for tat, at the end of the round. “Good stuff, real good stuff,” said blow by blow man Joe Tessitore. “You let him back in this fight,” Hunter told Dogboe after the round.

Lopez went at Dogboe in the ninth, he craved a stop. His uppercuts were working, and Lopez yapped at the Ghanian, and had him backing up. In the tenth, a left hook from Dogboe was crisp, but didn’t keep Lopez from advancing. McGirt wanted volume, not bombing, and Lopez gave it to him, calmly putting punches together, keeping Dogboe on the back foot. He’d switch stance, and land with a power shot, but Lopez knew awhile back he could handle it. He did handle it, and was optimistic that his rebound effort would be rewarded by the arbiters.

Dogboe spoke after the triumph: “I was pretty confident I’d get that decision because I controlled the fight from the first to the sixth rounds. I was posing too much and got a little too careless. Every now and then, I stayed in the pocket a little too long and forced too much. But, listen, Adam is a great guy. He showed the pedigree. We promised it would be a firefight. It takes two to tango.”

He was asked about those Ls he experienced. “A lot of people wrote me off after those losses to Navarrete and said I was overhyped. People like me, we don’t stay down forever. We get back up. I have to thank my team. They’re not just trainers, they are family. God wanted me to be there.”

In the chief support bout to the main event, Mikaela Mayer, holding the WBO junior lightweight title, handled Erica Farias and made it look fairly easy over the course of ten rounds that mostly looked similar to the one before. The Cali boxer after 20 minutes of work, heard the judges give her the edge, by scores of 97-93, 98-92, 98-92. 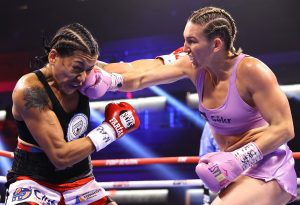 The Argentine Farias (26-4 entering; age 36) in round one looked shorter, by half a head, and she went right to work, choosing not to start slow, and ramp up. The 30 year old Mayer forced that, actually, she prepped with the jab and came behind it with a right repeatedly.

In round two, right out of that gate, Farias landed and buzzed Mayer a wee bit. The Argentine, an ex lightweight and super lightweight titlist, was landing cleaner than some expected would occur, Mayers’ defense wasn’t so on point as we’d seen previously.

In round three, the two traded late, and it was clear that this wouldn’t be a Mayer steam-roll job on a past-prime vet. In the fourth, Mayer had warmed up, acclimated, and realized that moving more would suit her better. It was subtle shift, she wasn’t running, rather she was just being a bit lighter on her feet.

Trainers Al Mitchell and Kay Koroma liked her output and ring generalship. Mayer got even more comfy in the fifth, she looked larger, fresher and in control. But Farias stayed in the game, her left uppercut from long range showed that her hand speed and accuracy were still to be respected.

In the sixth, Mayer’s combos were on message, she stayed focused and it looked like the fight was truly hers to lose…or more likely win. Farias knew that she’d need to land something strong, and sneaky, but her counters didn’t catch the winner off guard in round seven. In the eighth, Mayer mixed shots well, some work to the gut bothered Farias a tad. In the ninth, it was Mayer doing the better work, though Farias didn’t get discouraged. In the tenth, Mayer impressed with her wind. She wasn’t breathing too hard even while staying busy. No one thought that the judges would screw this one up.