Fighting rabbi Yuri Foreman back in battle, Saturday in Georgia, after beating Covid 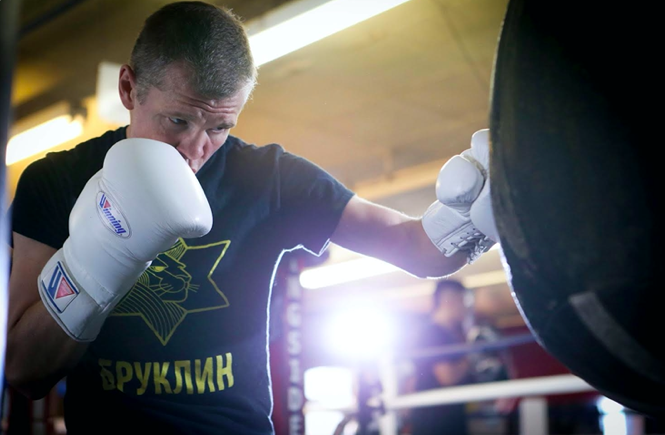 Foreman stayed on the shelf after a 2017 bout vs. Erislandy Lara. But he got the itch to compete again, and triumphed in a Dec. 2020 return to the ring. (Photo by Jared Sher)
18
Jun
by Michael Woods

It was almost funny, in a painful way, that Yuri Foreman got COVID while he was in Kentucky, getting ready to do battle against Jimmy Williams, another step in his last run at returning to prominence in the world of pugilism.

“Funny” because the fighting rabbi–for real, he is a legit rabbi–lives in Brooklyn, and NYC was an epicenter for coronavirus activity last year. The 40 year old righty who holds a 35-3 record as a pro managed to stay smart, mask up, socially distance adequately, and stay virus-free for a year. But the day before he was to fight Williams, March 6 in Kentucky, he started feeling ill and then a COVID test showed he was infected.

His fight got cancelled, and him and his wife Shoshana, who also contracted the virus, drove back to Brooklyn from Kentucky, so as not to risk infecting others on a plane ride. Now, the Foremans can look back, and almost laugh, the day before Foreman and Williams are again set to throw hands, this time in Georgia. 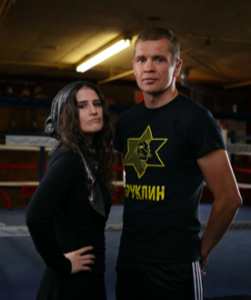 The Fighting Foremans. Or, more specifically, the managing Foreman, Shoshana, and the boxing Foreman, Yuri. (Photos by Jared Sher)

“I’m good, I’m recovered,” the fighter told me in the lead-up to the re-set fight week. “It was two days of discomfort, weakness. I ate quite a bit, a lot of bread, watched many seasons of Peaky Blinders. But I had a good immune system which did the trick. After my quarantine, I went for a run, just three miles, and I got a little gassed. I lifted weights, felt a little weak. Then, after a couple days, my strength started returning back. Now, I’m at one hundred percent.”

And that’s not a given, we’ve heard from more than a few athletes who admitted that long after they expected to feel fully healthy, they experienced some after-effects compliments of the stubborn virus.

I’m not surprised, Foreman is looking at the cancelled fight situation not as a debacle, epitomizing the ludicrousness of a trying year, but something else. “It was a blessing in disguise,” he said. “I cleared out a lot of people that were dead weight, some people in my life that were drawing too much energy.” He had a back and forth with a member of his team, now ex member, and it sounds like it got a wee bit heated. But, he said, it worked out, because he’s found some elements that more so suit his style. The fighter, who lives in Crown Heights, now treks to Sunset Park, Brooklyn and works with coach Greg Ardon, who has a gym on Fourth Avenue. “He is very calm, he has very good energy,” Foreman said.

It’s funny, he related, he was scrolling on social media, and saw a post from Ardon, as he was thinking about needing a change. “I think it was the universe communicating with me, so I called him up, we met, had a first training session,” he recalls. And even the decor at the gym meshed with his mindset. The first three posters he looked in the dressing area at the gym featured Muhammad Ali, Rocky Marciano and Bruce Lee. “Greg is not transferring his own nervousness to the fighter. In the corner, he’s very calm, a man of very few words. That’s perfect, someone who can hold their own shit. I don’t need to hear shit, and raised voice. I don’t need to hear that in the minute between rounds, I’ve been in boxing so long! I don’t need to hear ‘You look like shit!”’

For the record, the Belarus-born hitter debuted in the pro ranks in 2002, on Jan. 24 to be exact, fighting underneath Brian Barbosa on a Bob Duffy card at the Park Central Hotel in Manhattan.

Foreman is still in contact with and wanting to work with his old coach, Joe Grier, but Grier was waiting to get vaccinated, and wanted to stay safe, so Yuri told him to wait it out, make sure it’s all clear. 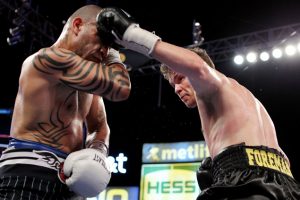 Yuri’s wife, Shoshana, has been functioning as his manager. It’s an education for her, she works full-time as a physician assistant, but it looks from the outside like it’s working. She has been nothing but encouraging, providing moral support and more, as she deals with travel arrangements and looks for promoters and situations that are advantageous to an ex junior middleweight champion who isn’t a pup.

“We are working with Terri Moss,” she said. “As far as promoters go, they all need to see what he can do, before they sign on.”

These two seem to be operating off the same manual, Shoshana told me that the cancellation in March had a heavy upside. “I see the blessing, it was liberating for Yuri,” she told me. “It helped us open out eyes, see who is on board and who isn’t. It’s better not to do business with quote unquote friends. We really have to stay on out toes, and stay moving forward. We both got knocked down a little bit, but we just continue forward.” Yuri summed it up this way: “Failure isn’t seperate from success, it’s part of it.”

I got a late update from Shoshana on Friday afternoon. “We weighed in, Yuri and Jimmy both weighed 153.6 pounds,” she said.

BoxRec shows 13 bouts on the slate to unfold at Buckhead Fight Club (3293 Buford Highway NE #500 in Atlanta). You can tune in to watch Foreman versus 17-5-2 Jimmy Williams via this stream.

No one is lost in a haze of over optimism. Shoshana and Yuri both know a 40 year old fighter goes one fight at a time, heck, one round at a time. They got past the virus together, now the hurdle is Jimmy Williams.