Hearn on AJ v Usyk, if we ever see Fury-Joshua, more 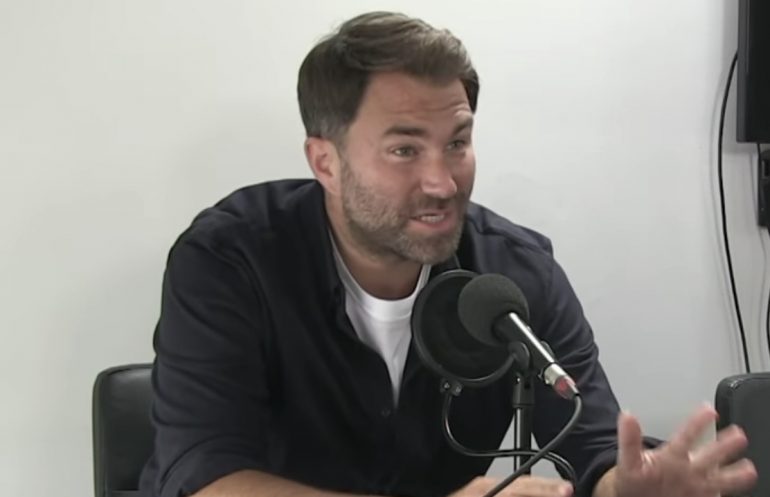 Promoter Eddie Hearn is certain Anthony Joshua will face Oleksandr Usyk on either September 18 or September 25.

It’s the last fight on Joshua’s existing deal with network giants Sky and Hearn said on Monday he’d heard back from K2, Usyk’s promoters, with a couple of minor contractual questions before they proceed and finalise the date and the venue, with Wembley and the Tottenham Hotspur Stadium in a straight shootout.

Confirmation is likely to come in the next couple of weeks. 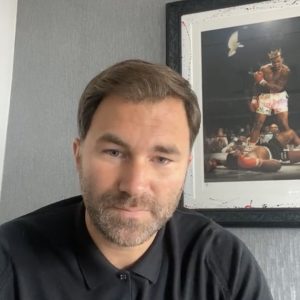 The promoter celebrated his 42nd birthday, but Tris didn’t ask him if he had a party and cake and such.

“I just don’t see any issues with that fight,” said Hearn.

“That’s the one you’re going to see next. I think AJ’s got it in his head that he wants to do a job on him [Usyk] and he knows how good Usyk is but he also knows people have been saying, ‘Oh, are you sure you want to take that fight?’ And he likes that. He’s already done three or four weeks of southpaw sparring up in Sheffield, he’s gearing himself up for a big fight and we just hope everything’s open [without Covid restrictions] because we want to do 60,000 or 70,000. Hopefully by the end of September it will be.”

The fight, however, will go ahead whether the stadium is at capacity or not.

“It’s always financially viable, it’s just down to how much the fighters are going to make,” Hearn said of the difference a substantial gate will make.

“I believe that fight does a million buys on pay-per-view, bearing in mind the [Kubrat] Pulev numbers and the [Alexander] Povetkin numbers, it’s a bigger fight than those two, so there’s big money in the fight. It’s not even the extra money in revenue, you want it full [for the atmosphere]. It’s a tough fight and I want to create the right type of environment. It will happen regardless of the crowd numbers but just for the event I’d like to see it full.”

Usyk has used social media in his bid to get Hearn to up the price he’s offering Joshua’s WBO mandatory challenger but that’s not a new bargaining position for Hearn. 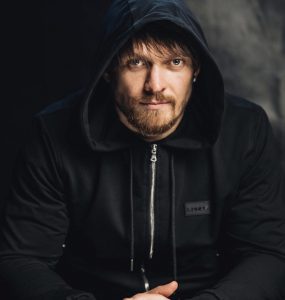 Usyk is perceived as a bigger threat than Povetkin or Pulev, so Hearn hopes they can get a large crowd, to match the quality of the matchup.

“We’ve been doing that for years and years, it’s the same now representing Canelo,” Hearn explained.

“Everyone says, ‘I want ‘this’ to fight him.’ No one says, ‘I want the opportunity.’ Usyk wasn’t saying, ‘I just want to fight for the unified heavyweight title.’ First thing he said was I want more money and that’s the same with Canelo but it’s the jackpot, isn’t it? You’re fighting AJ, you’re fighting Canelo, it’s the jackpot, so it comes with the job. Sometimes it makes it easier when you get the right ruling from the governing body on the split, and this was a good example of that, which made negotiations quite straightforward because it’s a fair split and that’s a lot easier if it’s put in black and white.”

Now Hearn has moved his stable to DAZN it will be interesting to see who features on the Sky Box Office undercard in September.

“Not something I’ve thought a huge amount about so far with it being the end of September,” Hearn admitted. “He [Joshua]’s got a number of fighters he represents as well, [Joshua] Buatsi, [Lawrence] Okolie, but they’ve got big fights coming up on DAZN so I’m not sure they’re going to be available. He’s got [Souleymane] Cissokho, Ramla Ali…”

Matchroom’s deal with the heavyweight star is also nearing its end but Hearn expects that to be updated and extended before too long, as well. 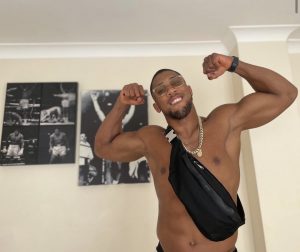 AJ sure does seem comfortable dealing with Hearn and it looks like those two will elongate their arrangement.

“There’ll be an announcement about our deal with him in the next couple of weeks, it’s a big deal between Matchroom and AJ,” Hearn added. “It’s big for both of us and big for our business as well.”

Hearn did say Joshua has several suitors courting him about a future network deal but said a Joshua who wins and impresses against Usyk will be able to call all of his own shots.

“It’s not something I think we’ll discuss until the Usyk fight is out of the way,” added the promoter, who turned 42 last week.

“We’ve had a great relationship with Sky, that’s definitely a discussion to be had, an extension with Sky, we know DAZN would be incredibly interested in what’s the biggest star in British and world boxing in Anthony Joshua. There’s a number of other platforms that have reached out to enquire about it as well. He’s in an unbelievable position, but there’s no point thinking about that until you beat Oleksandr Usyk, because you can start being clever about it and negotiating those kind of deals and get beat. All I know is when he beats Usyk, those deals are going to be coming thick and fast for him and that’s when we’ll have a conversation. He’s in a very similar position to Canelo Alvarez. He’s such a huge driver of pay-per-view and what would be subscriptions in the UK, the same with Canelo, they don’t need to be doing long-term broadcast deals unless it’s a deal that’s too good to be true. As long as he beats Usyk, he’s in an unbelievable position of strength.”

When asked whether the Joshua-Matchroom deal involved the heavyweight having a shareholding in the promotional outfit, Hearn said: “It’s a bigger strategy relationship across a lot of different stuff but we see him as part of the family, we’ve been with him since his debut [2013]. He is a huge part of the success Matchroom have had and vice versa and we are working across a huge amount of projects, not just in boxing but across all sports together.”

Fans familiar with a manicured, corporate image from Joshua were shocked when he took to social media after the Tyson Fury fight fell through, after it seemed on the verge of being announced, owing to Fury’s obligations to fight Deontay Wilder again.

Hearn acknowledged that it was a side of Joshua he’d not often seen.

“He never felt they wanted the fight. He actually thought Fury didn’t.  I’m not so sure, I met Fury and I believe he wanted the fight but he [Joshua] always doubted it would happen and when it fell through it was kind of like, ‘I knew it. You’re jokes, all of you.’ And it was very strange to see him do that [on Twitter] and he didn’t stop. One went out, then he fired off another. He was very vocal about it. He wants it bad, really bad, and that’s why we took the time to just extend the Usyk fight just a little bit. Because we all remember the Andy Ruiz fight when, with just three weeks to go, we just said Andy Ruiz [to come in for Jarrell Miller] and he said, ‘Yeah I want him, bring in a few sparring partners and do six-ten rounds and I’ll be ready to go’ and mentally he wasn’t prepared for that fight and he wasn’t in a great place physically and mentally anyway. But after it [Fury] fell through, he wanted three or four weeks just to readjust, reset camp and make sure he was fully prepared for Usyk.”

Fury first fights Wilder in Las Vegas next month in their trilogy meeting and has said he wants Joshua next. Hearn reckons Joshua doubts the big one between leading Brits will take place, even down the road.

“In his head he probably thinks the fight will never happen,” stated Hearn. “I’d like to be more hopeful than that and I do believe the fight will happen. But we could be sitting here in four months time and AJ’s knocked out Usyk, Fury’s knocked out Wilder and that fight is not twice as big as it was but it’s grown in to an even bigger fight and it’s worked out really well. Or one could get beat, or one looks bad, or the world just changes again…but I do get the feeling that if AJ beats Usyk, Fury beats Wilder and the world returns to normality that fight is just absolutely huge, so I’m hoping it works out for the best.”