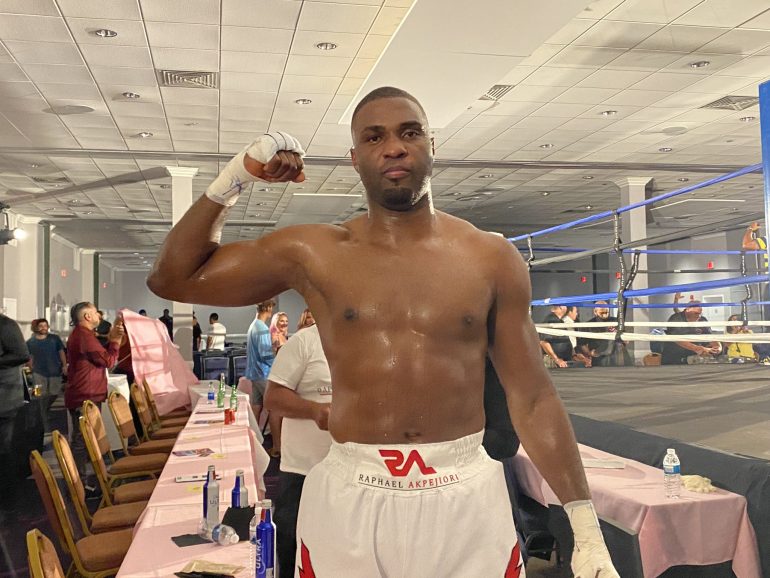 ORLANDO — Florida-based prospects Raphael Akpejiori and Armani Almestica made short work of their opponents Friday night, while a couple of out-of-town fighters suffered their first defeats.

Akpejiori (11-0, 11 knockouts), a 6’8″ heavyweight from Miami by way of Nigeria, was outweighed significantly by his opponent Brandon Spencer (9-19-3, 6 KOs), 249 pounds to 338 pounds, but it was clear early on that his body was more ready for competition.

Akpejiori backed Spencer to the ropes repeatedly, touching him to his ample body and landing with combinations as Spencer covered up and swung away with the occasional Hail Mary counter. Spencer was out of breath after the first round, and collapsed almost out of exhaustion early into the second. The fight was stopped shortly after when Spencer turned his back to his opponent.

Heavyweight Raphael Akpejiori (11-0, 11 KOs) of Miami remained undefeated with a second round TKO of Brandon Spencer (9-19-3, 6KOs) in Miami. Spencer came in at 338 pounds pic.twitter.com/MwIQhoCpib

Promoter Christy Martin, a 2020 International Boxing Hall of Fame inductee, was pleased with the show, which took place at the Avanti Palms Resort. The show was her fifth since the pandemic began last year. Martin has another show at the same venue on September 18, that will be headlined by Christian Camacho, the son of the late Hector Camacho Sr., and another on July 28 in Myrtle Beach, S.C.

“My thing was, if I could survive during this time, I can do this. That’s what I think I’m proving to myself, and hopefully to everyone else,” said Martin.

“It’s a little bit like my boxing career: I’m here to stay.”

Almestica, a 21-time amateur champion from Orlando, wasted no time getting rid of Weusi Johnson (3-19-1), punishing the Delaware fighter until he turned his back at the 59-second mark of round one of their four-round lightweight bout.

The southpaw Almestica (3-0, 3 KOs) turned professional last July, and has yet to see the second round in his career.

Armani Almestica (3-0, 3 KOs) blows away Weusi Johnson (3-19-1) in 59 seconds in his hometown of Orlando. The lightweight Almestica, 19, is a member of the Puerto Rican national team. pic.twitter.com/ogGNLHzQIC

Almestica was a rising star in the U.S. amateur scene but has since taken to representing the Puerto Rico national team with the goal of competing at the 2021 Olympics in Tokyo.

“Slick” Nick Sullivan (3-0, 1 KO) ended a nearly two-year layoff with a unanimous decision win over a tough Venezuelan named Gabriel Chacon (0-3). Two judges had it scored a shutout at 40-36, while a third found a round to give to Chacon, scoring it 39-37 for Sullivan.

Sullivan, a 2018 National Golden Gloves runner-up from Norfolk, Va., came out swinging hard with overhand rights and left hooks to the body before settling into a boxing rhythm.

Sullivan didn’t cut himself any slack, even after scoring a shutout on two cards.

“After two years I felt kind of sluggish. I normally fight way better than that. I’m glad I got the ring rust off and I’ll be back in action next month,” said Sullivan, who had 120 amateur fights.

Sullivan, who was recently released from his contract with Golden Boy Promotions, says he will be in the ring on July 3 in Dubai, July 24 in Philadelphia and August 28 in Myrtle Beach, S.C.

The night kicked off with an upset as Matt Gaver (2-5, 1 KO) dropped the previously unbeaten Daiyaan Butt (7-1, 3 KOs) four times en route to a sixth round knockout.

Gaver of Santa Maria, Calif. scored two knockdowns in round two, followed by another in the fourth and one more in the sixth to score the stoppage of the Philadelphia prospect at the 2:13 mark.

“The difference between this fights and the previous fights is, I couldn’t leave it in the hands of the judges,” said Gaver, who is coming off a four round draw with the unbeaten Nicky Vitone in April.

“I’ve been getting robbed in my previous fights fighting across the country in people’s hometowns.”

In what can be described as the Barrera-Morales of the Florida club circuit, Benigno Aguilar (5-0, 3 KOs), a Mexican-American from Crescent City, Florida, went to war with pro debut Brandon Sandoval, a Mexico native.

The unanimous decision for Aguilar – 40-36 on one card and 39-37 on the other two – did not reflect the competitiveness of the fight, which became heated at the weigh-in after Sandoval missed weight by over five pounds. Aguilar took the fight still, but his emotions were clear in the fight.

“We knew it was gonna be a war because we’re Mexicans,” said Aguilar, who claims Sandoval was 11 or 12 pounds heavier on fight night.

Aguilar is one of two Martin-promoted fighters in action on the card.

The other, Victorino Gonzalez (5-1, 2 KOs), was not as fortunate. The 28-year-old featherweight from South Carolina lost a hard-fought split decision to Marcello Williams (1-9) of Brazil. Two judges scored the fight for Williams – 59-55 and 58-56 – while a third had it 58-56 for Gonzalez.