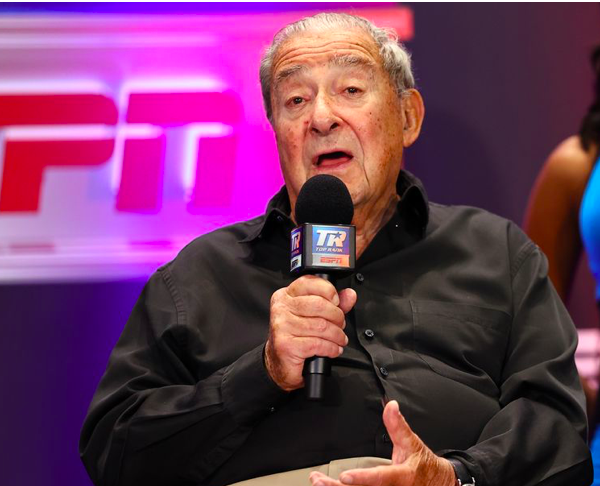 Yes, Bob Arum said, there are too many pay per views dotting the landscape. That said, the Las Vegas based dealmaker insists that the July 24 showdown between Tyson Fury and Deontay Wilder, seeking to shrug off the devastating KO loss at the hands of the Gypsy King in February 2020, should do bang-up business.

“There are too many pay per views, some of the fights we’ve seen and coming up don’t belong there,” Arum told RING.

The 89 year old wheeler-dealer said that next week there will be a press conference to toot the horns more for the third meetup between the heavyweight rivals. This one will land at T-Mobile in Vegas; the first throwdown saw the tall and talkative pugilists duke it out at Staples Center in LA in December 2018, with a draw result making a rematch an ultra no brainer.

The second battle played out at MGM Grand, and we wonder if the ripples from that disposition will affect what happens in the third tussle. Wilder looked out of sorts from the start, and was that because Fury has truly settled into his persona as a prize-fighter, learn and decide to use his size/strength to be the bully more than the evasive mover type or did the Alabama boxer get stale from his status as being “the man” in the division, resulting in sub-par prep for the title defense?

“The last fight did 850,000 buys, I think it does more this time,” Bob Arum said. “Fury has been spending so much time in the US, he’s almost been accepted as an American fighter.” The promoter promoted adeptly when he told me that “I’ve never seen such a feeding frenzy” when asked about the third throwdown between the 32 year old Fury, the WBC standard bearer, and Wilder, age 35.

Tix should be on pre-sale next week, perhaps Tuesday, for the rest of the week.

And in case you were curious, was Bob Arum sending shade at Floyd Mayweather and company, for being part of that PPV log-jam?

“No, that didn’t bother me at all,” he told me. “I’m not gonna spend time worrying about it, or spend time or money on that stuff. And nobody is holding a gun to anybody’s head. When the fighters say it’s an exhibition, that means it’s not real. If they fuck around and carry each other, who cares?”

Points taken; but I offered my main critique of the Mayweather-Logan Paul thing, that being Mayweather during fight week doing an interview with a betting outlet in which he promises to stop Logan and advises folks to bet the house on that. “Bet all of your money on it,” Floyd told Bet Online, as I touched on in this piece.

Goodbye, house, for people who took him at his word.

And no, I won’t summarily dismiss those people as “rubes,” because very often I get suckered by words, as I have a tendency to take people at face value when I should be holding all the grains of salt while absorbing the message.

“Stupid is stupid,” Bob Arum continued. “If you can’t see through all that you’re stupid.”