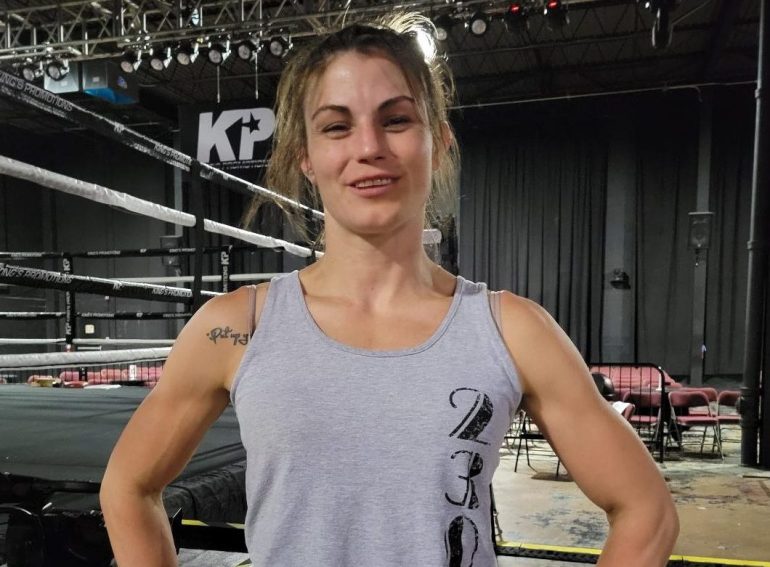 PHILADELPHIA, Pa. – Last Saturday, Brittney Elkin was holding court in the empty lobby of a boxing venue, Philadelphia’s 2300 Arena, talking to boxing people about mixed martial arts between the open time of a day-night boxing doubleheader. She gave her small, encircled audience a thumbnail bio of herself and about the big step she’s going to be taking next—Claressa Shields.

As the patrons began lining up in front of the 2300 Arena doors for the nightcap, Elkin returned back to her regular job for the evening—bartending.

Shields will be making her MMA debut as a 155-pound, 5-round lightweight fight against Elkin, fighting for the first time in two years, on the Professional Fighters League (PFL) tour on Thursday (ESPN2, 10 p.m. ET) inside the bubble of the Ocean Casino Resort in Atlantic City, New Jersey.

In her last fight, Elkin, who is 3-6 in MMA and will turn 35 this Friday, shattered her left forearm in three places making it look like a twisted spaghetti strand. She’s since heeled from that break, though she’s kept herself in incredible shape. She received the call on April 1, April Fools’ Day, from PFL matchmaker Ray Sefo while she was working an MMA fight at the 2300 Arena.

It happened to be an event where a fighter lost a finger, so Elkin was talking to Sefo, while in the background over the PA system, the announcer was asking the patrons to look for a missing ring finger.

It definitely belongs in the truth-is-stranger-than-fiction department.

“I was talking to Ray with all of this going on in the background and it was April Fools’ Day, so I was thinking about that, and your mind wraps around these things and before we got off the phone, I said ‘Yes,’ to fighting Claressa,” Elkin recalled. “I couldn’t get over the phone call, and I called Ray back to let him know it was April Fools and this better not be a f—g joke. I know my MMA career is not the greatest.”

Originally from North Dakota, Elkin has lived in Westminster, Colorado, for the last 15 years and just moved to Philadelphia, where she is the operations manager at the 2300 Arena, doing everything from taking tickets, to working the door and bartending, which was doing last week before leaving for the Atlantic City bubble in preparation for the Shields fight.

She’s been bouncing around different places, living in two different basements, one in Philly and one in Manhattan, New York. She has a background in jiu-jitsu and grappling, where she is 19-9 in ADCC.

“Everybody is making a big deal that Brittney Elkin is purple belt in jiu-jitsu, but MMA is not just jiu-jitsu,” Shields said during a Zoom conference call. “It’s boxing, it’s kickboxing, it’s wrestling. It’s all these different arts and I don’t think people should just count me out because I’m not a ground specialist.

“It’s about who can use what they know the best. I’ve practiced in all of them and I think I have a great chance to win on Thursday and have a great transition.”

Elkins knows her role—she’s supposed to lose. She scoffs at the notion. She had, what she describes, as a “vicious” eight-week camp. She says she’s in the best shape she’s been in years and she’s not waiting to stand there and get hit by Shields.

“Claressa has a lot more to cut than me, and bigger parts are harder to cut,” Elkin said. “I have to make weight, and I feel in great shape to do that. I’m so prepared, and there is no other way to say it, but this is most prepared I’ve been. I’ve always been a bartender; I’ve been in the (combat-sports) industry and there are a lot of plates to spin.

“I’m 5-11 and walk around at 180, so I blame a lot of my terrible fights on overcutting, getting down to 145 pounds, and I always say 10 pounds of that is my soul. I feel this time serendipity helped me. I have a nutritionist, I have the right coaches, I was in a new environment and that’s forced me to bring my standards up.

“Even when I broke my arm, I was training with my cast on in 2019, on the later, I was working again. I have full use of my arm and I am right handed, with left-handed abilities. I know once I get her down, I’ll be in good shape.

“I think how cool it is that Claressa got as far as she did in boxing. One thing I learned is MMA is a damning sport, and though I think it’s she wants to do both, it’s not an easy transition and I don’t wish her is good luck.”