David Morrell and Mario Cazares to clash at 168, June 27, on FOX 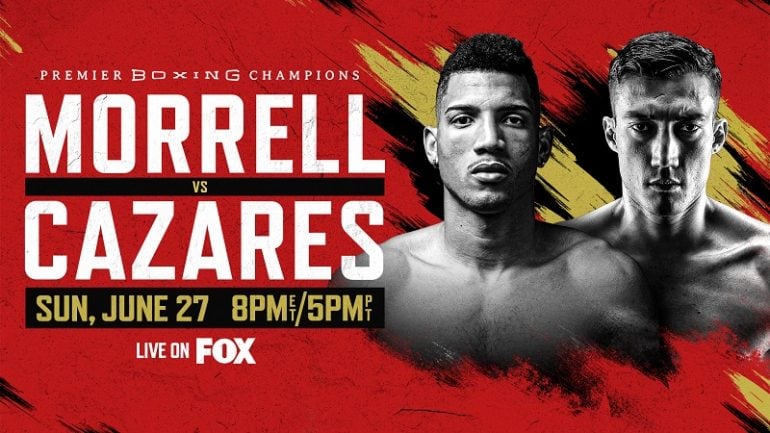 The 12-round bout will take place at The Armory in Morrell’s adopted hometown of Minneapolis, Minnesota, and will headline a three-bout “FOX PBC Fight Night” telecast (FOX, 8 p.m. ET/ 5 p.m. PT).

Morrell (4-0, 3 knockouts), who is originally from Santa Clara, Cuba, knocked out Mike Gavronski in his most recent bout, on December 26, in Los Angeles. His first professional fight took place in August of 2019 at The Armory, where he is again excited to fight before a live crowd.

“As always, I am grateful to my whole team for the opportunity to step into the ring once again at The Armory in Minneapolis,” said the 23-year-old Morrell. “This one is even more special to me because it’s my first title defense (Editor’s note: The WBA’s “regular” titles are unrecognized by The Ring) in front of my new home crowd in Minneapolis. I’m excited to feel the energy of the fans again and against a very good opponent. We’ve worked hard; now it’s time to have fun.”

Cázares (12-0, 5 KOs) most recently fought on September 25, in Tijuana, Mexico, not far from his hometown of Rosarito, defeating former middleweight titleholder Julio Cesar Chavez Jr. by technical decision. Cázares was outboxing Chavez before the bout was stopped in Round 6 after an accidental clash of heads produced a cut over Chavez’s left eye.

The 30-year-old will be fighting for the first time in the United States and, besides Chavez, has only faced one other fighter with a winning record. Cázares is confident he can pull off the upset victory.

“This fight is very important for my career,” said Cázares. “This kind of championship fight is what I’ve been working for. I definitely respect Cuban boxing and the style of Morrell. He’s someone with a lot of experience in the amateur field, who is now showing it in professional boxing but I love being the underdog and coming into my opponent’s hometown. The fans in Minneapolis and watching on FOX and FOX Deportes are going to be in for a surprise on June 27.”

Another fight featuring unbeaten prospects that could produce fireworks will support the Morrell-Cazares fight.

Cruiserweight Efetobor Apochi will square off against Brandon Glanton in a 10-round bout.

Apochi (11-0, 11 knockouts), who is originally from Orogun, Nigeria, and now resides in Houston, Texas, knocked out unbeaten prospect Deon Nicholson in Round 3 of his most recent bout, on April 17. The victory over Nicholson took place five months after the 33-year-old knocked out Joe Jones, also in Round 3.

Glanton (13-0, 11 KOs) mos recently fought on December 26, stopping Larry Pryor in the opening round, and has stopped seven of his last eight opponents. The 29-year-old, who is originally from Atlanta, Georgia, now resides in Riverside, California, where he is trained by Robert Garcia.

In the opening bout of the FOX telecast, unbeaten junior welterweight Omar Juarez (11-0, 5 KOs), of Brownsville, Texas, will face hard-hitting All Rivera (21-5, 18 KOs), of the Philippines, in a 10-round bout.