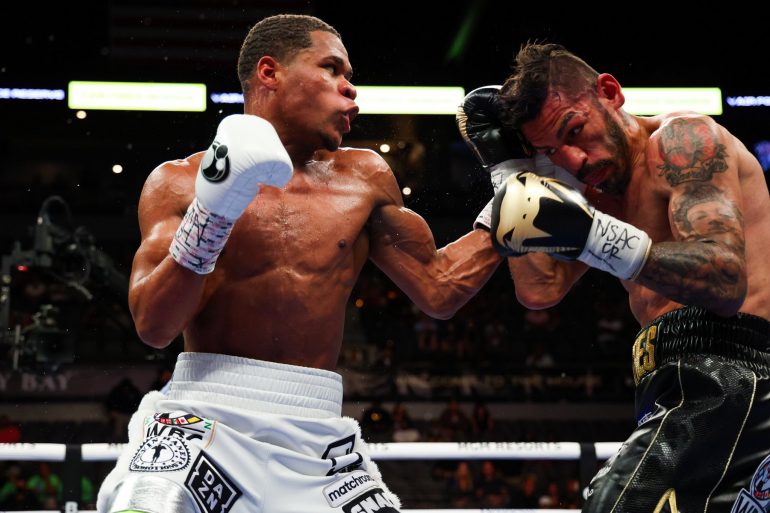 Haney was on point with his uppercuts but he was unable to hurt Linares.
29
May
by Ryan O'Hara

LAS VEGAS — Devin Haney was a massive favorite to retain his WBC lightweight title against Jorge Linares, and he did just that, but the 35-year-old veteran gave him a run for his money.

Haney, a 12-to-1 favorite in some places, faced adversity for the first time in his career as he was stunned at the end of Round 10 from a right-left combination that left him stumbling to his corner.

Devin Haney wobbles going back to his corner after the 10th! 🤯#HaneyLinares pic.twitter.com/6JNgW7gh98

However, “The Dream” eventually recuperated to defeat Linares by unanimous decision in the main event of a Matchroom Boxing, DAZN-streamed card at Michelob ULTRA Arena — the newly renamed Mandalay Bay Events Center — at Mandalay Bay Resort and Casino in Las Vegas.

“It was a good shot, but I wasn’t hurt,” Haney stated in the ring following his victory. “Sometimes when you get hit by a good shot, you have to be smart, continue the game plan, and I did that and got the win.”

Judges Steve Weisfeld and Patricia Morse Jarman scored the fight 116-112, and Dave Moretti had it 115-113, all for Haney, who defended his belt for the third time and survived the toughest test of his six-year professional career.

At the age of 22, Haney was elevated from interim WBC champion to full titlist in October 2019, when Vasiliy Lomachenko was awarded “Franchise Champion” status.

Linares, a three-division titleholder who once held The Ring lightweight championship, was outpointed for just the first time in his professional career (his previous five defeats have come by way of TKO). The Japan-based Venezuelan was hyped as Haney’s toughest test to date.

Haney was fighting for just the second time after undergoing right shoulder surgery that kept him out of the ring for a year following his unanimous decision triumph over Alfredo Santiago in January 2019. Last November, Haney outpointed former featherweight titlist Yuriorkis Gamboa in a performance that led some to criticize the rising talent.

Haney’s shoulder was not 100 percent going into the fight with Gamboa, but it was against Linares.

Linares could not have been more complimentary of Haney in the lead-up to the fight. He predicted a beautiful fight, and damn right it was.

According to CompuBox, Haney landed 215 of 675 punches (32 percent), while Linares connected on 116 of 620 blows (19 percent). Haney’s 215 connects were the most ever by a Linares opponent. Moreover, Linares’ 91 power shots were the most by any of Haney’s opposition.

Haney (26-0, 15 KOs) began the fight by coming straight at Linares, landing a series of jabs. He eventually began to look for openings upstairs. Once Linares blocked those punches behind a tight guard, he began to jab to the body.

Linares (47-6, 29 KOs), meanwhile, barely threw any punches and continually backed up against the slicker Haney, whose speed had an immediate impact. In round two, Haney snapped his head around with a four-punch combination. 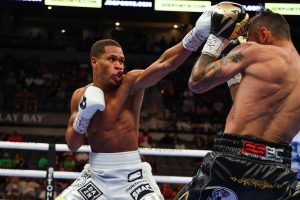 Linares continued to have issues working inside of Haney’s jab late in the second frame. He managed to land a jab to the body, but it didn’t have much energy behind it, as Linares was wary of Haney’s counterpunchng abilities.

When the fourth round began, Haney, fighting in his adopted home of Las Vegas for the third time, continued to come forward and stick his jab in the face of Linares, who had his best round of the night at that point.

He connected with a left hook to the body and followed up with a shot upstairs that got Haney’s attention. They both exchanged big shots until the bell rang to end the round. As the timer approached the two-minute mark in round five, a well-placed left hook to the body from Linares forced Haney to hold.

While Haney was clearly the quicker boxer and landing more punches, Linares had started to get the timing of his punches down.

Round six was only a continuation of what happened in the previous round. Haney backed Linares into the ropes with a combination that initially appeared to have hurt him. Instead, Linares returned with a combination of his own and snapped Haney’s head back with a left hook that left his younger opponent with a grin.

In round eight, Haney went back to clinical precision, using his jab from a distance and mixing in uppercuts to keep Linares at bay.

However, Linares was not kept in a cage in round nine as he ripped a wicked left hook that connected on the button. But Haney displayed a tremendous chin as he continued to move forward and exchange with Linares on the inside. And as the end round ended, Linares did a little dance as he went to his corner.

At the end of round 10, Linares drilled Haney with a right-left combination that sent him stumbling to his corner.

Haney held for much of the 11th round, much to the disdain of the fans in attendance. However, Linares also failed to capitalize when he had Haney hurt, though he claimed that he wasn’t.

Linares searched for the stoppage, but Haney, like Floyd Mayweather did against Shane Mosley in their 2010 clash, overcame adversity, got his legs back underneath him, and earned a hard-fought victory.

“I just kept smart, used the jabs, feinted, and landed shots in the 12th round,” Haney said. “You are going to get hit with big shots in boxing. I didn’t get dropped; I didn’t get hurt.

“You see fighters get dropped and get up from big shots and people praise them; I didn’t get dropped, I stayed on my feet, kept throwing shots, and closed it out.”

Haney then called out unbeaten Teofimo Lopez (16-0, 12 KOs), who holds the Ring, WBA and IBF titles (as well as the WBC’s “franchise” belt).

“I want to fight the best; I stayed focused on Jorge this week, I knew he was a tough competitor and I got the job done with the game plan,” he added. “If Teofimo wants to do it next, let’s do it for all the belts, the real undisputed.”

The contest was decided from the onset. Cameron was simply too fast, too strong, and too fresh for her shopworn opponent.

The time of the stoppage came at 1:38 when referee Celestino Ruiz stopped the fight. Hernandez did not seem to be in any immediate danger, much to the chagrin of the fans in attendance.

Cameron won the vacant title in October 2020 with a 10-round unanimous decision over previously undefeated Adriana dos Santos Araujo, who came into the fight overweight. As a result, only Cameron was able to win the belt, and she did so with ease, scoring a complete shutout of her adversary.