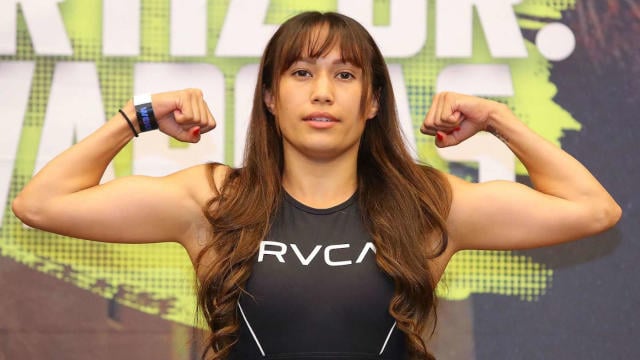 The 10-round bout will take place at Banc of California Stadium, in Los Angeles. Golden Boy also announced a compelling clash between unbeaten lightweights Hector Tanajara Jr. and William Zepeda.

All four bouts will be streamed live on DAZN.

“When it comes to undercards, nobody does it better than we do,” said Oscar De La Hoya, chairman and CEO of Golden Boy. “For all of us at Golden Boy, it is very important for fans to get their money’s worth when attending our events or watching from the comforts of their home. That’s why we are committed to providing a full night of competitive action featuring the likes of Seniesa Estrada, Hector Tanajara Jr., William Zepeda and many more.”

Estrada (20-0, 8 knockouts), who is ranked No. 1 by The Ring at 105 pounds, defeated Anabel Ortiz in her most recent bout, on March 20, in Fort Worth, Texas to win the WBA title. Prior to the victory over Ortiz, the East Los Angeles native had fought most of her recent fights at or below the 108-pound limit.

Tsunami (28-12-1, 16 KOs), who resides in Tokyo, Japan, made a successful third defense of the WBO title in her most recent bout, on April 4, defeating Shione Ogata by decision over 10 one-sided rounds.

The 36-year-old is unbeaten in her last six bouts since losing by unanimous decision to Arely Mucino, of Mexico, in September 2017.

Tanajara (19-0, 5 KOs), who resides in San Antonio, Texas, was scheduled to face Alberto Machado on March 18, in Puerto Rico, but had to withdraw from the “Ring City USA” boxing card due to an illness. The Robert Garcia-trained Tanajara has not fought since January 11 of last year, defeating Juan Carlos Burgos by unanimous decision.

Zepeda (22-0, 20 KOs) last fought on November 19, knocking out Roberto Ramirez in Round 5 of the first Ring City USA card. The 24-year-old from San Mateo Atenco, Mexico has stopped his last 12 opponents.

Also fighting in preliminary action will be Naoko Fujioka (18-2-1, 7 KOs), Japan’s only five-division world titleholder. Fujioka will defend her WBA female junior flyweight title versus Sulem Urbina (12-1, 2 KOs), of Phoenix, Arizona, in a 10-round bout.

Former amateur standout Mihai Nistor (2-0, 2 KOs), of Romania, will square off against Colby Madison (9-2-2, 6 KOs) in an eight-round heavyweight bout.