A tale of Christmas in Wonderland 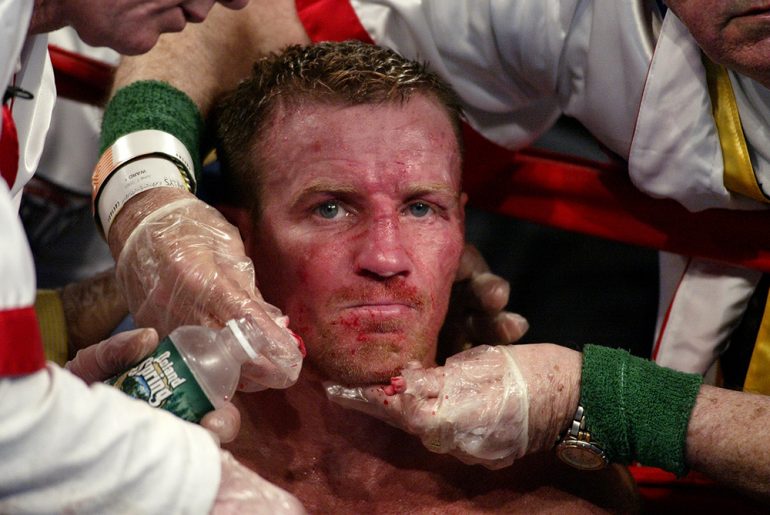 27
May
by Diego Morilla

The following story originally appeared in the August 2020 issue of The Ring Magazine. It recently received first-place honors for “Feature Under 1,500 Words” at the BWAA 2020 awards.

It is not down on any map,

They say that the hardest step in any journey is the first one.

This is true for any journey: the journey to freedom, to sobriety, to exile, to war and back. It was true for Caesar’s first step into the Rubicon river, for Frodo’s first step outside the boundaries of the shire, for Ishmael’s first step inside the Pequod in his yet-unknown quest for the murderous giant white whale that robbed captain Ahab of his leg and his sleep.

It is true for every boxer’s attempt to return to former glories, however successful or not. And it was true for Micky Ward’s return to action, too, on the night of December 30, 1995, when he took part of one of his least known fights against a totally unfit opponent in front of about 25 paying customers, after what could undoubtedly be described as the toughest four years of his life as a prizefighter.

In an impromptu cameo appearance as part of a hastily assembled bout sheet, Ward began one of the most improbable comebacks in boxing, taking a timid first step in a journey that may very well have ended up with him sinking in the roaring seas of Oblivion had he failed in this most modest of challenges.

The final result of the comeback journey in which he embarked on that day would be as spectacular as they come, but not a single thing of what transpired that night could have possibly predicted that outcome.

The trek from the Revere train station was particularly cold and desolate.

The silhouette of the Wonderland Greyhound Park was the only structure emanating light in the bleak December landscape in this coastal Massachusetts town in the outskirts of Boston.

The final destination was a difficult place to find, nonetheless. Where were the fights going to be held? Definitely not outdoors. And not in the gaming and dining salons, with their low ceilings, their numerous and intrusive columns, and their smell of stale beer and cheap cigarettes. I squinted through my wind-induced frozen tears trying to find the place. Nothing.

Finally, the noise and the lights signaled the entrance of the venue out in the distance. The fights would take place under the track’s grandstands, a large, half-dome white structure that resembled the ribcage of a giant whale. A most unusual location for a boxing show, placed strategically there to entice dog race bettors (occasionally peeking through the hallway windows) to take interest in the competitive efforts of two-legged, upright mammals instead.

With the ring cornered right on the crease between the grandstand and the floor level, and the chairs laid out around three sides of it, press row was literally a narrow dugout between the remaining side of the ring and a wall. Encroached on one side of the semi-circular shape of the makeshift stadium, we (writers and photographers) had a unique vantage point with no one behind us, and every protagonist of the event facing us instead. First-hand witnesses of the entire spectrum of behaviors in the fragile boxing ecosystem, with our noses stuck onto the glass screen of a bizarre diorama, a surreal terrarium containing some of the most colorful characters that pugilism could possibly create.

Some of them, as cliché as it may sound, were colorful enough to eventually inspire Hollywood characters, including an Academy award-winning one. But all of that and more hinged on Micky’s performance.

And he had his work cut out for him in the foreseeable future.

The ring walk for both fighters projected a palpable sense of fear in the air.

The first man in the ring for that one fight was a debutant, a 20-year old kid with the unenviable task of facing a man 10 years older and 30 fights tougher than him.

Climbing the steps of a professional ring for the first time in his life, Edgardo Rosario looked every bit the role of the presumptive loser he was hired to portray: a scrawny, wide-eyed, frightened, boyish-looking fellow wearing borrowed gear, with a brutally insufficient muscular frame and the unmistakable facial expressions of a guy who would rather be anywhere but there.

His companions for the soiree were there mainly to provide additional guarantees for the fight to become the gross mismatch everyone expected it to be. A man widely known as Cisco was a prominent part of his entourage, a Hartford, Conn. resident who was part-trainer, part-recruiter of human punching bags. In those wild days, Massachusetts was, thanks to one of the least controlling boxing commissions ever known, an open territory a very effective human meat trafficking operation that harvested its product among local construction and landscaping service personnel and served them up as fodder in boxing rings across the state. Double digit loss columns in their records were expected. Winning aspirations were not, and often they were outright unwelcomed. Rosario walked the steps into the ring as the catch of the day.

But fear, as abundant as it was in Rosario’s eyes, was even more present elsewhere. 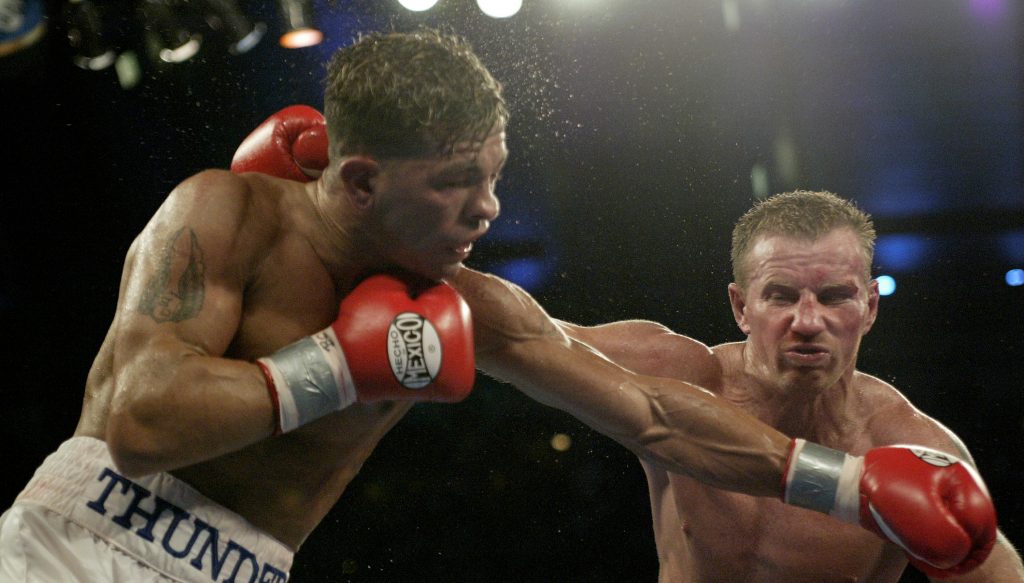 Wearing his customary white, classic-cut Everlast trunks with red trim that were as wrinkled as they could be, Micky Ward looked every bit the role of a former contender who hung up his gloves one loss shy of becoming a journeyman, now making a virtually unannounced comeback in a small club venue for one more fight and a payday that would amount to little more than gas-and-hotdog money.

He looked disoriented, almost alien in such a lowly environment for someone who had risen to the modest position of headliner in cable TV cards only to quickly fall in disgrace. Between those days and now, Ward had laid bricks and blacktop around his native Lowell, had fought a couple of 10-rounders, and had wrestled with his now-jailed former manager to free himself from his grip. He was now primed for one last what-can-you-lose attempt to finally make this boxing racket thing work. Convincing dog bettors to come sit at ringside and to trust a human with the task of providing a more entertaining option in exchange for a modest amount of their disposable income was just the first challenge.

Failing at that task would have been forgivable. Any other failures in the ring were simply not an option. Thirty fights into his 10-year career, Ward had hit rock bottom, and the only way was up. A demolishing stoppage was the only possible outcome.

And he got it, in brutal fashion.

The thud of his first body punch carried the sound of a slightly deflated soccer ball hitting a concrete wall after being spewed by a gigantic air cannon. Rosario wouldn’t last much longer. He would take just a couple of more punches, thrown during a stretch of time barely long enough to allow a portion of the female wing of Ward’s family entourage to be ejected from the premises due to their increasingly unruly behavior.

Because they understood it too, you see. Every one of their trips to the gym, every amateur fight, every training session, every aspiration and every dream that the Ward clan had placed on Micky was on the line, and from now on every chance to cheer on him as he reached for the harpoon to finally kill that white whale could be their last.

His hopeless foe would surrender soon enough, and the fight would be over. The antics of Micky’s mother and sisters (however diluted, aggrandized and/or otherwise embellished) would end up being portrayed in an Oscar-winning motion picture. For his meager efforts, Micky collected $150 in cash and a check for $250 that he was never able to cash out.

And after this most modest of successes inside this big whale belly under the stands of a race track, Ward would move on to bigger and better things. But not before surviving more than a dozen dramatic nights such as this. Facing fearful odds against younger, unbeaten fighters. Losing one, winning one, and then some more of each. Playing the role of Rosario against enemies bigger and better than him, only to turn the tables on them and moving on. Clashing head-on against his limitations and punching his way past them, overcoming storm after storm in search for the elusive prize.

Five days after Christmas, and about one hundred and fifty years after the fictional Ishmael embarked on the Pequod in nearby Nantucket, Ward held on to the driftwood of his once-promising career and lived on to fight one more day.

Eight years go by. It is now early June. Christmas is as far away in the calendar as it can be, in either direction. Micky walks into the gigantic domed structure of the Atlantic City Boardwalk Hall. The moon projects the shadow of its whale-like shape onto the sand, in the distance, and into the sea. Inside the ribcage of this new whale, a million-dollar payday beckons. Somewhere in Massachusetts, the Wonderland race track lays abandoned and half-demolished already. Micky is now fighting on the right side of the grandstands, with the entire world as his audience.

There is one Lord that is God over the Earth, and one captain that is Lord over the Pequod. There are no maps for the journey to the true place that Micky Ward set out to find.

The place, in due time, found him instead.