Women’s Ratings update: Zulina Muñoz hangs on at No. 1, Hardy out and Meinke in at 126 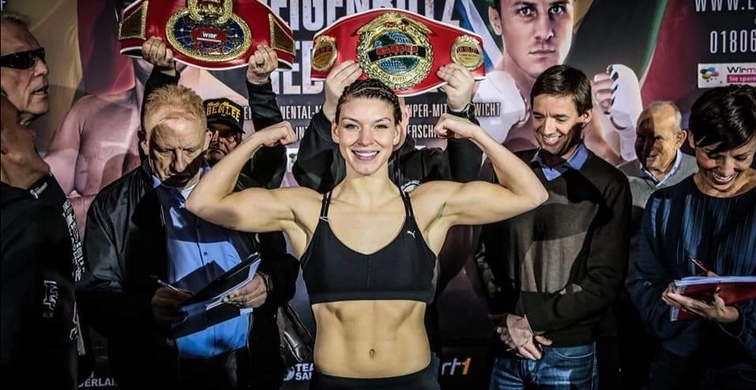 Nina Meinke
19
May
by Diego Morilla

An interesting weekend of women’s boxing caused only minor changes in The Ring’s Women’s Ratings, but it could have been much worse.

Fighting at home in Mexico, Zulina Muñoz, one of the most decorated veterans in the game and current No. 1 at bantamweight according to our ratings, was supposed to have a relatively easy fight against the relatively inexperienced Isis Vargas in a stay-busy eight-rounder. But Vargas never got the memo, and took the fight to Muñoz throughout, keeping the former multiple titlist on the defensive and scoring the best punches of the night.

Vargas, however, failed to convince at least two of the judges, who gave the nod to Muñoz in a two-point split decision.

“Zulina Muñoz has Hall of Fame credentials,” said Mark Jones, noting that Muñoz’s all-time wins (53) and stoppage wins (30) place right in the podium of those statistics in the history of the sport, but he stopped short of claiming that Muñoz deserves to top the rankings based on the current landscape in the very competitive bantamweight division. Muñoz’s demotion, however, will have to wait until she is defeated officially – or until another fighter proves worthy of taking over the top spot in the division.

The one division in which a few names were moved around was featherweight, in which one of the game’s most vocal ambassadors suffered a listless loss in a fight that she was expected to win handily.

“Having watched her train at Gleason’s Gym over the last few months I can certainly attest to her commitment to the game, from sparring Melissa Hernandez at 5:30 in the morning 3 days a week to all of the rest,” said boxing historian Malissa Smith about her gym mate Heather Hardy. “That having been said, Hardy’s faults remain and otherwise she was sluggish, and had no real game plan in evidence or response to what was coming at her from a very technical and highly versatile Jessica Camara.”

Most panelists agreed with that vision, and even though Hardy’s loss to Camara took place in the lightweight division, the combination of a bad loss and Hardy’s talk of an imminent retirement prior to the bout led the panel to decide to drop Hardy from her position in the featherweight ranks, the division in which she had her previous bout (a loss to Amanda Serrano back in September 2019).

“Her legs were gone after the fourth round, and she was fortunate that Camara isn’t a puncher,” said Jones, who then nominated Elina Tissen as her replacement at the bottom of the Top 5, considering the fact that Jelena Mrdjenovich will now be bumped up from No. 5 to Hardy’s now vacant No. 4 slot. Boxeo con Lipstick’s Wildalys Figueras-Snow disagreed, favoring Nina Meinke instead. “Although she lost to Tissen a few years ago, she has had more boxing activity and has a good winning streak,” said the Puerto Rican writer, in justifying her choice.

Argentina’s Yesica Palmetta agreed by indicating that “the German (fighter) had a good presentation against Katie Taylor despite the final result, and I think it is good to give her the opportunity at 126,” while Smith added that “(Meinke) has certainly improved since her TKO loss to Taylor and I thought she was truly a contender in the Tissen fight.”

After a very close vote, Meinke edged Tissen for the No. 5 slot by the slimmest of margins.

Also in action during this week were Melissa St. Vil (defeating Olivia Gerula by decision in eight rounds in the lightweight division) and Ewa Piatkowska (who scored a win in the welterweight division back in her native Poland). Both fighters are on the verge of entering the Top 5 in those divisions, which are currently loaded with some of the most talented fighters on the planet.