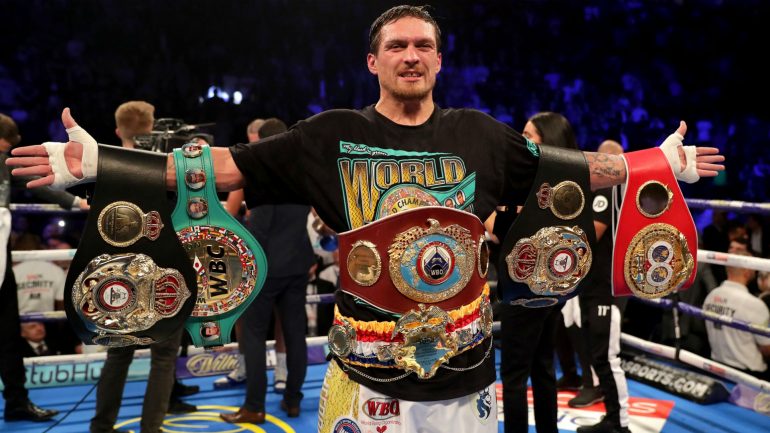 18
May
by Joseph Santoliquito

As the battle for what heavyweight fights what heavyweight next between world champion Tyson Fury, IFB/WBA/WBO titlist Anthony Joshua and former WBC Deontay Wilder, a new contender is now pushing into the fray.

The Ring has obtained a letter from “Team Usyk” demanding that their fighter, Ring’s No. 10 rated heavyweight Oleksandr Usyk, should be the mandatory challenger to WBO titlist Joshua.

All of this comes after it was revealed on Monday that Judge Daniel Weinstein ruled that a third fight between Wilder and Fury must occur before September 15.

The arbitration ruling places into question Fury’s blockbuster with Joshua on August 14 in Jeddah, Saudi Arabia.

Usyk’s inclusion into this whirlwind will no doubt muddy the waters even more.

The letter is below:

Please be advised that we have been retained to represent  Oleksandr Usyk, along with my colleague John Hornewer. This office will handle litigation should the need arise.  Unfortunately it appears more and more likely we are heading in that direction by the day.

Mr. Usyk has been the mandatory WBO contender since June of 2019, approaching two full years.  The last WBO mandatory was in September 2018 . Yet Mssrs. Fury, Joshua, Wilder (perhaps) and those associated with them along with the WBO are simply ignoring Mr. Usyk’s rights.

Mr. Fury and Mr. Wilder have been in arbitration  for  a very extended period. The arbitrator has now ruled, granting injunctive relief and requiring that the Fury side honor a contractual commitment to Wilder. While the Fury side professes surprise at this, the result follows the principles laid down in in a case I was intimately involved in, to wit Lewis v. Rachman, 147 F. Supp. 2nd 236 (S.D.N.Y. 2001) so it should be no surprise. Now we read that the Fury side is attempting to “buy off “ Wilder, a  result which in our view would be a slap in the face to the Arbitrator who found there to be irrepairable harm.

There are things we know about the evidence and things we do not. We believe that the contract which was upheld by the Arbitrator did not require that the WBO belt be at stake.  This takes us directly  to the rights of Mr. Usyk.

You cannot have a mandatory lay fallow for years on end. We refer you to a seminal case, Duva v. WBA 548 F.Supp 710 (D.N.J. 1982), a case which I handled at the Circuit Court level and which changed the playing field entirely with respect to the mandatory rights of Boxers. Wrote the Honorable Herb Stern:

There is no question that a professional boxer like Ayala is entitled to rely on his ranking and on the benefits that go with it under the WBA Regulations. Nothing can obscure the fact that Ayala’s position as the third-ranked fighter in his weight class was earned only after a grueling struggle. No court can be oblivious to the kind of day in and day out punishment to which boxers subject themselves in order to become champions. Demonstrating the most demanding kind of physical discipline, they literally pound away, at great physical danger, in a single-minded effort to move up in the rankings. The WBA’s ranking of plaintiff as the Number Three contender is its recognition of his dedication and success in advancing within the ranks. In the truest sense, Ayala has earned his ranking by sweat and blood.

Regulation 6 of the WBA Regulations is a means of guaranteeing that the ranking that a fighter has struggled to achieve means something. Regulation 6 is the WBA’s commitment to the athletes it oversees that the road to the top will be fair; that, under the circumstances under which Moore holds his title, mandatory title defenses will go to fighters in the order in which they are ranked. This reading of Regulation 6 can come as no surprise to anyone, and least of all to the WBA. The preamble to its Regulations dedicates itself to ensuring that “all those boxers” who “by *719 their contributions of time, effort, risk and resources sustain the profession in existence” have the benefit of a “firm, intelligent and objectively administered control of the World Championships of boxing.” Regulations, Preamble, ¶¶ 3, 4.

The language of Regulation 6 is clear and unambiguous: it means that plaintiff Ayala should be able to rely on the fact that as the third-ranked contender, two and only two men now stand between him and his turn for the title. This Court has no doubt that Ayala has a protectible property interest, as created by the WBA in Regulation 6, in having the opportunity to fight for the championship before any lower-ranked boxer.[1]

Judge Stern focused on the rights of boxers to their rankings and the rights which come with those rankings. Just as Ayala earned his ranking by “sweat and blood”,  so too has Oleksandr Usyk.

We also refer to Schultz v. Botha, IBF, et. al. 105 F3rd 127 (1997). This case involved the rights of a mandatory contender where a Champion has taken steroids  in the prior bout. That case held that there was a common law right through the law of private associations for Fighters to be treated fairly by ranking organizations.[2]

As a result of these two cases numerous fighters got their title opportunities when Courts (or arbitrators) upheld their rights  including Evander Holyfield,  Lennox Lewis, Michael Moorer and many others.

This brings us to the WBO’s enforcement of its mandatory. Through numerous letters  and emails my colleague John Hornewer has been attempting to get  Mr. Usyk’s mandatory rights observed.  I was told by the WBO President  that if a binding contract for a Fury / Joshua bout was not produced by the end of last week (Thursday), the WBO would Order the Joshua Fury mandatory. We did not write this letter prior because we never expected there to be a binding contract so its existence was  relevant only in the sense that when not produced the threat of litigation would be moot. However, it is apparently not moot as clearly no binding contract exists and as yet the WBO has not directed the Joshua / Usyk mandatory.[3]

We do not care if Mr. Fury fights Anthony Joshua[4]. We do not care if he fights Deontay Wilder. We do care if either fight impairs in any way the right of Oleksandr Usyk to the next WBO title bout.

We therefore demand that  the WBO respect  the rights of Oleksandr Usyk and immediately direct Joshua to fulfill his mandatory obligation or to give up the title. We demand that the promoters and managers of Mr. Fury, Mr. Joshua, and Mr. Wilder  cease immediately in any actions which could further delay Mr. Usyk’s mandatory title opportunity.

This letter shall also serve as a “retention letter” directed to all recipients and their clients. This requires that all documents in whatever form (included but not limited to both paper and electronic formats relating in any way to a Joshua / Wilder bout, a Joshua / Usyk bout,  a Fury/Wilder bout, communications with any person or entity ( including but not limited to WBO Officials regarding same), and relating to the designation of Mr.  Usyk as mandatory not be altered erased or otherwise destroyed  for use should there be litigation.

To the extent that the recipients of this document represent Mr. Fury, Mr. Joshua, and Mr. Wilder I ask that the contents be conveyed to them

All of Mr. Usyk’s rights and arguments are reserved.

[1] Mr. Arum, co promoter an  of Mr. Fury, and Mr. Finkel, co manager of Mr Wilder should remember this case well as each, on opposing sides, submitted affidavits.

[2] It should be noted that the Court expressed puzzlement as to why the case was not brought on a contract theory. This was precisely because we were seeking a broader ruling (which we got). Rules can change but concepts of fundamental fairness cannot be changed.

It is noteworthy that it was this case which caused a referral by the District Court Judge to the FBI, ultimately resulting in convictions of high ranking IBF officials, including its president.

[3] To be very clear, a contract between Joshua and Fury does not change the rights of Mr. Usyk, nor does any contract between Mr. Fury and Mr. Wilder. Mr. Usyk’s rights are entirely independent.

[4] If Joshua wishes he can give up the WBO title to fight Fury.