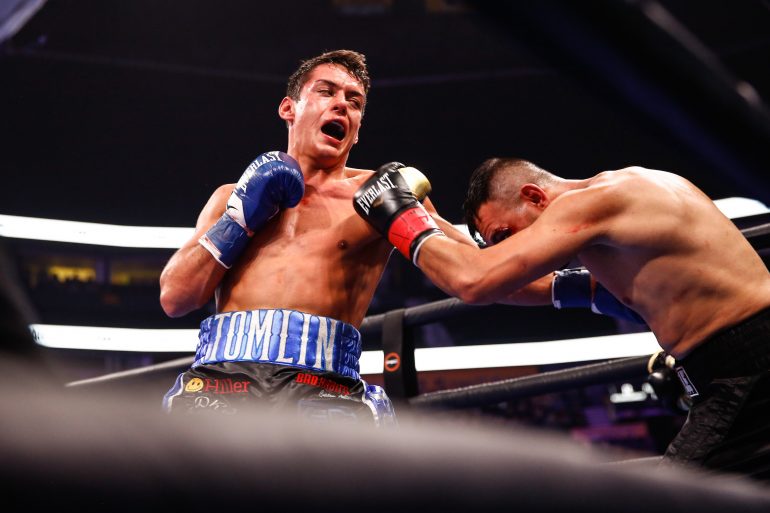 Photo by Stephanie Trapp/TGB Promotions
12
May
by Ryan O'Hara

The sports capital of Tennessee will be the host of “Ladies Fight” on Friday, but the event will also feature one of International Boxing Hall of Fame promoter Lou DiBella’s newest signees.

The event will be headlined by former 126-pound titlist Heather Hardy, who will return to the ring for the first time in 20 months against Jessica Camara in an eight-round lightweight affair at Embassy Suites in Murfreesboro.

The undefeated Tomlin, who hails from nearby Ashland City, accepted the fight on four weeks’ notice.

“I always stay ready, and I’m always in the gym,” he told The Ring. “It’s more of a mental thing when it’s short notice.

“We had a really good camp; a short one obviously, but I stay in shape year-round. I didn’t even have to think about it. We jumped right in and said, ‘We’re ready to go.'”

The 21-year-old Tomlin (10-0, 6 knockouts), who is coming off a first-round knockout of Ricardo Davis Ocampo on March 4 in Mississippi, is not only excited to fight in his home state for the seventh time, but he is also looking forward to facing an experienced veteran.

“This is a good resume fight for me,” Tomlin continued. “When you look at his record, yes, he has 13 losses there, but if you look at who he has fought, he has been in there with some tough guys.

“I’m expecting a tough fight, but I feel great, and I’m ready to go.”

Luckey has won four of his last five fights but against mediocre opposition. Last December, he stepped up against rising southpaw Frank Martin (13-0, 10 KOs) and was knocked out within five rounds.

We also asked Tomlin to describe the most beneficial to his development as a fighter thus far in his career.

“Going the distance,” he said. “When you go the full distance with a guy, you really see what you need to work on.

“It’s one thing to knock a guy out in a round, but when everything is on the line, and the crowd is there, you’ll see everything that needs to be improved.”