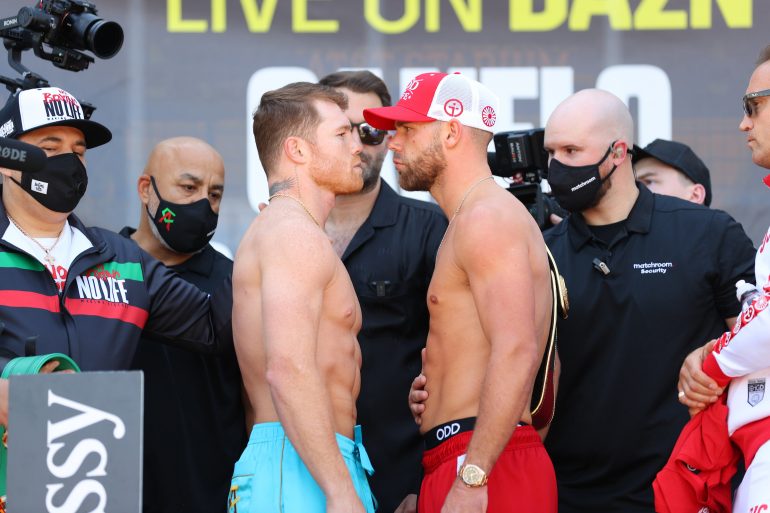 Canelo Alvarez and Billy Joe Saunders face off after weighing in for their May 8 showdown at AT&T Stadium. Photo by Ed Mulholland/Matchroom
07
May
by Dan Rafael

ARLINGTON, Texas – In a welcome scene not seen in boxing since the beginning of the coronavirus pandemic 14 months ago, 5,000 strong turned out for the Canelo Alvarez-Billy Joe Saunders weigh-in on Friday under a blazing sun in front of AT&T Stadium.

There was a sense of normalcy once again on the eve of the biggest fight since the pandemic began, although the weigh-in would have certainly drawn thousands more had there not been a capacity limit. But those who were able to make it saw Alvarez and Saunders step on the scale in apparent supreme condition ahead of their super middleweight world title unification fight on Saturday (DAZN, 8 p.m. ET) that will take place inside the stadium.

The Ring/WBC/WBA world champion Alvarez, 30, who was cheered wildly by the largely Mexican-American crowd and blew kisses to his baby daughter sitting on her mother’s lap in the front row, weighed 167.4 pounds for his second title defense.

WBO titleholder Saunders, 31, who is from England and was jeered just as loudly as Mexico’s Alvarez was cheered, was 167.8 pounds for the third defense of his 168-pound belt.

Alvarez and Saunders engaged in an intense staredown and then went their separate ways until they see each other inside the ring. 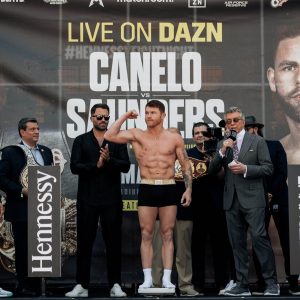 Canelo acknowledges that Saunders has a difficult style but says he’s prepared for anything the Englishman brings on May 8. Photo / @Canelo

“I’m very happy everyone came out. Hopefully, we can give you a good fight,” Alvarez told the crowd. Alvarez acknowledged the tough, technical style Saunders possesses but said he is not concerned.

“He’s a difficult fighter, he’s also a southpaw, but at this level you have to adjust to everything and anything and I am ready for any style,” Alvarez said. “(I’m expecting a) hard fight especially in the beginning rounds.”

Saunders will try to hand the pound-for-pound king his first loss since a decision to Floyd Mayweather in a 2013 junior middleweight world title bout.

“I have the belief, I have the spirit, I have the winning mentality,” Saunders said amid continuous booing. “I’m coming to win. I don’t think Alvarez has faced somebody with as much heart and determination as me. It’s gonna be a good fight. He’s a great champion, but to be honest with you, I’ve come here to take all of these titles and take them by storm.

“I haven’t lost since 2008 (as an amateur), 30-0, and unbeaten, so therefore he has to do something to beat me not the other way around. And as long as I bring my fighting spirit and my brain I’ve got it.”

While Alvarez will be the overwhelming fan favorite on fight night, Saunders said he will not be fazed by what will be a United States indoor boxing record crowd of about 70,000.

Matchroom Boxing promoter Eddie Hearn, who promotes both fighters, said he believed Saunders (30-0, 14 KOs) is the one fighter in the division with a chance to defeat Alvarez (55-1-2, 37 KOs).

“I think this is the best chance that a super middleweight has against Canelo Alvarez,” Hearn said. “Billy Joe Saunders is the toughest test for Canelo — the (technical, southpaw) style, the mentality. The atmosphere in AT&T Stadium would break many people. But it won’t break Billy Joe. But he’s gonna have to box at levels that he’s never boxed at before because he’s never been in with a fighter like Canelo Alvarez.

“Does Billy Joe have the levels? We believe he does. But Canelo Alvarez is very good. You’ve heard from (Alvarez trainer) Eddy Reynoso. They want to knock Billy Joe Saunders out. They don’t want to win this fight on points or cruise through. They want to do damage and punish Billy Joe Saunders for the lack respect they’ve shown. But Billy won’t crumble. He’s going to put in the best performance that he can give. Will it be good enough? We’ll see.”

Here are the weights for the rest of the fights on the card: