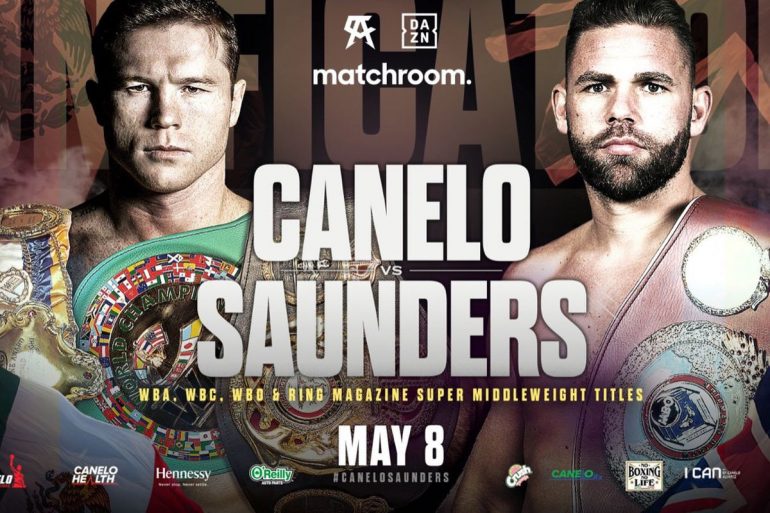 Canelo Alvarez vs. Billy Joe Saunders
04
May
by Dan Rafael

After much tumult in recent days culminating with WBO super middleweight world titlist Billy Joe Saunders threatening to pull out his unification fight with Canelo Alvarez over the size of the boxing ring, the issue was settled on Tuesday, according to Saunders.

“I just want to say the issue is sorted because, as you can see, I tagged [Matchroom Boxing promoter] Eddie Hearn and Canelo in the last video and the ring is not a problem, so thumbs are up,” Saunders said in a 17-second video he posted to his Instagram stories.

He was in bed and gave the thumbs up sign, then added, “Chilling back, watching a few films and, Eddie, get the ring in, mate.”

Saunders is slated to face The Ring and WBA/WBC world champion Alvarez in an effort to further unify the 168-pound division on Saturday (DAZN, 8 p.m. ET) at AT&T Stadium in Arlington, Texas, where a crowd of perhaps 70,000 will be on hand for the most significant fight so far in 2021.

Saunders (30-0, 14 knockouts), 31, of England, however, plunged the promotion into fight week chaos when he and his father Tom Saunders said he would pull out of the fight unless he got his way about the size of the ring in which they will box.

As a fighter who relies on movement, the southpaw Saunders wanted a 24-foot ring, so he could have plenty of space to do his thing while Alvarez (55-1-2, 37 KOs), 30, of Mexico, was looking forward to an 18-foot ring that was slated to be set up. That smaller ring size would have likely been to Alvarez’s advantage because he is a bigger puncher and a more aggressive fighter and he wants Saunders to have as little room to move as possible.

Saunders, who has boxed primarily in 20-foot rings in the United Kingdom, and his father had done various interviews, mainly with British media, claiming he would pull out of the fight if he did not get a ring that was satisfactory to him.

No ring size was specified in the contract, a source with knowledge of the agreement told The Ring, but rather its dimensions were subject to the Texas Department of Licensing and Regulation, which oversees combat sports in the state.

In the TDLR’s rules, ring size standards are specifically addressed. A boxing ring can be no fewer than 16 feet and no more than 24 feet inside the ropes.

According to the source, Saunders was willing to settle for a 22-foot ring with Alvarez’s side offering to fight in a 20-footer for a bout few believed was legitimately in jeopardy over the issue, especially considering that Saunders is in line for the biggest purse of his career by multiple millions.

Whatever size ring on which they agree, Saunders said in his video that the issue has been settled but the sides will likely have to sign off on it officially. Hearn was due to arrive in Arlington on Tuesday night and figures to make it one of his first orders of business.

“I don’t care about the size of the ring,” Alvarez said Tuesday. “I’m just gonna go in there and do my job. It’s not the only excuse he’s had. He’s had plenty of excuses. The fight’s going to happen.

“He has to fight Saturday. The fight is going to happen. That’s not a problem.”

The excuses to which Alvarez was referring are Saunders’ complaints about the judges and whether they will give him a fair shake if the fight goes the distance and his claims that Hearn, who promotes him and Alvarez, is favoring the latter, which Hearn denies.

If Saunders did withdraw from the fight, British super middleweight contender John Ryder (29-5, 16 KOs) would likely get the call to step in as a replacement. Ryder, who has been in training for a June bout versus secondary titlist David Morrell, was already headed to Texas for the fight before the ring situation arose.

“I was always due to go out to Dallas,” Ryder told Sky Sports. “Eddie wanted me to get out there and do a bit of promotion for my up and coming fight in June, so I was always heading out there. But I mean, if he gives me the call, I’ll pack the gum shield and protector. Listen, I’d do it outside the pub on a Saturday night for free, so put a bit of financial motivation behind it, definitely.

“Very small [chance I’ll step in for Saunders]. You don’t come this far in a fight to let it go at the last minute because of a couple of foot. It’s something that should have been settled at the start of negotiations, one of the first things. Sort out your purse; sort out the ring, sort out whether you are walking first or second or whatever. It should have been tied up ages ago. It’s silly that it’s come on fight week, really. Is it just mind games? I don’t think Canelo is the person to do mind games with but I think Billy Joe has got a few tricks up his sleeve.”