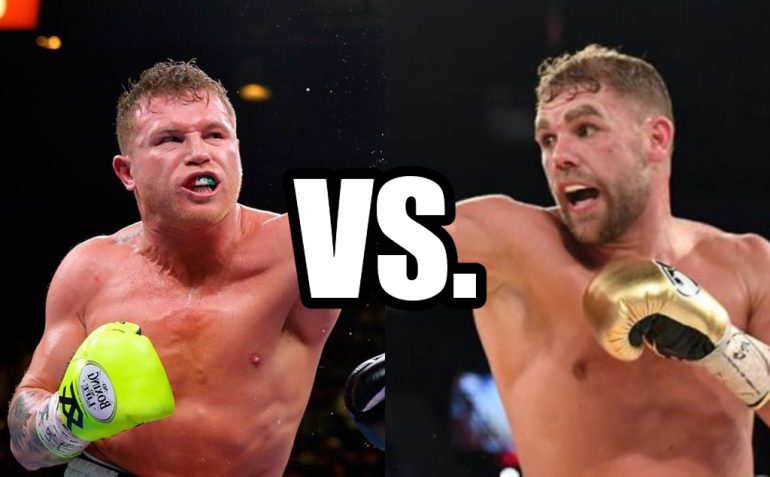 04
May
by Anson Wainwright

Saunders, who is rated No. 4 by The Ring at 168 pounds, won the WBO middleweight title by outhustling Andy Lee (MD 12) and made three defenses. He looked ordinary against Artur Akavov (UD 12) and Willie Munroe Jr. but sensational against David Lemieux (UD 12). The 31-year-old southpaw has since moved to super middleweight, won the vacant WBO title and made two defenses.

Although Canelo (55-1-2, 37 knockouts) has seen every style there is to see, he hasn’t faced a southpaw since he brutally knocked out James Kirkland (KO 3) in May 2015. In the fight prior, he met slick and awkward Erislandy Lara, a lefty who gave the Mexican star all he could handle.

Saunders (30-0, 14 KOs) has been a world champion since he bested Lee in December 2015, but he’s been unable to secure a defining fight. He’s a hot and cold fighter. When presented with a threat, he has been very impressive, but other times he’s gone through the motions and looked awful against unheralded foes. He’s the sort of character that won’t be easily fazed and he will actually enjoy the big stage, but can he box off the backfoot and win a decision against a prime Canelo in Texas? 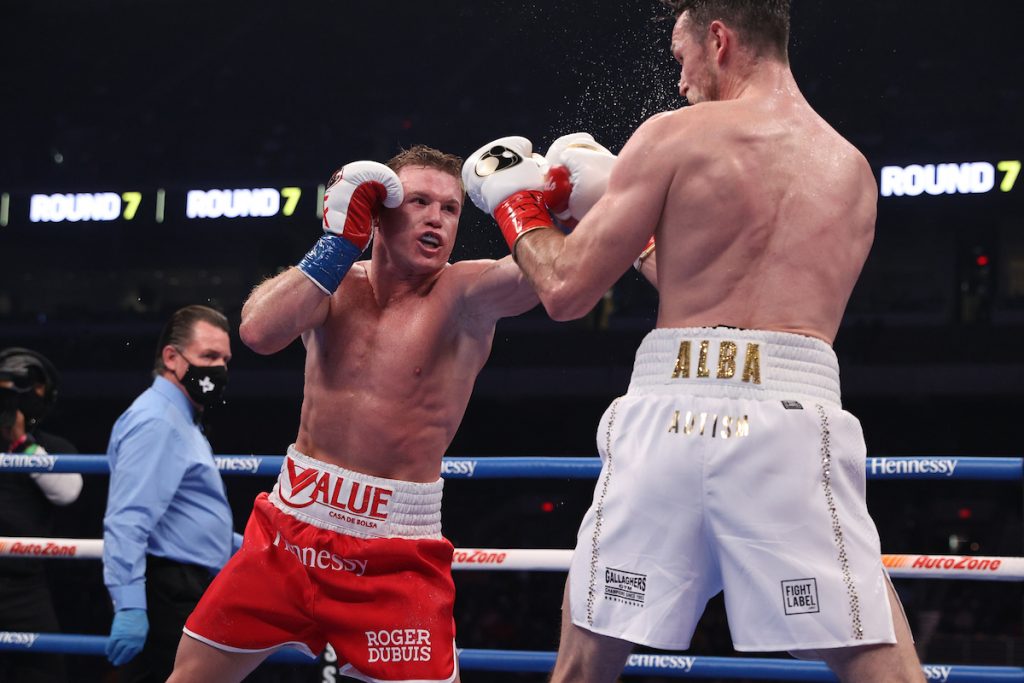 TOM GRAY: CANELO UD
“I loved this fight for Saunders in 2018, when he was coming off the brilliant win over David Lemieux. At his best, Saunders is an extraordinarily gifted and elusive southpaw with quick fists and quick feet, and that style could make Canelo look bad. However, since the Lemieux win, Saunders has mixed with Charles Adamu, Shefat Isufi, Marcelo Esteban Coceres and an inactive Martin Murray. Conversely, Canelo has been in with Gennadiy Golovkin, Daniel Jacobs, Sergey Kovalev and Callum Smith. The difference in quality there is undeniable, and the jump up in weight seems to have suited Canelo better, too. I can see Saunders landing with some real eye-catching stuff, but Canelo will cut the ring down and do more damage. Canelo Alvarez beats Billy Joe Saunders.”

ANSON WAINWRIGHT: CANELO UD
“Canelo has been active and is at his peak right now. Saunders tends to fight to the level of opposition and if not threatened can look ordinary. This fight will bring out the very best in Saunders, who has had to wait for his opportunity to have a superfight for several years. While Saunders’ style is likely to cause problems, I feel, ultimately, that Canelo will press behind a steady jab and vicious body-attack to win a unanimous decision.”

LEE GROVES: CANELO UD
“It has been nearly seven years since Alvarez has faced a scientific southpaw, and an argument can be made that Erislandy Lara deserved better than a split decision loss. Alvarez’s fate here will heavily depend on what he’s learned since fighting Lara, because when Saunders is right, he can be quite the difficult puzzle. Because both have historically been thinking-man’s fighters with moderate work rates, expect this to be a tense and tight contest, especially since Saunders specializes in neutralizing his opponents and exploiting what is given to him. While Saunders is good enough to pull off the upset if all the cards fall his way, I believe Alvarez will prevail because (1) he’s a good defensive fighter himself; (2) he is the far stronger hitter; and (3) Saunders probably doesn’t hit hard enough to keep Alvarez from altering his blueprint. Alvarez’s cerebral pressure and pinpoint power shots will put enough rounds in the bank to walk away a three-belt titleholder.”

MICHAEL WOODS: CANELO PTS
“Saunders will win more minutes of more rounds than any fighter since Gennadiy Golovkin… but lose the fight. This will be a really scientific fight, pure pugilism, that Saunders won’t win. Canelo will take the decision, with his every-so-often power punches proving the difference. Scores will be 7-4-1, or so, for Alvarez.”

RON BORGES: CANELO TKO
“Billy Joe Saunders may give Canelo a bit of an argument for a while but in the end Alvarez is much the better man and his skills will prove it. When you are better than your opponent in every conceivable way, it is difficult to find a way to lose. Canelo will make that clear with a late stoppage.”

MARTY MULCAHEY: CANELO UD
“As boxing superstars go, Saul Alvarez has been nearly flawless the last three years. I thought Callum Smith’s size and jab could cause problems, but instead it was Canelo’s power and heft which ground Smith down. Billy Joe Saunders is a different animal with his movement and the awkward timing or angles he employs finding holes in the opposition. But Canelo is as defensively sturdy as a nuclear bunker, and if Saunders stays close Canelo’s superior physicality will show. Canelo’s steady jab and hooks beats Saunders flashier combinations (which will not occur often enough) or a sound Canelo body shot erases any momentum Saunders builds during a round. Canelo wins by wide unanimous decision in the 9 rounds to 3 region.”

MICHAEL MONTERO: CANELO UD
“Saunders is in the shape of his life; no doubt he understands what he’ll have in front in him on May 8. I believe he’ll pose the toughest challenge Canelo has faced since the Golovkin rematch. However, it won’t be enough to win more than a few rounds. Levels. I like Alvarez 117-111 in a technical fight.”

NORM FRAUENHEIM: CANELO UD
“It’s a tricky fight. Billy Joe Saunders is elusive, left-handed and possesses a good jab. If that sounds familiar, it is. Think Erislandy Lara. The left-handed Cuban baffled and nearly beat Canelo with a similar skill set in 2014. But this is a different Canelo. There aren’t too many tricks he hasn’t seen and solved during the seven years since his split-decision over Lara. It may take a few rounds but expect Canelo to cut off the ring and slow down Saunders with punishing body blows for a thorough, one-sided victory on the scorecards.” 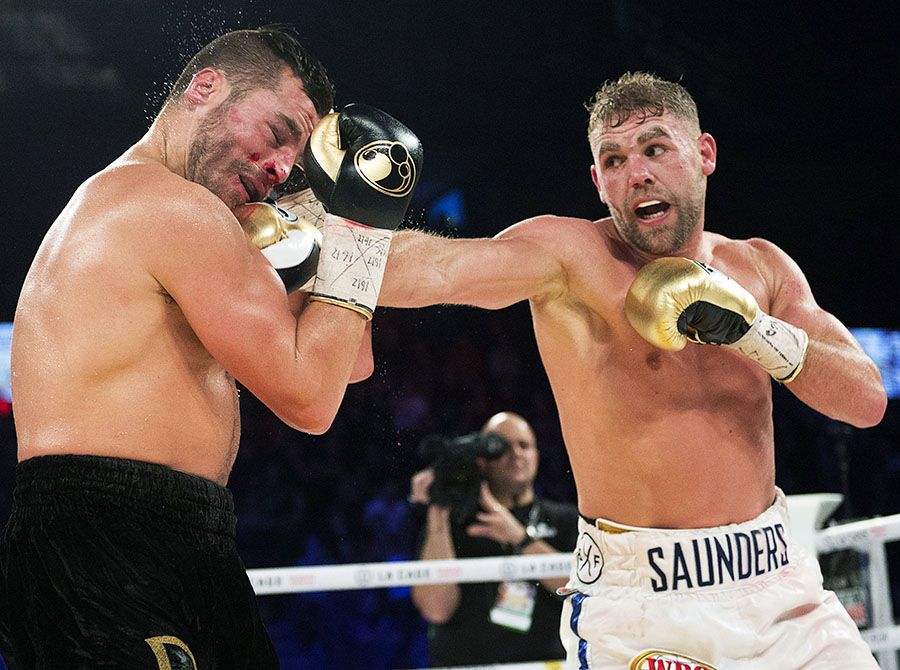 STEVE FARHOOD (TV ANALYST): CANELO TKO
“I can see Saunders’ movement and mobility troubling Canelo for half the fight, but this won’t be the first time Canelo has to cut off the ring. Canelo with a rally over the second half to win by late stoppage.”

DUKE MCKENZIE (FORMER THREE-DIVISION TITLEHOLDER/TV ANALYST): CANELO TKO
“There is no reason for Canelo to think he can’t beat Billy Joe Saunders; he has beaten six British boxers at this level before. Saunders cannot outbox Canelo for 12 rounds and is not a knockout specialist. Canelo wins inside the distance, possibly eight rounds.”

RAUL MARQUEZ (FORMER WORLD TITLEHOLDER/COMMENTATOR): CANELO TKO 10
“Canelo needs to set a busier pace than the usual. Saunders will be moving in and out all night long. Canelo will close the gap in the later rounds and stop Saunders in Round 10.”

ALEX STEEDMAN (COMMENTATOR): CANELO PTS
“I’m fascinated to see what kind of questions Saunders can pose Canelo or if indeed Canelo can dominate BJS in the same way he has other world class fighters of late. Stylistically, this could be the biggest test of Canelo’s career since his loss to Mayweather. Alvarez might have lost to Erislandy Lara had he not gone through the Mayweather matrix previously, so it will be interesting to see how he approaches this technically and tactically. The front foot, suffocating pressure Canelo applies won’t be so easy against a constantly moving target in Saunders. I’m thinking he’ll punch with him, particularly to the body and when exiting exchanges. There may be frustrations, booing perhaps but Canelo has come so far, he should find a way. Canelo by decision.”

MARC RAMSAY (TRAINER): CANELO UD
“I think this fight will be intriguing, not for the show it offers but especially for the complexity of Billy Joe Saunders. It will mostly look like the Canelo vs. Lara fight. Despite a complicated fight I see Alvarez winning a unanimous decision..”

KATHY DUVA (PROMOTER, MAIN EVENTS): CANELO TKO
“This is an easy pick. Saunders is an entertaining fighter, but simply not at Canelo’s level. I expect Canelo to pick Saunders apart and stop him within eight rounds.”

JOLENE MIZZONE (MATCHMAKER, MAIN EVENTS): CANELO
“If Saunders is in shape and taking this fight serious, I think he will give Canelo some problems. The big question: Is Saunders at 100 percent? Even at 100 percent, I think Canelo is just leap years ahead of him, so he will win a unanimous decision or he will stop Saunders with a body shot.”

CAMILLE ESTEPHAN (PROMOTER, EYE OF THE TIGER): CANELO UD
“I think that Canelo wins this one. It will be much harder than people think. When Saunders is motivated, he’s dangerous and very elusive. Canelo will have to dig deep but should win by unanimous decision.”

DAVID LEMIEUX (SUPER MIDDLEWEIGHT CONTENDER): CANELO UD
“It’s a good matchup in terms of style. Canelo is a very complete fighter, but he’s gonna have to be ready for Saunders which I’m sure he will be. He has had some difficulty against slick and moving kind of fighters. Canelo wins unanimous decision.”

RUDY HERNANDEZ (TRAINER): CANELO
“Canelo is the best in his division. No real challenges unless he fought [David] Benavidez, [Dmitry] Bivol or [Artur] Beterbiev and we know he’s not fighting them. They’re picking title fights with guys who are not a huge challenge and making that money. I don’t see this fight as being competitive. Maybe Canelo stops Saunders late or wins a decision.”

KALLE SAUERLAND (PROMOTER, SAUERLAND EVENTS): SAUNDERS PTS
“You never know what happens in camp but Billy Joe looks in the shape and form of his life. I’ve said it before, when he’s in that form he can cause a lot of problems for Canelo. He’s an exceptional boxer when he’s fully fit and focused and he seems to be in a very good mindset and has approached the fight very seriously. I will go with Billy Joe on points.”

JAMEL HERRING (WBO JUNIOR LIGHTWEIGHT TITLEHOLDER): CANELO MD
“I like Billy Joe Saunders, he has the style to frustrate Canelo because if you really look back at Canelo’s fight with Erislandy Lara, Canelo had an issue with the boxer who constantly moved. Saunders didn’t let [David] Lemieux get his feet set and he just outboxed him. At that time Lemieux was crushing everybody. Canelo might have a rough beginning, but if he’s the killer we all know, he’ll eventually start picking up on his ring I.Q. and find a way to neutralize that speed and movement of Billy Joe. I think it’s a good fight, but obviously you still have to lean towards Canelo because of all of the things he’s done. He’s pretty much fought every style out there, bigger guys, guys who people thought were better boxers than him – he found a way to win that. He’s beaten guys in higher weight classes. It’s really hard to go against Canelo. I say it goes to the cards; I don’t see anybody getting knocked out. I’m going to say Canelo majority decision.”