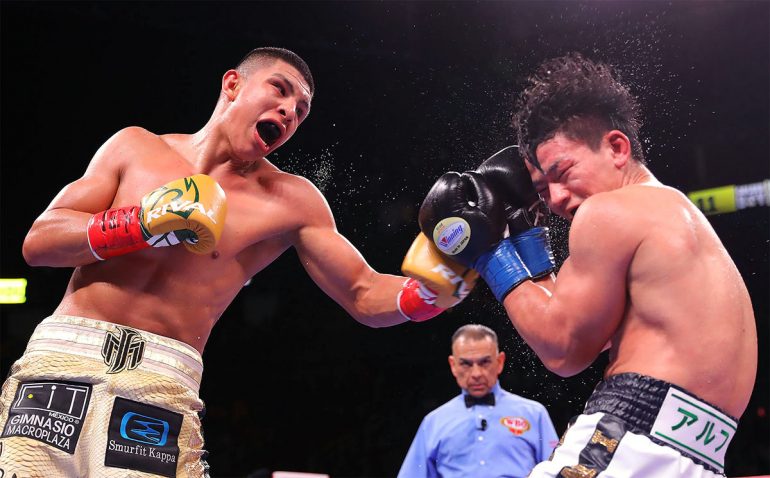 EL PASO, Texas (April 28, 2021) – Jaime Munguia (36-0, 29 KOs) will return to the ring on June 19 against Maciej Sulecki (29-2, 11 KOs) in a 12-round defense of his WBO Intercontinental Middleweight Championship. The fight will take place at The University of Texas at El Paso’s Don Haskins Center and will be streamed live exclusively on DAZN worldwide, excluding Mexico.

The event will be held under strict COVID-19 fan safety protocols and with a reduced event capacity below 40%. For detailed COVID-19 event safety fan protocols, click here or visit http://www.utepspecialevents.com.

“Although there have been several changes, we are happy because things are back on track for Jaime Munguia’s return on June 19,” said Oscar De La Hoya, Chairman and CEO of Golden Boy. “I’m confident that he will deliver a tremendous performance against Maciej Sulecki and show everyone why he deserves an opportunity to become a two-division world champion. At the same time, we’re very excited to have Bektemir Melikuziev face a real tough test against Gabriel Rosado. If he can look impressive against Rosado, then a world title shot will be just around the corner.”

Munguia is a 24-year-old former world champion from Tijuana, Mexico who leaped onto to the highest levels of the super welterweight division by knocking out Sadam “World Kid” Ali to capture the WBO title. Munguia then defended his title against Liam “Beefy” Smith, Brandon “Bad Boy” Cook, Takeshi Inoue, Dennis Hogan and Patrick Allotey. After five defenses at junior middleweight, Munguia moved up to 160 pounds to capture the WBO Intercontinental Middleweight Title against Gary “Spike” O’Sullivan, which he defended against Tureano Johnson. Despite many changes to his upcoming fight, Munguia will look to make his case for a world title opportunity at 160 pounds.

“I feel very excited to be returning on June 19,” said Jaime Munguia. “I know it will be a tremendous fight against Maciej Sulecki. I think he is a great fighter, and I will make sure to deliver a great fight to all the fans in El Paso, Texas and to everyone who will be watching from home. Thank you very much for your support.”

Sulecki is a Polish contender who has scored knockout victories against Hugo “The Boss” Centeno Jr. and countryman Grzegorz Proksa. The 31-year-old puncher has only suffered two defeats, which were against Daniel “The Miracle Man” Jacobs and Demetrius “Boo Boo” Andrade. Though pulling out of the initial fight date due to an injury, Sulecki is ready to return to the ring on June 19.

“There have been many changes, but I am happy that things will take place as planned,” said Maciej Sulecki. “I know that a victory against Jaime Munguia will put me on the path to challenge for a world title. That’s why securing this fight was very important to me. I feel great, and I am totally ready to show the world that I can compete against the best in the division.”

“I can’t wait for June 19,” said Leon Margules, President of Warrior’s Boxing. “Although the original date has been changed, the result will remain the same. Maciej Sulecki will dominate Jaime Munguia. I have no doubt.”

Additional undercard fights will be streamed live via Facebook Watch.

Topping the undercard presentation is an exciting battle between two Golden Boy welterweights as Raul Curiel (9-0, 7 KOs) of Tampico, Mexico and Ferdinand Keroyban (14-1, 9 KOs) of North Hollywood, California meet in a 10-round fight.

Exciting southpaw contender Alexis “Lex” Rocha (16-1, 10 KOs) of Santa Ana, California will look to bounce back from his first defeat in a 10-round 147-pound battle against James Bacon (26-4, 17 KOs) of Cebu, Philippines.

Fiodor Czerkaszyn (17-0, 11 KOs) of Warsaw, Poland will participate in a 10-round middleweight fight.

Manuel Flores (9-0, 6 KOs) of Coachella, California will open the night in a six-round super bantamweight clash.

Opponents for Czerkaszyn and Flores will be announced shortly.