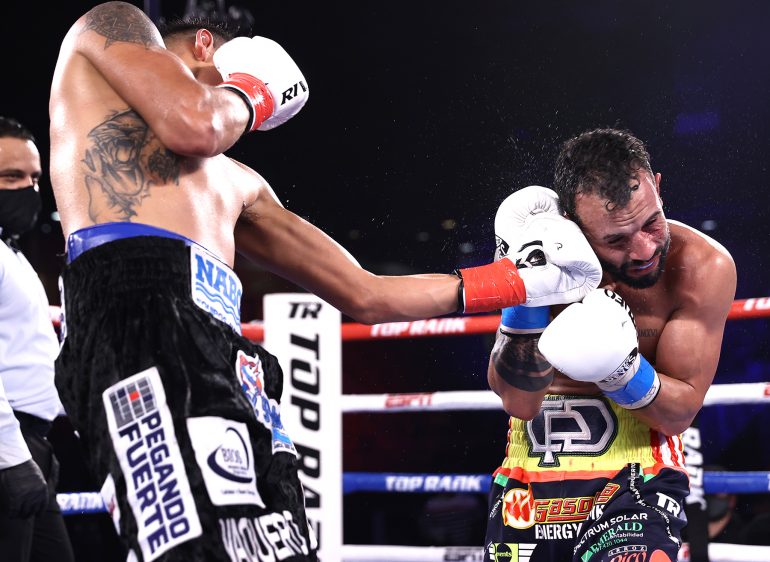 Emanuel Navarrete wanted a memorable battle that would be worthy of the revered Mexico versus Puerto Rico boxing rivalry and he found a willing partner in Christopher “Pitufo” Diaz on Saturday night.

Although one-sided, they turned in an action-packed battle in which Navarrete scored four knockdowns and stopped Diaz to retain the WBO featherweight world title when Diaz’s trainer, Nelson Rodriguez, threw in the towel in the waning seconds of the 12th round of the Top Rank Boxing on ESPN main event at Silver Spurs Arena in Kissimmee, Florida.

Mexico’s Navarrete had no problem going to the Orlando suburb of Kissimmee, a Puerto Rican hotbed on the outskirts of Puerto Rican Diaz’s adopted hometown, where a socially distanced sellout crowd of 3,262 cheered wildly for Diaz.

But Navarrete put the pedal to the metal in a wildly fast-paced slugfest to eventually overwhelm Diaz and his enormous heart.

“I think we did put on a worthy performance because I knew ‘Pitufo’ was tough,” Navarrete said through a translator about whether the fight lived up to the pantheon of memorable Mexico-Puerto Rio rivalry fights. “I knew he was strong and I knew he could hit hard, but he surpassed all my expectations. He brought out all the best in me and so I’ve got a lot of respect for Christopher ‘Pitufo’ Diaz.”

Navarrete (34-1, 29 KOs), who made five junior featherweight title defenses in nine months before moving up in weight and winning the vacant WBO title by decision over Ruben Villa in October, dropped Diaz (26-3, 16 KOs) in the fourth rounds, twice in the seventh and again in the 12th. He led 107-98 on all three scorecards at the time of the stoppage, but there was drama and tons of action getting to that point.

“I’m very disappointed. I wanted to win. It’s a title shot, but next time,” Diaz said. “He’s a great fu—– fighter. He hit hard. We went to war. I made my best fight. I was in shape. Everything was good. He’s got great heart. He got balls like me also. We went to war. We came here to make a show.”

This 12th round was just 🇲🇽 vs. 🇵🇷 at its finest.

After two close rounds to start the fight, with Diaz trying to box and move, Navarrete got his offense going in the third round, when he lunged forward and landed two long left uppercuts as he threw punches from all angles.

He broke through in the fourth round when he feinted with a right hand and followed with a leaping left uppercut that split Diaz’s guard and dropped him hard to his rear end with about 35 seconds left.

Diaz tried to slow Navarrete down by targeting his body and he had a very good sixth round hurting Navarrete to the body and landing multiple lefts to the head.

Diaz had been warned by referee Samuel Burgos earlier in the fight for hitting Navarrete behind the back, so when he landed another kidney shot in the seventh round, Burgos docked him one point. Diaz’s nose was bloody and his right eye was swelling by the end of the fireworks filled seventh.

Navarrete continued to plow ahead and had a huge eighth round, dropping Diaz twice. First, with about a minute left, he sent Diaz to his rear end from a combination that included a booming uppercut. Diaz got to his feet at eight but moments later went down again under intense pressure. Diaz got off his knees at eight, but he looked dejected and his face was a bloody mess.

Navarrete, 26, continued to dish out punishment but Diaz never stopped trying to press ahead and land a big shot that he hoped could change the fight.

Diaz, 26, who also lost a world title fight at junior lightweight when he was outpointed by Masayuki Ito for the vacant WBO title in 2018, also in Kissimmee, was still giving a Herculean effort in the 12th round and landed a hard left hook as he went for a knockout.

A punch from Diaz knocked out Navarrete’s mouthpiece and after a brief timeout to replace it Navarrete hammered Diaz with a series of right hands. Diaz was very wobbly along the ropes and nearly went down as Navarrete continued an assault of more than a dozen unanswered shots before finally flooring him for the fourth time. Diaz beat the count, but Rodriguez threw in the towel and Burgos stopped the fight at 2 minute, 49 seconds.

“I’m not a weak fighter. I always bring my heart with me,” Diaz said about how he was able to keep getting up. “I came here to fight. I said I want to box but that guy, he’s a problem. We come here to fight too. He caught me. My coach loves me like a son and he stopped the fight.

“I got to take some time off, enjoy my kids. Family is the most important part here. I’m disappointed but it’s the sport of boxing. So many fighters lost two, three, four title fights. I may come down to 122.”

Navarrete said he was happy that Rodriguez threw in the towel

“I saw how hurt he was and I was concerned for him and I’m glad that they threw in the towel because I looked at him and I was very thankful he wasn’t severely hurt,” Navarrete said. “We were able to talk to one another and he was responsive and everything was OK. And that’s what this sport is about – caring for your fellow competitor. So, thank goodness, that he is OK.”

He certainly earned Navarrete’s respect by showing such a big heart.

“I was really impressed by ‘Pitufo’ because every time I hurt him, every time I dropped him, he came back stronger. He was a beast in there because he kept coming at me. He kept getting better even though I kept hurting him and as the fight progressed you’d expect him to get weaker but he kept getting stronger. I just couldn’t understand it. So I have the utmost respect for Christopher ‘Pitufo’ Diaz and what he did tonight.”

Navarrete could not land a marquee or unification fight at junior featherweight and hopes that is not going to be more of the same at featherweight. If it he said he would move up to junior lightweight.

“The first thing I have to do is take a rest,” he said. “This was a fight that took a lot out of me, so I think I’ve earned that rest. There are a lot of good fighters at 126 but none of them really want to fight me, so in the end if nobody wants to fight me at 126 I need to analyze what the landscape is at 130 pounds and look for a good fight there.

“At 126 I think there are still good fights there. Leo Santa Cruz still holds a belt even if he moved up. I’d like to fight him. (Titlist) Gary Russell Jr. is another name in this weight class. I hope they’ll want to step up and fight me but in the end if those options aren’t available to me I can go to 130. I think I’ve earned the right to call out the big fights.”