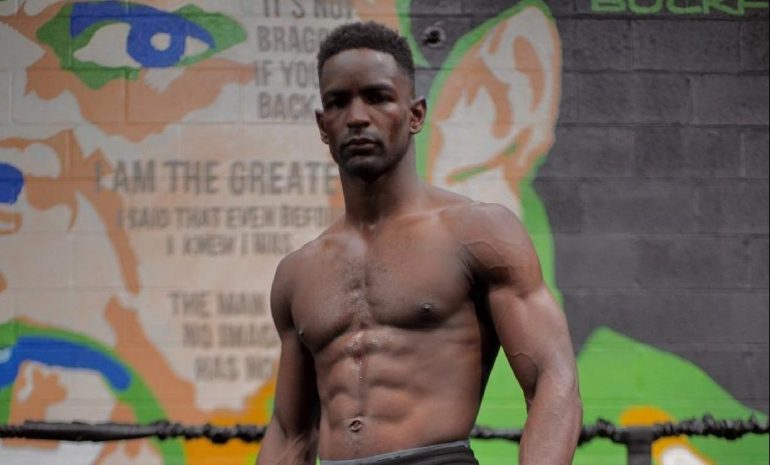 Victor Williams is a Dartmouth grad who's entering the brutal world of pro boxing for the first time Saturday night (Photo by Chris Lawrence).
23
Apr
by Joseph Santoliquito

The response to the resume is all the same. Raised eyebrows, followed by knowing nods and monotone, one-word answers usually come next, like “Dartmouth, Dartmouth,” they always say.

Victor Williams, 27, found out employers tend to take increased notice to Ivy League graduates. The 2016 Dartmouth grad left the leafy New Hampshire campus with a degree in Bachelor of Arts and Engineering Sciences.

In time, Williams is hoping the boxing world takes notice, too, after the 5-foot-9 junior middleweight from Washington, D.C. makes his pro debut at Philadelphia’s 2300 Arena under the Jeter Promotions banner on Saturday in a four-rounder against Leonidas Fowlkes (2-1).

Chiseled like a Greek sculpture, Williams was a four-year starting wide receiver for Dartmouth’s football team. He got some pro looks and tepid interest from the Canadian Football League. But being 5-9 and weighing around 170 pounds won’t raise too many eyebrows in the pro football world, unless you possess world-class scorching speed like Heisman Trophy winner DeVonta Smith, the 6-foot, 166-pound wide receiver out of Alabama.

He finished second-team all-Ivy League his senior year. He should have been first-team.

It didn’t hit Williams how much of an impact an Ivy League degree means until he entered the real world. Schools like that are in a bubble, primarily elitist schools for privileged elites with money. Williams was the furthest from that. He came from rural Muskogee, Oklahoma, population 40,000—not exactly a teeming area of potential Dartmouth scholars.

“I didn’t really thing about it, I just went about my business and stayed busy,” Williams said. “When you’re not among the elite, you stay to your day-today and about your busy life. It’s when I graduated and got into the real world it was then, ‘Oh wow, you went to Dartmouth.’ Then I began feeling the impact of going to an Ivy League school, and graduating from an Ivy League institution.”

A business owner and fulltime fitness trainer, Williams chalked up a 15-2 amateur record and has sparred with some qualified pros, like Antuanne Russell and Keeshawn Williams along with other pros from the Uptown Boxing Gym in Baltimore, Maryland.

But the question he often gets asked now is why boxing? Why would someone with an Ivy League degree want to fight?

“After I graduated and moved down to D.C., one of my co-workers who I played at Dartmouth with knew my first sport was karate, and he told me about a local UFC gym,” said Williams, who possesses a black belt in karate. “We checked it out and I took a general boxing and conditioning class. The instructor came up to me afterwards and asked me if I had boxed before. This was in the fall of 2016.

“He got me in touch with the technical boxing coach (Terrance Wood), who is still my boxing coach today. That’s how it started.”

Over the next four years, Williams fought as an amateur.

“I was doing all of this training and it came to a point where it was time to go pro,” Williams said. “I’ve been sparring high-level guys and I did well. It’s just like in school, you do all of this studying and it’s time to take a test.”

Williams’ father was very much in favor of this new endeavor. His mother, however, had her reservations.

“When I played at Dartmouth, I weighed 170, and was the smallest guy on the field at all times,” Williams said. “When I told my mother I was boxing, she was not to crazy about it. Her response was, ‘Oh, ok,’ but she wasn’t too excited when I played football in high school. She eventually came around. My father was excited (about Victor boxing). He boxed in the military. He talked my head off for an hour when I told him.”

If boxing doesn’t work out for Williams, he certainly has a great Plan B awaiting him.