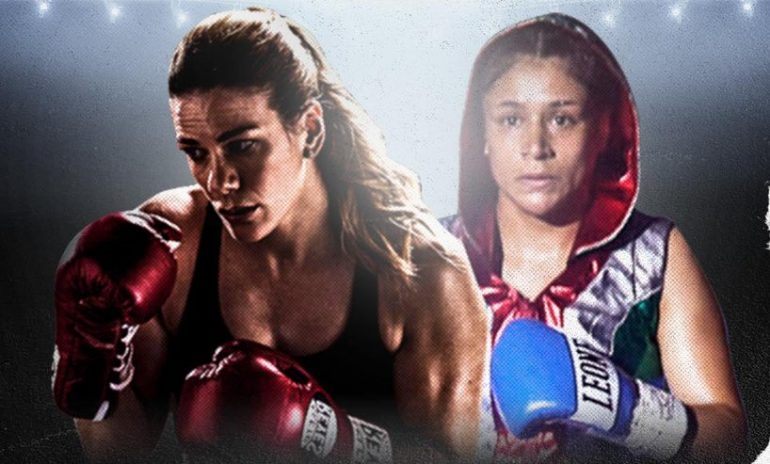 “I’m sorry; I can’t control my emotions,” she said as she cried during the post-fight interview. “I told you Mexicans are warriors. Every single round of this fight, I thought of my father. I couldn’t come this far and disappoint him. Now we have the belt.”

Although Mrdjenovich (41-11-2, 19 KOs) was the taller, longer, more experienced fighter, Cruz controlled the action throughout the Ring City USA main event. The Canadian, who turned pro 13 years before her younger opponent, looked a half step behind.

Accidental headbutts played a major role in this fight and it didn’t take long for both women to suffer cuts. Mrdjenovich got the worst of them with a nasty gash over her right eye while Hernandez was cut on the top of her head.

By the middle rounds, Mrdjenovich’s face was a bloody mess.

Toward the end of the sixth, referee Benjy Esteves asked the 38-year-old veteran if she wanted to continue. Mrdjenovich said yes but there was a slight hesitation in her response. It felt like the end was near for the long-reigning titleholder.

The following round, after another clash of heads, with Mrdjenovich bleeding profusely, Esteves decided to stop the fight. The judges were instructed to score the partial seventh round. All three saw the fight 70-63 for Cruz, who performed well in the biggest fight of her career.

Unified featherweight titleholder Amanda Serrano, who recently defended her titles in a Ring City USA headliner, congratulated Cruz and said she would love to unify with her next.

In the co-main, Juan Pablo Romero improved to 14-0 (9 KOs) with a hard-fought unanimous decision victory over Deiner Berrio in a welterweight fight. Romero controlled the action for the most part. However Berrio (22-3-1, 13 KOs), who was born in Colombia but now fights out of Los Angeles, never stopped coming forward. He fought aggressively but couldn’t land consistently. After the 10-round distance, all three judges scored the bout 98-92 for Romero, who was fighting out of native Mexico for the first time as a pro.

The swing bout was a very entertaining one. Angel Ruiz (17-1, 12 KOs), born in Mexico and now fighting out of East Los Angeles, had to dig deep to score a unanimous decision win over Bobirzhan Mominov in an eight-round welterweight contest. In the fifth round, the Kazakhstan native, who also fights out of California, landed a hard shot well below the belt line. Ruiz immediately dropped to the canvas. Referee Charlie Fitch correctly called it a low blow and allowed Ruiz, who was clearly hurt, time to recover. Working with trainer Manny Robles for the first time, Ruiz gathered himself and dropped Mominov with a solid left hook just moments later. Ruiz would put him down once more in the seventh for good measure. Mominov lost for the first time as a pro, dropping to 12-1 (8 KOs).

Before the main card on NBC Sports Network, there were a handful of undercard fights, both amateur and pro, streamed on Twitch. Below are the results of the professional bouts.

Christian Mbilli improved to 18-0 (17 KOs) with a fifth round TKO win over Jesus Antonio Gutierrez in a super middleweight bout. Born in Cameroon, Mbilli moved to France as a child and represented his adopted homeland in the 2016 Olympics. He also fought in the World Series of Boxing. All of that experience served him well against Gutierrez, of Mexico, who fell to 27-5-2 (14 KOs).

Los Angeles featherweight prospect Jalan Walker faced adversity for the first time in his young career, settling for a draw against Angel Antonio Contreras in a six-rounder. Walker (8-0-1, 7 KOs), a southpaw, had dominated his opposition coming in but was tested this evening by the Mexican. Contreras (11-4-2, 7 KOs) was able to connect with several flush power punches throughout the fight.

Tampa, Florida native Daniel Bailey wasted no time, needing only 30 seconds to get rid of Luis Alvarado in a junior lightweight bout. Bailey improved to 4-0 (3 KOs) with the win, barely breaking a sweat. Alvarado (1-3) dropped his third straight.