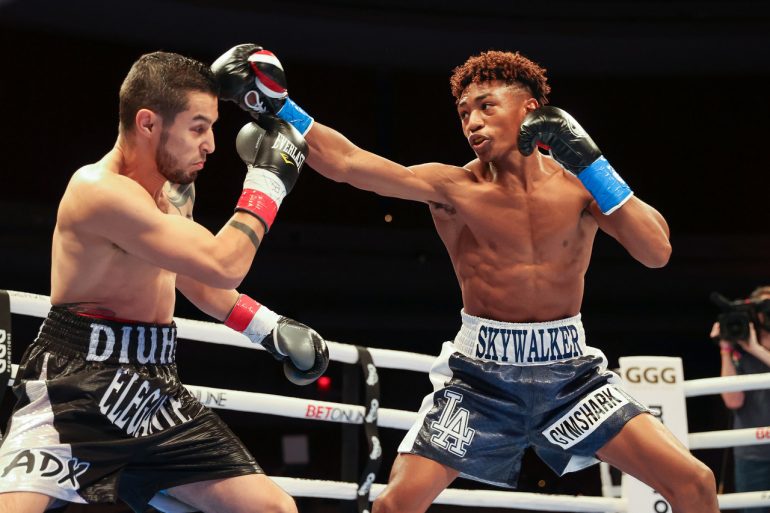 Not many know Jalen Walker—not yet at least. But a few more may become acquainted with him after Thursday, when “Sky Walker,” a budding 19-year-old southpaw featherweight who is 8-0, with 7 knockouts, takes on 26-year-old Angel Contreras (11-4-1, 7 KOs) as part of the Ring City USA show (NBC Sports Network, 9 p.m. ET/6 p.m. PT), appearing on the Twitch portion.

Walker is willing to be patient, because he knows serious boxing people will have a vigilant eye on everything he does.

Walker is not yet signed with a promoter, though many are interested.

He’s fighting for more than just winning. He knows he has to look good doing it.

He may have the perfect foil in six rounds with a tough opponent like Contreras.

“I know (Contreras) is coming to fight, he’s a tough guy and there is no way I’m looking past him,” Walker said. “My seventh pro fight, against Diuhl Olguin, was the toughest fight of my career so far and it’s the first time I did go six rounds.

“Olguin wound up knocking out David Navarro, who was at the Olympic Trials and was a very good amateur. It proves that you can’t sleep on any of these guys. I hurt Olguin a few times, but he’s a tough guy who could take a punch.”

Walker said being streamed live on Twitch adds extra incentive. He’s looking to open more doors and winning convincingly could do that.

“It’s a big step up for me and a big opportunity,” Walker said. “At one point in his career, (Contreras) was highly thought of and undefeated. I learned with (Olguin) that you never underestimate anyone’s record. He was 14-14 when I fought him. I’ll be better than my last fight, but I will have to bring my A-game.

“I have the experience of going six rounds once. But when you see these guys, young guys like me, getting upset by these older, tough guys, it does raise your antennas. (Contreras) has only been stopped once, though when I saw Angel Barrientes get knocked out, I was like, ‘Oh s—t! I better watch out!’ Just because you’re good coming up doesn’t mean that you’re going to automatically win.”

Walker said his diligence to detail will be even greater as he progresses. He makes sure he spars older fighters in the gym, because it gives him new looks.

What could fans expect about Walker this time that they have not seen before?

“I’ll get to showcase my skills and don’t have to worry about knocking (Contreras) out, because when you’re in there with certain types of competition, you have to get them out quick,” Walker said. “With this guy, I can show my boxing skills a little more. It is scheduled for six, though I don’t expect it to go six.

“This will be new for me. More people will get to see me than saw me before. I know I have to look good. I also know I need to be patient and work to win, not take dumb chances.”