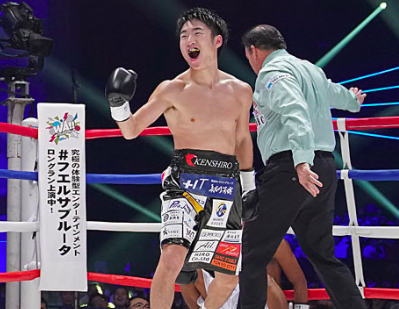 Teraji, who is rated No. 1 by The Ring at 108 pounds, behind champion Hiroto Kyoguchi, is pleased to be fighting again after 16-months of inactivity.

“I am happy and looking forward to the showdown that will take place,” Teraji (17-0, 10 knockouts) told The Ring through Hank Hakoda. “I am excited to fight in the ring more than ever. It has been a long time since my last fight. I do not feel that hiatus will be an issue for the next contest at all. I am in shape and I am just ready to fight.”

The 29-year-old intends to fight his fight and let Hisada worry about him.

“My ideal fight scenario would be that I take advantage of my solid footwork as usual, without getting punched, but apply my jab and bring the fight to my own pace,” he explained. “I will basically focus on my own performance, rather than on what Hisada brings in the bout.

“I will just be careful not to take an unnecessary big punch from him. I need to lower my center of gravity, to maintain stable moves regardless of any situation, by shifting my weight down especially when stepping backwards.”

Teraji had been due to face his compatriot on December 19. However, the fight was put on ice when it was revealed Teraji was involved in a drunken fracas in his native Japan. The Japanese Boxing Commission (JBC) subsequently suspended his license for three months.

“I have regrettably made a lot of people disappointed due to the incident that I caused, including my fans and even those who have supported me unconditionally,” said the repentant champion. “All I can do now is to give back to them and continue to display my boxing in the best possible manner.

“I am highly motivated to showcase my strength and score a convincing victory, where people can see how much I try to bounce back and show the positive growth as a fighter.”

To prepare for Hisada, Teraji has trained alongside Kenta Kato at the Misako gym in Tokyo. During camp he has enjoyed regular sparring sessions with the reigning OPBF junior flyweight titlist Kenichi Horikawa and unbeaten Toshiki Kawamitsu.

Teraji, who has held the WBC title since May 2017, is focused on impressing against Hisada but has several long-term goals. 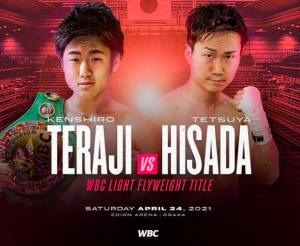 “I will demonstrate an overwhelming performance,” he said confidently. “I want global boxing fans to witness my next fight to see how much stronger I have become. If I get a fight offer from overseas, I would definitely consider it, which may happen for my unification showdown in not-too-distant future.

“My top priority out of my options is to overwrite legendary Yoko Gushiken’s Japanese record of 13 consecutive world title defenses. En route to the new record, I want to earn all the belts from lineal champs in my category. My trainer and I share the same opinion that [IBF 108-pound] titleholder Felix Alvarado deserves the highest credit of all. However, I am interested in fighting all champs, including my compatriot [The Ring and WBA titlist] Hiroto Kyoguchi at some point in my career. I want to fight all of them who all have belts, but I will fight any opposition based on my team’s decision.”

Teraji’s father, Hisashi, who is a former OPBF light heavyweight titlist, works closely with his son and hopes he is able to return to action with a definitive performance after his prior indigestions.

“I expect Kenshiro not only to earn back trust of fans and supporters but also to make it even bigger,” he said. “Hisada is a veteran with profound ring experiences, and I am sure he is so determined in this title attempt.

“Kenshiro will try to stay out of range cutting off the ring with his footwork to find a home for his counterpunches, while a driven and durable Hisada may want to stay in close contact and engage. Considering their styles, it is highly likely to be an action-packed fight.

“Hopefully fans will enjoy a subtle technical match-up. Although it may not be easy for my son to land his punches to knock him out, he has a good chance to score a clear win. I sincerely hope everyone accepts Kenshiro warmly again by watching his performance in this coming showdown as he will never let you down.”

Hisada (34-10-2, 20 KOs) has been a professional since 2003. He was a journeyman for over a decade but won a Japanese national title in 2016. Reeling off six defenses, he turned back the challenges of amongst others, Horikawa (UD 10) and Atsushi Kakutani (TKO 8). Hisada, 36, gave Kyoguchi all he could handle in a Ring and WBA title fight in October 2019, which he eventually lost by decision.