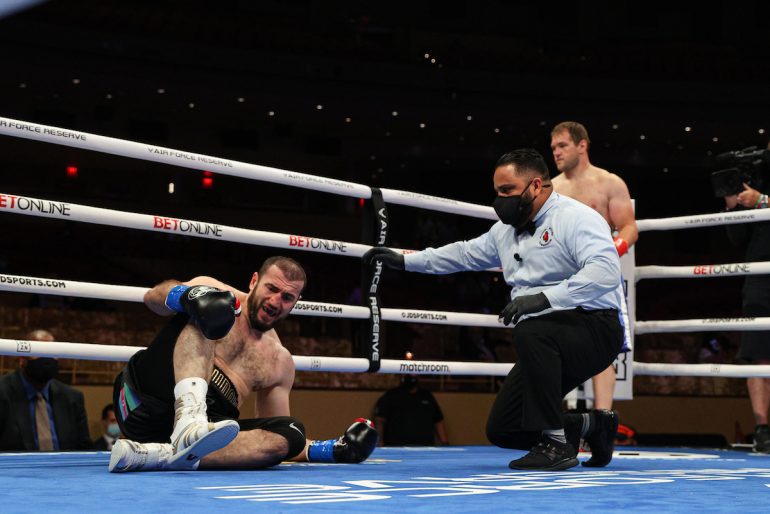 Mahammadrasul Majidov injured his right ankle after being dropped by Andrey Fedosov. Photo by Ed Mulholland/Matchroom.
17
Apr
by Ryan Songalia

HOLLYWOOD, Fla. — Andrey Fedosov was essentially retired, having not fought since 2018, but the 35-year-old Russian big man showed he still carried a big punch.

Fedosov dropped and stopped three-time World Amateur champion Mahammadrasul Majidov twice in a first round win on Saturday at the Seminole Hard Rock Hotel and Casino in Hollywood, Florida.

The first knockdown came as Fedosov (32-3, 26 knockouts) stepped in with a 1-2 combination, causing all of Majidov’s 232 pounds to come crashing down on his right foot, breaking his ankle. Majidov (3-1, 3 KOs) wasn’t out cold, but his ankle injury left him a stationary target for Fedosov, who sent Majidov back down, this time for the count. The official time was 1:24.

The result comes as a shocker as the 34-year-old Majidov, a 2012 Olympic bronze medalist from Azerbaijan who owns an amateur win over Anthony Joshua, appeared on the fast track to a big fight. Majidov was removed from the ring on a stretcher, and had his injury confirmed shortly after leaving the arena.

Fedosov stops Majidov in the first round for a huge upset victory! 😳 pic.twitter.com/LVCt9H8BDg

Fedosov has now won eight straight since his only stoppage defeat in 2013 against Bryant Jennings.

The result was just one of several upsets on the Demetrius Andrade-Liam Williams undercard, which aired on DAZN.

Jorge David Castaneda (14-1, 11 KOs) registered his biggest win as a pro so far, outfighting previously unbeaten prospect Otha Jones III (5-1-1, 2 KOs) to an eight round majority decision win. One judge had it even at 76-76, while the other two scored it 77-75 and 76-75 in favor of the Laredo, Texas native Castaneda. 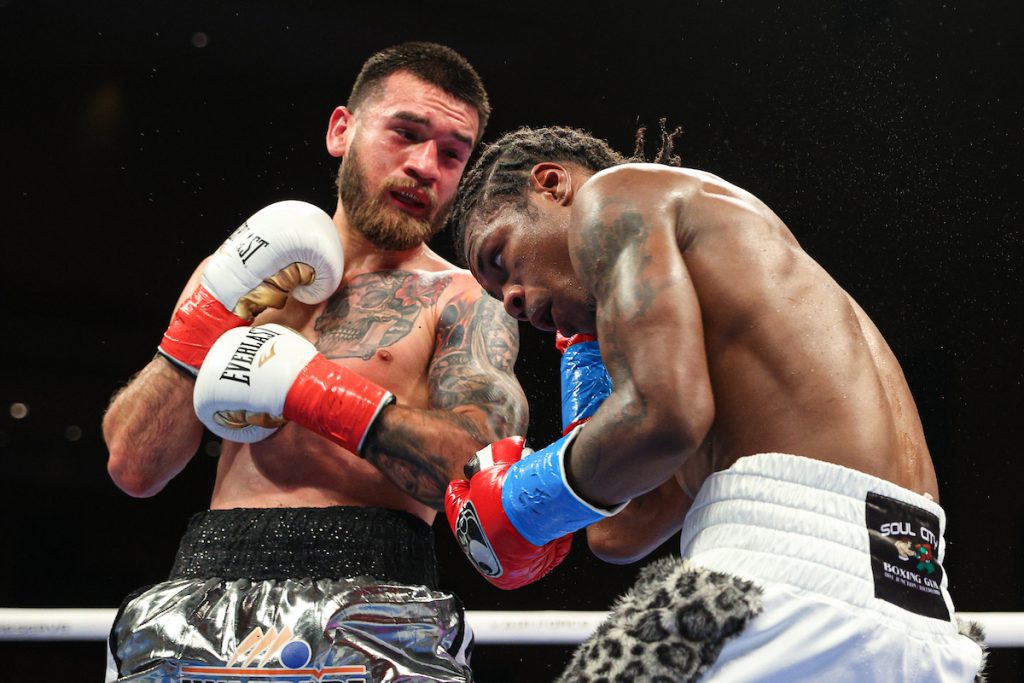 Jones III, a former amateur standout from Toledo, Ohio, had controlled the first two rounds with his athleticism, but Castaneda found his range in the third, rocking Jones repeatedly with right hands from distance. Jones looked like he might not make it out of the round, but he found his legs again in the fourth, walking Castaneda into counter punches that brought him back into the bout.

Castaneda found success again in the sixth and landed enough to daze Jones at points later in the fight. The win is the fifth straight for Castaneda since his sixth round stoppage loss to Randy Moreno Ochoa in 2018.

Movladdin “Arthur” Biyarslanov (8-0, 6 KOs) handed another unbeaten fighter his first defeat when he outpointed Israel Mercado (9-1, 7 KOs) in an eight round lightweight bout. Scores were 76-76, 78-74, 77-75, with the Canada-based Chechen fighter using his southpaw counterpunching to offset the aggression of the Pomona, California based Mercado.

Kicking off the action, Aaron Aponte moved to 3-0 ( KOs) with a clinical victory over Javier Martinez (4-8, 3 KOs), with all judges scoring the fight 40-36 in favor of the 19-year-old from Hialeah, Florida.

Aponte used his significant height and reach advantage to paint Martinez with jabs, forcing Martinez to lunge in, where he’d be met with counter uppercuts. By the third, lead right hands landed with regularity, one of which stunned Martinez towards the end of the third.

Aponte, a Peter Khan-managed junior welterweight, turned pro last October after an amateur career that brought a reported record of 98-18.