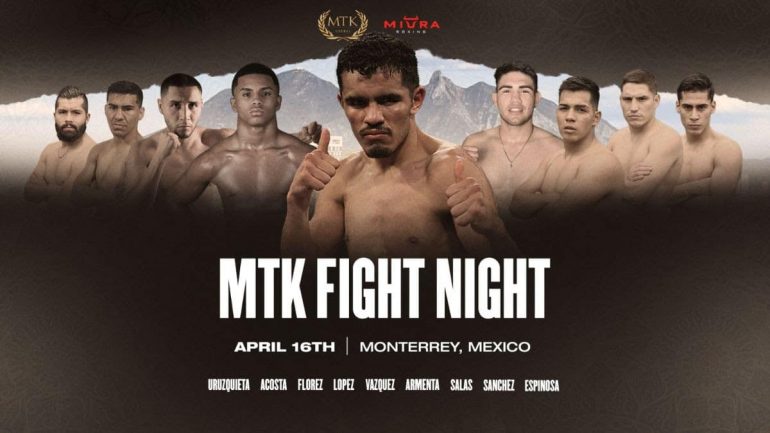 Miguel Vazquez proved that he can still pack a punch.

The former 135-pound titlist dropped Isai Hernandez in the fifth round en route to a seventh round knockout in an utter mismatch on Friday night. Scheduled for 10 rounds, Vazquez vs. Hernandez headlined “MTK Fight Night,” at the Verità Social Venue in Monterrey, Mexico.

The victory marked Vazquez’s first since December 2019, when he stopped Jesus Miguel Velasco inside five rounds in a bout that also took place in Mexico.

The fight was settled from the onset. Vazquez buckled Hernandez just before the curtain closed on the first round with a crisp right hand.

Hernandez, who came into the fight on a four-bout winning streak against inferior opposition, spent much of the second round complaining of rabbit punches. Meanwhile Vazquez kept punching and backed up his outclassed opponent with solid combinations.

Vazquez, who was coming off a controversial 12-round split decision loss to Lewis Ritson last October, in England, had his way with Hernandez in Round 4 with a combination of superior defense and offense.

The 26-year-old Hernandez (10-2-1, 7 KOs), who is eight years Vazquez’s senior, missed terribly throughout the frame, struggling to deal with his head movement. At the end of the round, he stumbled into the ropes after Vazquez circled around him.

Hernandez continued to struggle in the fifth round. Vazquez connected with a left hand to the body that sent him to the canvas for the first time in the fight. Moments later, Hernandez was floored again but was saved by the bell.

Vazquez (43-10, 17 KOs), 34, who won the IBF lightweight title in January 2012 with a unanimous decision victory over Ammeth Diaz, going on to defend the title three times before losing the belt to Mickey Bey in September 2014, battered Hernandez in Round 6 with a series of stiff lefts and rights.

But the battle was briefly stopped as Hernandez, who is actually mute, repeatedly turned his back and complained to the referee of rabbit punches. He was then warned for his actions before the fight resumed.

However it all came to an end just 43 seconds into the seventh round as Vazquez teed off on Hernandez, backing him into the ropes and rocking him with an unanswered 15-punch onslaught before the referee mercifully waved off the fight.

Vazquez won for just the third time in his last six appearances in the ring. His professional career kicked off in January 2006 with a split decision loss to eventual superstar Canelo Alvarez. The pair fought again two years later in a card that featured all seven Alvarez brothers. Vazquez was outpointed over 10 rounds.

In the chief support bout, Ariel Perez (6-0, 5 KOs) scored a seventh round stoppage of Brandon Romero (11-2-1, 6 KOs) in a scheduled 10-round junior featherweight affair.