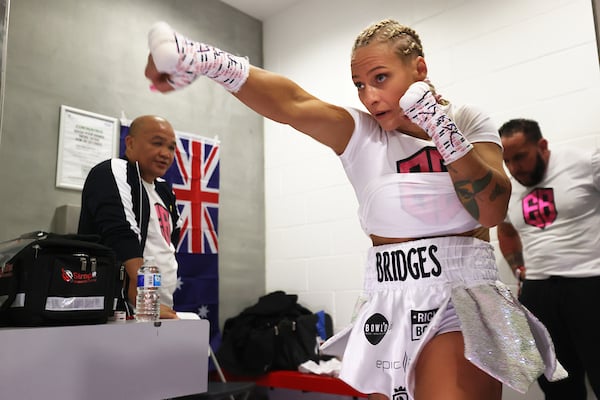 Ebanie Bridges’ left eye is still discolored almost a week later. Parts of her that she didn’t know existed still throb. Though nothing is going to discourage the 5-foot Australian dynamo.

“The Blonde Bomber” fought the last four rounds against new WBA bantamweight titlist Shannon Courtenay (7-1, 3 KOs) on April 10 with her left eye swollen shut, stirring many to debate whether her corner should have even let her out for the final round.

The 34-year-old math teacher backed up almost everything she said in her quest for the vacant WBA belt on the Conor Benn-Samuel Vargas undercard from the Copper Box Arena, Queen Elizabeth Olympic Park, in London. 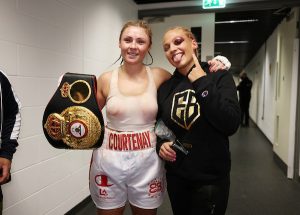 Shannon Courtenay and Ebanie Bridges in a cordial moment after their fight for the vacant WBA bantamweight title (Picture By Mark Robinson/Matchroom Boxing).

“There was a great amount of people who sent me messages after the fight that that was the first female fight that they had ever seen—and I was the reason,” said Bridges, who will remain in England until early May, before returning to Philadelphia, Pennsylvania, to begin training for her next fight. “Shannon should be f—g thanks me for that publicity, because she wouldn’t have gotten s—t, because everybody freakin’ hates her.

“There was a method to my madness. I’m skilled, but she’s skilled, too. Put me in there with anyone and they’re going to be entertained. There was no way that I was not coming out for the last round—no way. I was praying that the doctor wouldn’t come over and check my eye out. I will fight until I die. I’ll fight until I can’t walk, or if I’m knocked out cold. I told Arnel (Barotillo) and Brian (Cohen), my trainers, that I couldn’t see. I wanted them to know that I was listening (to their instructions)—I just couldn’t see.”

Bridges stressed that she’s “all about boxing and “all about entertainment,” and she’s far than “just t—ts.” 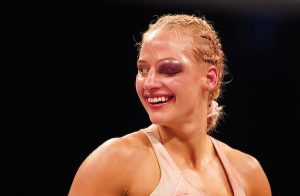 Judges Luigi Boscarelli and Grzegorz Molenda each had it 98-92, and Bob Williams scored it 97-94 all for Courtenay.

After watching a replay of the fight, Bridges had it a 95-95 draw, based on she felt was winning the last round.

“I said from the start that I wished she did stay inside and trade with me, and don’t get me wrong, Shannon fought well,” Bridges said. “When I watched it back, I thought it was a draw. I thought I won the last round. I think the scorecards they read were absolutely f—g ridiculous. I didn’t think I received any credit for my inside punches.

“They didn’t see my punches because they’re short and sharp. The style I fight, which you can say is a Mexican style, they didn’t recognize. I showed I could fight. I made a lot of people eat their words. Since the fight, I’m still getting incredible feedback. No one is literally talking about Shannon.

“They’re talking about me. If it wasn’t for my eye and the head clash, I would have won that fight. But I won the crowd and the amount of love that I’m getting is incredible. I don’t know if anyone could lose as good as I did. I gained a lot from the loss. Shannon is getting a bit of respect, but she wasn’t as doubted as I was.

“It’s gone from one end of the spectrum to the other. There are a lot of people who said that they were sorry that they questioned me.”

Bridges said after the fight she immediately went over to shake hands with Courtenay and she ignored her. But Courtenay’s corner gave Bridges her respect, and eventually Courtenay came over and said, “Wow, I really underestimated you.” 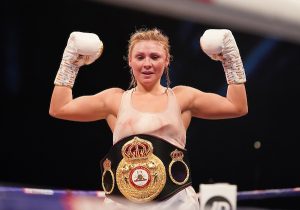 “Shannon definitely did gain my respect, and I do give credit to people. I liked that fight and I like tough girls, and she gave me respect,” Bridges said. “But she ran from me. That was the most disappointing part. That’s what the judges saw. They didn’t see my inside counters.”

Bridges said she plans on returning once she heals up. She has no timetable, though she did gain fans.

“I know how I fight, now the world knows how I fight and fans want to see me again,” said Bridges, who gained 20,000 new followers on Twitter in the last week. “That’s what I came away from this. I felt I fought really well. I deflected punches, and Shannon may have landed two-percent of her punches.

“Shannon said she likes to come forward. She didn’t. She ran around. I wish she did sit and trade with me. She boxed and my eye closed up. I fought the last two rounds blind, but really four rounds. Considering I had one eye for almost half the fight, I did well.

“Whether or not they come and watch me for my boobs, I don’t care. They’re going to come and see me fight again.”