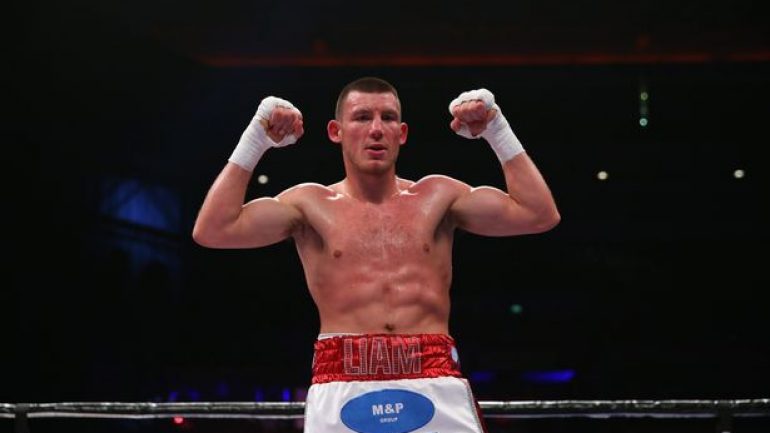 When Liam Williams lost consecutive fights to former WBO titleholder Liam Smith in 2017, it felt like his career was at a crossroads. He could either stick with how things were, or look to stretch himself and go in a different direction.

Ultimately, he decided to make the switch from working with Gary Lockett at home in Wales to traveling 200 miles north to Sheffield, England, to link up with Dominic Ingle in July 2018.

Since teaming up with Ingle, Williams (23-2-1, 18 knockouts) has won all six fights inside the distance and seems to have improved significantly during that time.

“It was something new, it was something fresh, I really needed it, I was going a little bit stale and I wasn’t enjoying what I was doing as much,” Williams told The Ring before travelling to Hollywood, Florida, where he’ll face Demetrius Andrade for the WBO middleweight title on Saturday. “When that happens, that’s when you know it’s pretty much (time to) pack (it) in, or move on and try to salvage and bring back your love for it.

“The main thing was I just needed something new. Me and Dom have a very good relationship. We work very, very well together, we communicate so well. It was a match that was genuinely meant to be, everything fell into place nicely.”

The 28-year-old from the Welsh valleys has clearly matured over the past few years and that has shown in his recent performances.

“I’m more dedicated and focused in myself. My personal life is better. I just feel everything has gone up a level and I’ve improved. I’m just in a better place in life. I’ve changed my attitude toward my training and dedication.”

Williams freely admits that in the past his hunger for the sport wavered.

In 2017, he twice lost to the more experienced Smith (RTD 9 and MD 12). The first fight was highly controversial, which lead to the rematch.

“When I had the first loss, I didn’t take it as a loss because in my mind I didn’t lose that fight,” he explained. “But the second one, when I actually lost, I thought it was a close decision.

“Going into that fight I didn’t really care. Four weeks before that fight I went out for food and got steaming drunk. I didn’t have the right mindset and now I wouldn’t dream of doing that. I haven’t touched a sip of alcohol for 15 weeks. That was my big fight and I was on the booze.

“When I lost that fight it was a harsh realization, I thought, ‘I actually do love this boxing. I’m not a loser, I’m a winner and I need to get back to winning ways. I’m not going to go out like this. He is a good fighter, but I’m better than that, I think I’m better than Liam Smith.’”

Armed with a renewed sense of purpose and a young daughter to provide for, the supremely motivated fighter travels from his home in Wales every Sunday afternoon/early evening to Sheffield to get ready for a week of training under the watchful eye of Ingle. He then drives home for the weekend before repeating the routine.

Williams acknowledges facing Andrade won’t be easy, but nothing worth having ever comes easily.

“It doesn’t take a rocket scientist to know Andrade is a very good fighter,” he acknowledged despite several twitter beefs with his upcoming opponent. “As much as I want to slag him off, you have to be real and be fair and give him his credit as well. He’s very good, they don’t give out world titles for fun. He does deserve credit and he’s got my respect as a fighter.”

However, the offensive minded fighter is dialed in and focused on becoming the 13th Welsh fighter to win a world title.

“I just think at this moment in my life, I have way too much in the locker for him and I won’t be denied,” said Williams, who flew to Florida on April 7th. “I heard him say, ‘These U.K. fighters, I’ve beat a couple, they all come over here and say they’re going to knock me out. I beat Brian Rose; I beat Luke Keeler.’ I thought, with respect to both–I like them personally–they’re not on my level. They don’t bring to the table what I bring. It’s all well and good saying you beat them, but in reality, it doesn’t mean f—k all.

“The mindset I’m in right now, it’s going to take a very, very good man to beat me and a very good man he is, but is he going to be as determined, as driven as me?”

Andrade was a standout amateur who won gold at the 2007 World Championships before representing his country at the 2008 Olympics. He turned professional later that year and has since gone on to win the WBO and WBA junior middleweight titles, before stepping up to win the WBO middleweight title. However, the cerebral southpaw is too dangerous for his own good and not exciting enough to entice rival titlists and big names. Andrade (29-0, 18 KOs) holds wins over Vanes Martirosyan (SD 12), Willie Nelson (TKO 12) and Maciej Sulecki (UD 12).