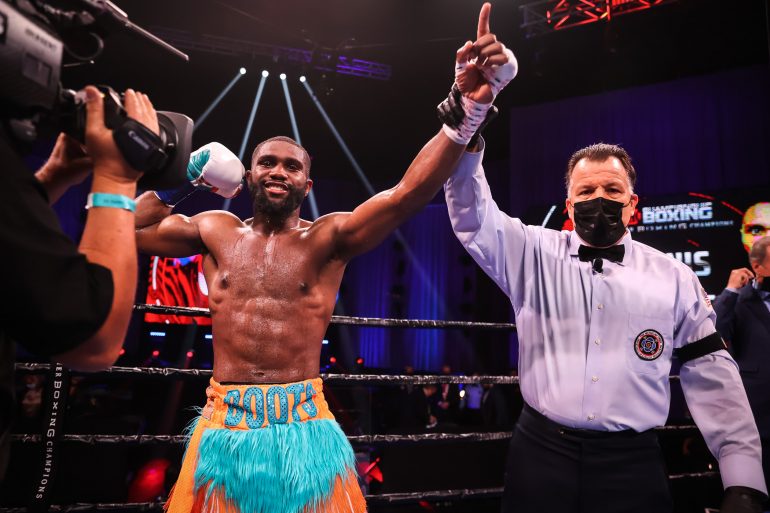 The tantalizing glimpses were here and there, though nothing ever complete because Jaron “Boots” Ennis often vanquished his opponents before they could blink. Former IBF junior welterweight titlist Sergey Lipinets was supposed to provide a “truer test” of what Ennis could be.

It resulted in a pretty scary answer for anyone at 147 pounds.

Ennis (27-0, 25 knockouts, 1 NC) became the first fighter to stop Lipinets, knocking him out with a paralyzing left hook from an inconceivable angle at 2:11 of the sixth round Saturday night from the Mohegan Sun Arena in Uncasville, Conn.

In doing so on the Premier Boxing Champions event on the “Showtime Championship Boxing” national stage, Ennis issued an alarming proposition to everyone else at 147 pounds: Watch out, I’ve arrived.

Ennis is not a rising star—he is a star. He’s just lacking the opportunity.

“Like I said before, there’s only bigger and better fights now,” Ennis said. “We work on (power shots) in the gym. I’m comfortable on both sides (left and right). I’m going to keep on staying more relaxed. When I hit somebody, I get a little excited sometimes.”

So, apparently, does everyone who’s watching.

Ennis closed the first round well. At 5-foot-10, he was three inches taller than the 5-7 Lipinets—and he used it. 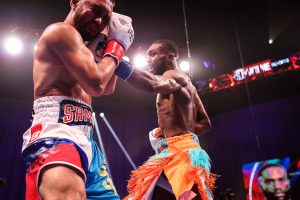 Sergey Lipinets could not escape the constant pressure of Jaron “Boots” Ennis (Photo by Amanda Westscott/Showtime).

He pecked away with the jab, then came at Lipinets with a right to the body. He patiently fired a righty jab, opening other areas to exploit. In the last 30 seconds of the second, Ennis switched again to an orthodox stance.

In between rounds the first and second rounds, the 23-year-old Ennis stood in his corner. Maybe it was to send a tacit message to the 32-year-old Lipinets that his legs are young. In the last half of the third, Lipinets did manage to bang Ennis with an upper-hand right.

With just about a minute left in the third, Ennis had hurt Lipinets several times with a varied attack, using solid lead rights, right uppercuts and left hooks. While doing this, Lipinets couldn’t get within striking distance of the highly elusive Ennis, often swinging at air.

Lipinets returned to his corner a bloody mess. His new trainer, the esteemed Joe Goossen, urged him to stay off the ropes. In the third alone, Ennis landed 30 of 40 (75%) power punches to Lipinets’ sparse 8/34 (24%) offering.

With 1:35 left in the fourth, a quick Ennis right uppercut seemed to send Lipinets down for the second time in his career (the first came in his previous loss to Mikey Garcia in March 2018; Ennis has 18 knockdowns in his last nine fights).

A replay, however, showed Lipinets was not actually hit. He got his feet tangled with Ennis’ feet and tripped. Still, referee Arthur Mercante missed it. Once Lipinets got back up, Ennis returned to his patient, tight attack.

Entering the fifth, Goossen urged Lipinets to keep smartly coming forward. That wound up being a mistake. After what had already been a punishing sixth round, Ennis capped it off with an overhand right, followed by a left uppercut while positioned on the left side of Lipinets.

The left uppercut, which found Lipinets’ chin, proved to be the deciding blow. Mercante—nor anyone else—did not miss that. Mercante didn’t even bother to count, waving it over at 2:11 of the sixth.

In the co-feature, welterweight Eimantas Stanionis (13-0, 9 KOs) remained undefeated with a unanimous 12-round decision victory over Thomas Dulorme (25-5-1, 16 KOs). Dulorme now drops to 1-1-3 over his last five fights. 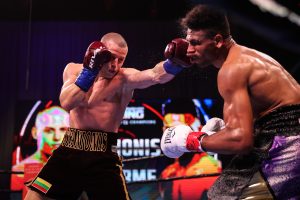 “This fight came with a lot of pressure,” Stanionis said about the WBA title eliminator victory. “It was a long journey, and it was hard, but it was worth it. (Dulorme) was a little awkward, it hard to catch him with the right hand. He was catching me to body. No excuses, but I hurt my hand. I don’t know what round it was.

“He surprised me. He’s a little quicker than I thought. He was very smart and his head movement was very good.”

Working with new trainer Ismael Salas, Dulorme was more mobile than in the past. But he did get caught more than few a times standing still. And paid a price for it. The question that began to work its way to the surface was whether or not Dulorme would begin slowing down by the pace.

That began looking more evident in the fifth. Stanionis began connecting with the jab more consistently, and landed a great looping left hook. Dulorme began leaning against the ropes more frequently in the fifth, again further signs fatigue was setting in, while staying in the pocket a little too much and absorbing Stanionis’ body work.

By the 8th, Stanionis’ work rate out distanced Dulorme’s. It was a telling reversal, since Dulorme had outthrown Stanionis through the first seven rounds.

Over the last five rounds, Stanionis outlanded Dulorme in three of them.