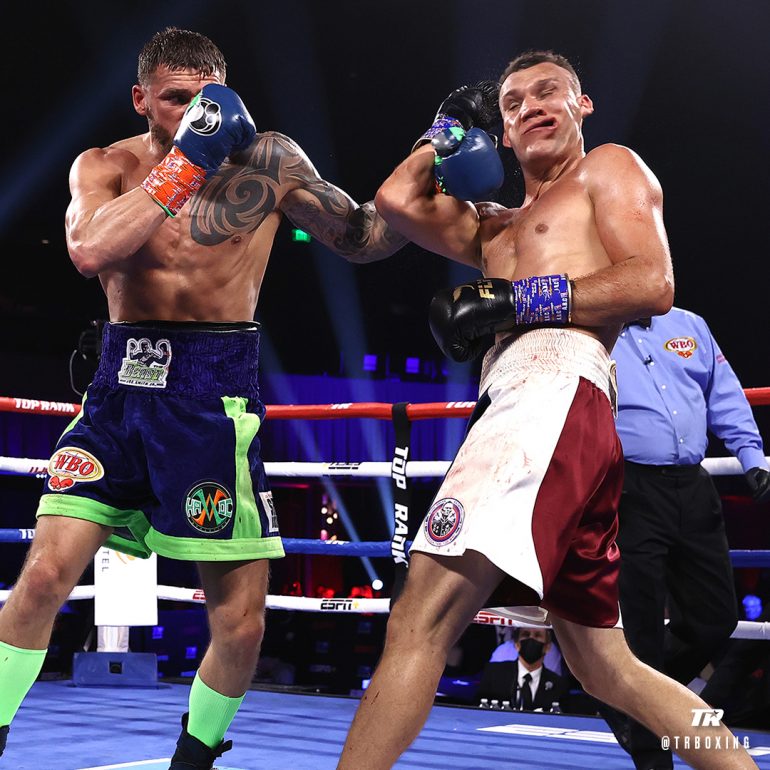 When Joe Smith Jr. finally embarks on his honeymoon, he will do so as the WBO light heavyweight titleholder.

Smith and Vlasov engaged in an action-packed, competitive bout before a  sold-out crowd at Osage Casino in Tulsa, Oklahoma. But it was Smith, who completed his journey from union laborer to championship prizefighter, walking through hell to rally in the championship rounds to edge Vlasov by majority decision to win the vacant belt.

In a bout that was initially postponed for eight weeks after Vlasov tested positive for COVID-19, the 31-year-old Smith (27-3, 21 KOs), who won by decision for just the second time since 2015, battled through a terrible cut above his left eye for much of the fight.

The 6-foot-3 Vlasov (45-4, 26 KOs) vowed to pull the upset. He entered the ring on a three-fight winning streak dating back to a 12-round unanimous decision loss at the hands of Krzysztof Glowacki for a secondary cruiserweight championship.

But none of the judges ruled in his favor.

Vlasov disagreed with the decision and felt that he dominated the fight.

After balancing chopping trees and boxing, Smith, who made his pro debut in October 2009 with a first-round knockout in Connecticut, was calm and collected after scoring his first major title.

“It’s a great feeling. It was definitely a close, tough fight,” Smith told ESPN. “I [have to] give it to Vlasov. [He’s a] great fighter. He really put on a great show tonight and toughed it out.”

Both fighters began at a frantic pace in the opening round. Vlasov found success with the right hand, bewildering Smith with his awkward, herky-jerky style.

At the end of the round, Smith suffered a small cut above his right eye, which sent cutman Jacob “Stitch” Duran into battle mode.

With blood seeping from the eye, Smith fought with a sense of urgency in the second round, hurting Vlasov with a huge right hand in the final moments.

Palpable energy was put forward by both fighters as the third round began. Smith appeared to be finding his rhythm and fighting smarter, while Vlasov was still trying to find stability in his legs.

Vlasov walked down Smith in round five and took some damage in the process as he walked into a slew of right hands.

In round six, Smith, fighting for the first time in the state of Oklahoma, saw the cut over his left eye open up once again, allowing Vlasov to capitalize. The Russian connected with a right hand that backed Smith into the ropes.

Smith badly hurt Vlasov in round seven, sending him stumbling with a counter left hook. However, the 34-year-old Vlasov, fighting in his 48th professional bout, withstood the punishment and survived.

Vlasov recovered nicely in the eighth round, connecting with a solid uppercut. He followed up with a strong performance in the subsequent frame as Smith was visibly winded, walking him down and landing solid power shots.

In round 11, Smith hurt Vlasov with a right hand that forced his opponent to, as he did for much of the fight, hold. Referee Gary Ritter then warned Smith after he landed a shot behind the head that sent Vlasov to the canvas.

But Smith felt that Vlasov put his head down, which forced the shot to land behind the head.

“I believe he had his head down, and I should’ve got the [knockdown],” he added. “I think I would’ve got the stoppage that [11th] round, but he pulled it off and made it out on his feet.

“I believe I got the victory tonight because they saw I landed the harder shots. He landed a lot of punches. It was a great fight.”

“I never felt that I was behind at any stage of the fight,” Vlasov added. “This was my opportunity to show the world I was a world champion, and I did that, and Joe Smith knows I did that.”

In the chief support bout, Efe Ajagba, fighting for just the second time under the tutelage of head trainer Kay Koroma, turned the lights out on Brian Howard, knocking out his opponent cold in the third round of a scheduled 10-round heavyweight bout.

Ajagba (15-0, 12 KOs), fighting for the first time following surgery on both elbows, connected with a one-two combination that twisted Howard around and face-first to the canvas. Referee Tony Crebs immediately called for the ringside doctor to attend to the fallen Howard (15-5, 12 KOs), who formerly competed at the cruiserweight division.

“I trained for this fight, took my time, started with my boxing foundation, and came back strong,” Ajagba told ESPN after the fight. “This camp was the best one for me, the best camp ever in my boxing career.”

“I respect him for getting in there and showing up today. It’s a man’s sport. I’m just grateful to be here, thankful for the opportunity,” Anderson said.

“I [saw] the shot. His hands kept going up. I kept throwing my jab, looking for openings, feinting, moving around the ring, and it just came. It was a good shot, and he didn’t want to get back up.”