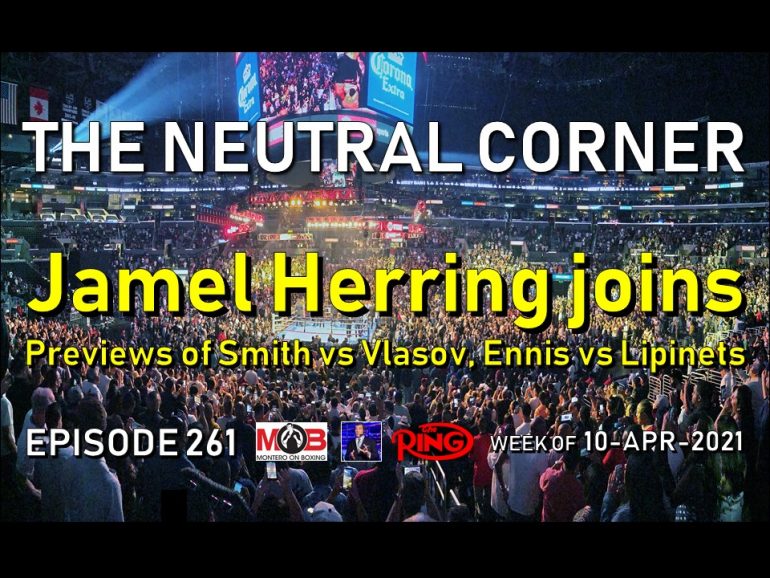 On episode 261 of The Neutral Corner boxing podcast, host Michael Montero was joined by Jamel “Semper Fi” Herring. The WBO junior lightweight titleholder is coming off a career-best performance, scoring a TKO 6 win over Carl Frampton in Dubai last Saturday.

Herring (23-2, 11 knockouts) and his promoter Top Rank have several options regarding his next opponent. Undefeated, 23-year-old Shakur Stevenson looms as Herring’s WBO mandatory. Former three-division champ Vasiliy Lomachenko has mentioned moving back down to 130-pounds. Even Joseph Diaz Jr, currently rated no.3 in the division by RING, is a possible option.

But when asked about who he preferred to fight next, Herring made it crystal clear.

“The choice is Oscar Valdez,” he told The Ring. “Nothing against Shakur Stevenson, I feel like he’s going to be a great ambassador for the sport of boxing. But I would choose Valdez because of where he’s currently at on the totem pole. Valdez is hot right now, he just beat the guy (Miguel Berchelt) that I’ve been chasing since I won my title.”

“In order for you to be seen as the champion of a division, you have to unify titles or fight for that lineal championship.”

“I grew up looking at the Ring Magazine ratings. There are all of these titles all over the place, but not everyone can get a hold of the Ring Magazine belt. If I can get the opportunity to put myself in position to fight for that title, why not?”

Herring said he would be willing to dump his WBO title if necessary to get the fight with Valdez. Further, if and when that fight does happen, the former Marine understands that he will be seen as the underdog. It’s a role that he happily embraces.

“I’ve always been the underdog, been doubted, but I don’t mind. Just give me the opportunity to showcase and prove that I can beat the best in my division.”

In Australia, Tim Tszyu beat Dennis Hogan on Wednesday, March 31. “The Soul Taker” dominated from the opening bell, dropping Hogan in the fifth round, promoting his corner to throw in the towel. Tszyu improved to 18-0 (14 KOs) with the win.

On Saturday, unified junior featherweight titleholder Murodjon Akhmadaliev improved to 9-0 (7 KOs) with a TKO5 victory over Ryosuke Iwasa in Uzbekistan. Shakhram Giyasov, Israil Madrimov, Bakhodir Jalolov and other Uzbek prospects scored wins on the undercard. In Dubai, Jamel Herring dropped Carl Frampton twice, scoring a TKO6 win to defend his 130-pound world title. Frampton, the 2016 Fighter of the Year, announced his retirement after the bout.

Thad called in to talk a little boxing history, and bring it full circle with the upcoming Joe Smith vs Maxim Vlasov fight, which could lead to bigger things in the light heavyweight division down the line.

“It’s the 105th anniversary of Jess Willard, the Galveston Giant, knocking out Jack Johnson,” he said. “Fans should realize that boxing is one of the richest traditions in American history. I’m looking forward to Joe Smith fighting this weekend. I think he’ll beat Maxim Vlasov and I think he has the best chance to beat (current WBC/IBF champ) Artur Beterbiev in a future unification fight. Who knows, we might have an American-born light heavyweight champion very soon.”