Carl Frampton says Jamel Herring fight was to be his last, regardless of outcome 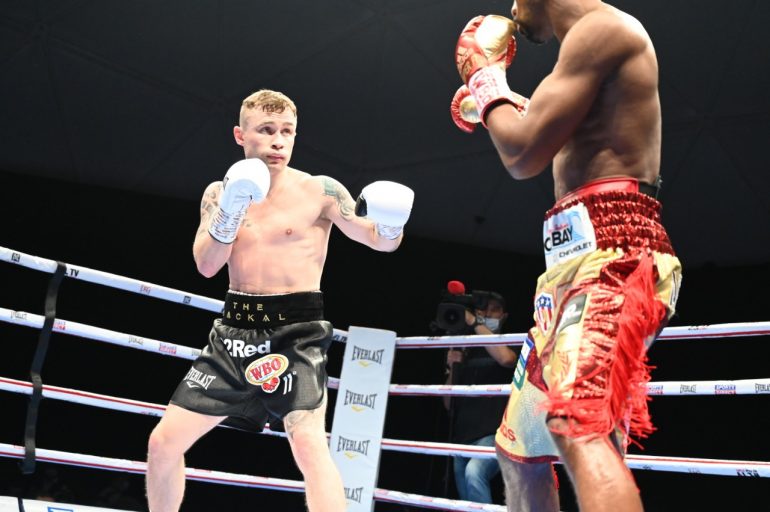 Carl Frampton reiterated his intention to retire from the ring on Tuesday, saying his challenge of WBO junior lightweight titleholder Jamel Herring this past Saturday was going to be his final fight, regardless of the outcome.

“I made a promise to myself and to my wife and kids – the most important people in my life – that whatever the result, that was my last one,”  said Frampton in a statement released on his social media platforms.

Frampton, who finishes his pro career with a 28-3 (16 knockouts) record, was dropped twice in suffering a sixth round technical knockout loss to Herring in Dubai. The defeat was his first time to be stopped, and spoils his attempt at a world title in a third weight class. The 34-year-old from Belfast, Northern Ireland started his pro career in 2009, winning the IBF junior featherweight title in 2014 with a decision win over Kiko Martinez, making two title defenses before outpointing Scott Quigg by split decision in 2016 to unify the WBA title with his own.

Frampton capped off his 2016 by stepping up to 126 pounds and defeating Leo Santa Cruz by majority decision to win the WBA featherweight title, earning him Fighter of the Year honors from the Boxing Writers Association of America and The Ring magazine. His career would lose some of its luster from there, losing a decision to Santa Cruz in a rematch the following year, but outpointing Nonito Donaire Jr. in 2018 and handing Luke Jackson his first defeat after that. He had one more attempt at a featherweight title, losing a decision to Josh Warrington in 2018 for the IBF belt, and won twice more against lesser opponents before the Herring outing.

“When I look back on my career I have achieved more than I could have ever imagined. Celtic, Commonwealth and European titles, winning my first world title at home in a purpose-built arena, the sold-out nights defending that title at the Odyssey, unifying a division, defeating a top ten pound for pound guy, winning a title in a second division against the odds, Ring Magazine Fighter of the Year, MBE, and fulfilling a dream by fighting and winning in front of a packed Windsor Park,” said Frampton.

“For me though, my biggest career achievement has been my fan base and support. I can’t express how thankful I am to the army of fans who made those nights in the Odyssey so atmospheric, the 16,000 that saw me win my first title at home on that special night, the 15,000 who travelled to Manchester the night we took over and I unified, and the thousands that travelled to the States to watch me fight a great champion in Leo Santa Cruz.”

Frampton thanked the fans for the outpouring of support that he has received since the loss and his subsequent retirement announcement. He thanked his wife, Christine, as well as his children, Carla and Rossa. He paid respect to his wife, who he said had sacrificed her own aspirations early on to help him fulfill his own in the ring.

“Christine has made sacrifices that I am eternally grateful for; giving up on her own aspirations to allow me to fulfill mine, supporting me financially at the start when I had nothing, and supporting me emotionally throughout my career without ever asking for anything in return,” said Frampton. “I owe her so much and now I would love to help her chase her own dreams.”

Frampton looked back to the first time he started boxing at age 7, when he walked into the Midland/White City ABC. He says that he saw the special quality in himself that would carry him to success throughout the rest of his career. He hopes that his example can be of inspiration to others wishing to make their own dreams come true in the ring.

“I learnt early on that resilience and determination was the only difference between me, and the many other kids who I lost to growing up as a young amateur,” said Frampton.

“So, to anybody out there chasing dreams, if you want it enough you can get it.”