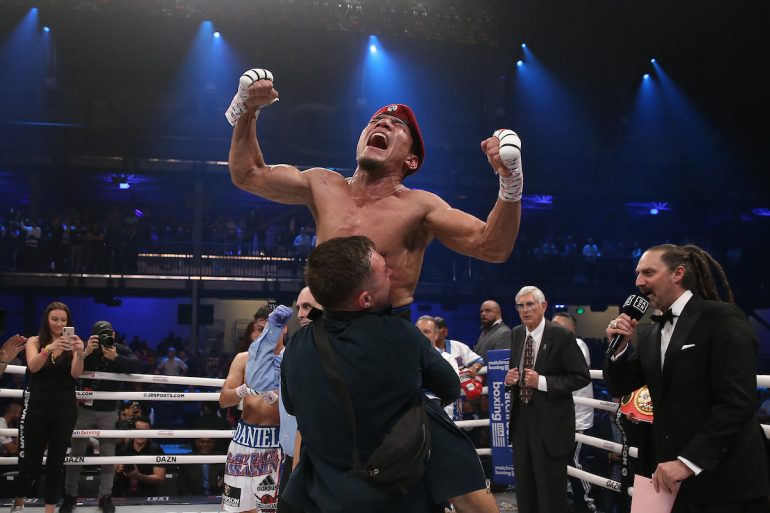 Fighting for the first time as a pro before his home fans in Uzbekistan, Murodjon Akhmadaliev retained his WBA and IBF super junior featherweight titles for the first time with a fifth-round stoppage of onetime IBF titlist Ryosuke Iwasa at Humo Arena in Tashkent.

Although both men were coming off long layoffs — more than 14 months for the unified titleholder and almost 16 months for the challenger — Akhmadaliev appeared far sharper, especially with ramrod jabs that soon reddened Iwasa’s left eye. Iwasa tried to neutralize Akhmadaliev’s aggression with movement and frequent jabs, but his efforts were largely foiled by his opponent’s head movement and blocking techniques.

Akhamadliev, the 2016 Olympic bronze medalist, steadily increased his attack beginning in Round 2, but the pressure escalated markedly at the start of Round 5. His fusillade left Iwasa wobbling on unsteady legs, but while the challenger managed to survive Akhmadaliev’s opening wave, another volley of unanswered blows along the ropes prompted Russian referee Yury Koptsev to suddenly step between the fighters and halt the action at the 1:30 mark. While the partisan crowd of approximately 10,000 cheered the stoppage, the move appeared premature as Iwasa, though under duress, was still executing defensive moves.

However, the tide toward an eventual Akhamadaliev victory appeared unassailable, and his dominance could be seen by the following CompuBox stats: Although Iwasa was more active (74.7 punches per round to Akhamadliev’s 69.1), the titleholder was more accurate in all phases (35%-11% overall, 34%-7% jabs, 36%-20% power), and that, in turn, resulted in connect leads of 109-36 overall, 65-17 jabs and 44-19 power. In Round 5 alone, Akhmadaliev landed nearly as many total punches (31) and power shots (18) as Iwasa recorded in the entire fight (36 and 19 respectively).