Jose Zepeda, Elvis Rodriguez added to Taylor-Ramirez card on May 22 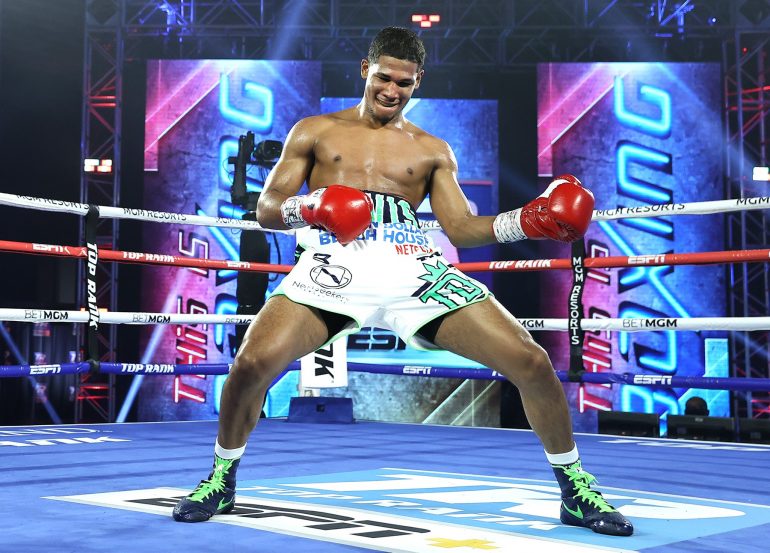 It will be a night of junior welterweights on the Top Rank card on May 22.

No official word on where the card will take place, although the MGM Grand Garden Arena and Michelob ULTRA Arena at the Mandalay Bay Resort and Casino in Las Vegas are the frontrunners.

Zepeda (32-2 1 NC, 26 knockouts), who is originally from La Puente, California and now resides in Mexicali, Mexico, overcame four knockdowns to knock former world titleholder Ivan Baranchyk out in round 5 of an all-out war. The fight was named ‘Fight of the Year’ by The Ring.

The southpaw challenged Ramirez in February 2019, losing by a close majority decision. After fighting to a no-contest over three months later against Eleazar Valenzuela, Zepeda has won his last three fights, including the victory over Baranchyk.

The 31-year-old also fought for a world title in July 2015, facing then-WBO lightweight titleholder Terry Flanagan, losing by knockout after round 2 after he retired on his stool after dislocating his left shoulder during the previous round.

Zepeda is confident a victory over Campa will put him in an opportunity to fight for a world title belt.

“I’m ready to go,” said Zepeda, who is co-promoted by Top Rank and Zanfer Promotions. “After my Fight of the Year with Baranchyk, I’m better than ever. It’s only a matter of time before I become a world champion.”

Campa (32-1-1, 21 KOs) defeated gatekeeper Carlos Cardenas by majority decision in his last bout on February 6 in his hometown of Hermosillo, Mexico. Campa was penciled to face Adrien Broner on February 20, but he had to withdraw from the fight after testing positive for COVID-19 in early January.

The 29-year-old is unbeaten in his last six bouts since suffering his only loss of his career at the hands of journeyman Carlos Jimenez in October 2017.

Rodriguez (11-0-1, 10 KOs), who resides in Santo Domingo, Dominican Republic, went the distance for the first time in his pro career in his last bout on February 20, defeating Argentina’s Luis Veron by unanimous decision. The hard-hitting southpaw made a name for himself by notching knockout victories in his four previous fights that took place in Top Rank’s ‘Bubble.’

The 25-year-old knows what a victory over Sims would mean early on in his career.

“I am happy and grateful for this opportunity, and I am going to make the most of it,” said Rodriguez, who is managed by Benji Lieblien and trained by Freddie Roach. “It is a great step for my career, and I want to continue to show the boxing world that I have the talent to achieve great things.”

Sims (15-2-1, 5 KOs) has won his last two fights since his loss to Samuel Teah in November 2018. The Chicago, Illinois fighter lost by one point to Jose Ramirez at the 2012 U.S. Olympic trials and has sparred against Manny Pacquiao and Jorge Linares. He does have amateur victories over Lamont Roach, Jr., O’Shaquie Foster, and Albert Bell.