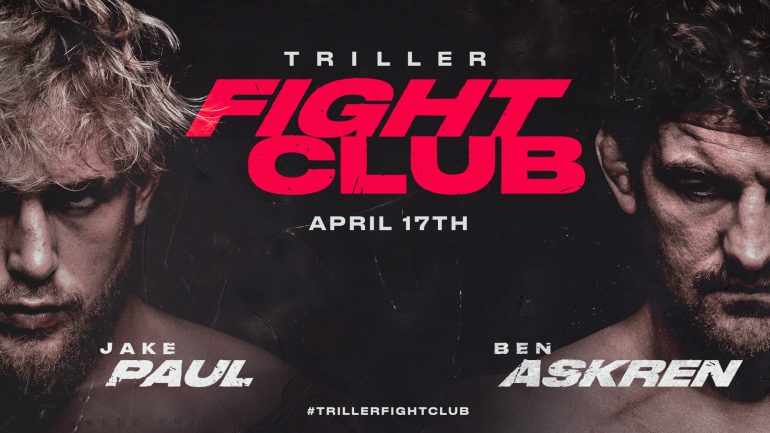 The old guard would scoff at it. They would. Between Jake “The Problem Child” Paul and Ben “Funky” Askren they have two professional boxing matches.

Both knockouts over nondescript novices making their professional debuts.

Yet, the Paul-Askren matchup will be the eight-round main event of the four-hour pay-per-view Triller Fight Club’s April 17 showdown at the Mercedes-Benz Stadium, in Atlanta, Georgia.

It may not be for the over-50 codgers, but that’s not exactly the target audience here. It’s certainly not for the boxing purists, who don’t exactly fit into the aimed demographic, either.

What can’t be argued is that it will be entertaining, regardless of how much Paul and Askren flail at each other over eight rounds.

On Friday, Triller launched a virtual press conference announcing to the public its grand plan. Triller Fight Club co-owner Snoop Dogg will join a cast of fellow hip-hop artists like Ice Cube, Too $hort and E-40 (Mt. Westmore) during the entertainment portion of the show.

And there will be real live fighters, too, like Regis Prograis (25-1, 21 knockouts), Ivan Redkach (23-5-1, 18 KOs) and former multi-cruiserweight titlist Steve “USS” Cunningham (29-9, 13 KOs). Cunningham last fought in 2017, and he’ll be taking on former two-time UFC heavyweight champion Frank Mir, who will be making his pro boxing debut and last fought professionally in October 2019.

Emmy-winning filmmaker Bert Marcus is pounding the drum, leading the way in Triller’s reimagining of boxing as a new kind of cinematic entertainment.

“Viewers on April 17 will be immersed into a world unlike anything they could imagine, a true movie-like experience that reinvents the great sport of boxing by taking them into the ring in ways they’ve never seen before,” Marcus said. “Also deep into the behind-the-scenes action with our fighters and musical performers as it unfolds in real time.”

Ryan Kavanaugh, the head of Triller, sees what Triller is doing as a possible future to where boxing is heading—as a combination boxing show/entertainment mix.

“This group of headline talent from all areas of music and entertainment will make this the must-watch event of 2021,” said Kavanaugh. “Nowhere else will you be able to see this mix of pop culture, comedy and hip-hop legends and top-notch fights in one place.

“April 17 will be the new standard not just for boxing, but for a new genre of entertainment and sports that Triller Fight Club is creating and implementing for fans of every demo, genre and age. We’ve already broken pre-sale records, and just wait for what’s to come.”

There may not be many 50-plus codgers tuning in and paying, but there could be a vast new audience willing.