Women’s Ratings update: Serrano gains ground in the P4P rankings, jumps to No. 3 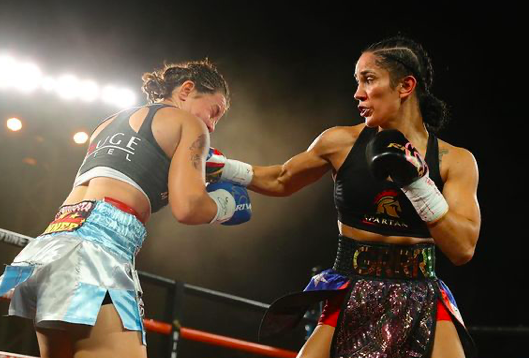 For years, Amanda Serrano and her very vocal fan base demanded greater respect for the impeccable body of work of the Puerto Rico-born boxer-puncher. For most of those same years, Serrano’s critics and friends alike demanded a worthy opponent that would help her make her case and lay claim to her demands of a higher classification among the world’s best practitioners of the “sweet science of bruising.”

On Thursday, March 25th, both camps got their wishes.

Fighting in her homeland, Serrano scored a decisive win against a fellow Ring pound-for-pound entrant, stopping Argentina’s Daniela Bermudez in nine exciting rounds to elicit all kinds of laudatory remarks from all corners of the boxing universe, and earning the right to jump one spot in The Ring’s mythical ranking to No. 3, after a unanimous vote.

“Finally, Serrano shut my mouth with her performance … she looked very good,” said panelist Irene Deserti, editor of Rincon Rojo magazine in Mexico. “She was very fast and accurate.  Bermudez had no strategy (…) but despite that, she was very dangerous and Serrano knew how to be patient and smart.”

As much as Deserti can claim that she is no longer a doubter, others simply reminded everyone that they were never in that group in the first place.

“I have never doubted Amand’s boxing quality,” said Wildalys Figueras-Snow, editor of Boxeo con Lipstick in Puerto Rico. “What I do regret is the few opportunities she has had to showcase her carats against opponents who truly pose a challenge for her, as was the case with Daniela. From the beginning, Daniela tried to gain respect by harassing Amanda. However, Amanda (imposed) her strength, speed, and handling of the ring. It was a textbook performance.”

Bermudez was jumping two weight classes to meet Serrano (a divisional wanderer who has racked in a record number of titles across seven divisions) and the physical difference between them was notorious. And yet, it was Serrano’s boxing IQ that shone the brightest against the breathtaking backdrop of El Morro castle in the makeshift outdoor venue set up at the Plaza del Quinto Centenario in Old San Juan.

“Serrano coped with Bermudez’s persistent aggression with expert mid-range boxing until Bermudez was exhausted and then closed the show with two well-placed body shots, displaying a dimension that I wasn’t aware she possessed. It was a fabulous performance,” said panelist Mark Jones.

“To my mind, Amanda Serrano truly delivered,” agreed panelist and boxing historian Malissa Smith. “I’ve been lucky enough to see her fight live in a few outings and for the most part have felt her opponents did not give her the chance to show the full range of her skills and capabilities. In fighting and outclassing Bermudez a well-regarded legitimate champion in her own right, Serrano solidified herself not only as belonging in the P4P, but in capturing the No. 3 position in a way that could easier lead her to the No. 1 position depending on how the fights break over the next couple of years.”

The panel’s Far East representative went even a little bit farther than that.

“Serrano might be No. 1 in P4P,” said Japan’s Yuriko Miyata. “I was impressed by her performance against Bermudez, much more than by those of any other top fighters,” she said, referring to the current 1-2 tandem of Katie Taylor and Claressa Shields, who hold on to their positions for now but who will certainly feel the breath on their necks from “The Real Deal” in the coming years.

Bermudez, on her part, did more than enough to keep her place at No. 8 in the pound-for-pound rankings, after bravely taking this challenge and landing more than a few solid punches through Serrano’s often porous defense in the early going.

“The Argentine boxer did what she knows best and what always worked for her: put pressure and throw everything she has,” said Yesica Palmetta, who followed Bermudez’s career since her earlier days in Argentina. Figueras-Snow agreed, with a positive comment of her own: “Her courage and willingness to win were admirable.”

During the same week, Mexico’s Arely Muciño (ranked at No. 2 at flyweight) and Kazakhstan’s Tatyana Zrazhevskaya (unranked) also saw action, but their wins were not deemed worthy of any movements in The Ring’s current top 5 in their respective divisions.