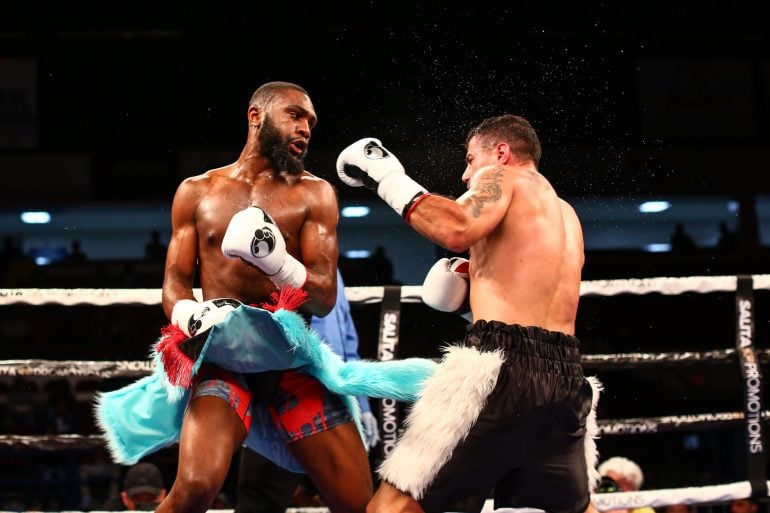 Jaron “Boots” Ennis carries an even demeanor, even when the rising undefeated Philadelphia welterweight prodigy is fighting. He usually leaves the ring with a smile—that’s because he always wins.

That’s because his first scheduled 12-round bout ended in a no-decision, after his opponent, Chris van Heerden, suffered a gaping cut on his forehead in the first round that put an end to Ennis’ 16-fight knockout streak.

This will be Ennis’ second scheduled 12-rounder.

During a virtual press conference last Friday, Lipinets said, “Well, ultimately, we all wanna become champions of the world. And this is one way to do it, to fight guys who will put you in a position that you can’t be denied anymore. That’s the bottom line. You know, Jaron is not a boogeyman. He’s just another fighter with two hands and two feet. That’s what we’re doing, we’re fighting.

“We’ve watched Jaron fight. And definitely, this is the guy that will not shy away. He will not try to stay on the outside and be cute. He will come and he will fight. That’s one of the appealing things (to us), that we like. So, you know, that’s definitely gonna be the fight of the night, no questions about it.”

Lipinets may be in for a big problem. Ennis is angry. He didn’t want his knockout streak to end the way it did in his last fight. He still harbors that resentment and it may be taken out on Lipinets.

“No one has ever knocked Lipinets out, and me winning and doing it in knockout fashion would make a big statement in the welterweight division,” Ennis said. “I see this as a title-shot year for me. By the end of the year, I should have a title shot. I have to keep doing what I’m doing.

“I’m not worried about the other guys in the division. This is my division. It’s time for me to take over. The goal is a knockout at the end of the night. My attitude hasn’t changed. It’s always about forcing my opponent to adjust to me. A lot will come out and we’re going to show a lot of new things on April 10.”

With the motivation of Boots’ last fight.

“Boots is out to make a statement this time,” said Bozy Ennis, Boots’ father and trainer. “He wanted to make that statement in his last fight. I know it bothered Boots. He wanted to win that fight on his terms. Lipinets has a hard head. Everyone saw what Boots did against Bakhtiyar Eyubov (in January 2020). They had to stop that.

“People haven’t everything Boots can do. We respect Lipinets. He is a good fighter. He didn’t become a world champion for nothing. But he’s never faced anyone like Boots. We’re cutting the weight and Boots feels good.”