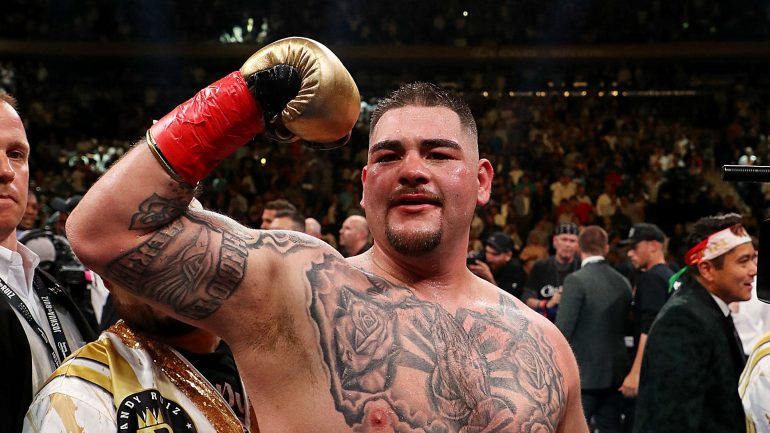 Andy Ruiz could look at his reflection in the mirror these days. There’s a lot less of him staring back. For a time there, the echo Ruiz saw wasn’t a good one.

Ruiz, the former IBF/WBO/WBA heavyweight titlist, is down to 258 pounds. He’s working with renowned trainer Eddy Reynoso—and he’s listening. “The Destroyer” sounds like he’s in a great place in his life and knows he lost his rematch to Anthony Joshua on Dec. 7. 2019 for all of the wrong reasons.

The man who beat Andy Ruiz that night was Andy Ruiz.

Ruiz (33-2, 22 knockouts) will be making his first comeback fight since that defeat on May 1 against rugged veteran Chris Arreola (38-6-1, 33 KOs) on a FOX Sports PBC Pay-Per-View ($49.95) from the Dignity Health Sports Park in Carson, California.

“The night I fought Joshua in the rematch I weighed 298 pounds, and I wasn’t right at all,” Ruiz admitted. “I cheated myself. Honestly, I didn’t feel confident in myself, because I knew I didn’t train the right way. I have to be held accountable for that—no one else. 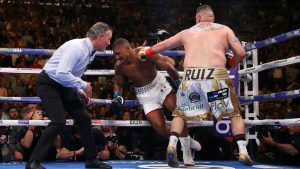 Andy Ruiz is looking to find that version of himself that shocked the world the night he beat Anthony Joshua in June 2019.

Ruiz admitted he took a lot of self-reflection and he knew he had to return back to who he is.

What changed his course was reaching out to Canelo Alvarez. The world’s No. 1 pound-for-pound fighter was willing to listen to Ruiz and suggest he join Team Canelo and Reynoso.

“For Canelo to take me in meant everything,” Ruiz said. “It told me a respected world champion like him still believed in me. I am a different man. There is a big difference, now that I have the right team and the right people around me.

“Coach Reynoso doesn’t play around. If you’re not doing your work, then get out of the gym. That’s his attitude. He’s helped me believe in myself again. I’m not saying my last team didn’t motivate me, but I’m surrounded by champions.

“I have Canelo here, I have Ryan Garcia there, I have world-class fighters around me everywhere. If you can’t be motivated by them, there’s nothing that can motivate you. These are great people and it’s a great vibe.”

Ruiz said he began looking at life differently. He wishes he could have lived differently when he had the title belts.

The bottom line, however, is that who Ruiz was that special night, June 1, 2019, when he shocked the world and stopped Joshua is in still there. Ruiz said he sought out to seek peace with Robles, and Ruiz admits some of the things Robles said was true about him.

“I need to change to become a two-time Mexican heavyweight champion of the world,” Ruiz said. “Manny let out his feelings, but at the end of the day, I have to do what’s best for my family. Hopefully, there won’t be a lot of flab flying around like there was in Saudi Arabia the night I fought Joshua.”

Then Ruiz belted out a raucous laugh.

When Ruiz was six, he was fighting 12- and 13-year-olds, because he was deemed “too big” to fight kids his own age. And Ruiz was beating them.

He’s heard it all of his life.

“I can smile and laugh now,” Ruiz said. “A year ago, I don’t know if I would have been able to do that. I got knocked down and I got back up and fought. I’ve done it my whole life.”