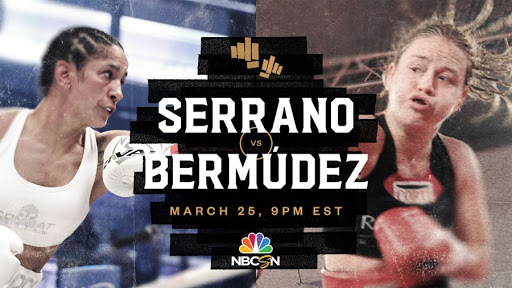 Amanda Serrano exemplified once more why she is “The Real Deal” but she might have to change her name to “The Body Snatcher.”

Serrano defended her unified WBC and WBO featherweight titles in a masterful performance over Daniela Bermúdez, Thursday evening, in an NBC Sports Network-televised bout, at Plaza del Quinto Centenario, in Old San Juan, Puerto Rico. The seven-division champion scored a ninth round knockout with a combination to the body that left the 31-year-old title challenger writhing in pain before taking a knee, ultimately ending the fight.

Serrano entered the ring with a nine-year winning streak, while Bermúdez had a seven-year spell. While their stretches were in close proximity, the same could not be said regarding the fight.

The 32-year-old Serrano, one of women’s boxing’s top pound-for-pound fighters, demonstrated painfully that there are levels to the Sweet Science.

“I knew I was going to be able to walk her down,” Serrano said. “I had a lot more power than her and I knew [the knockout] was going to come.”

Before the action got underway, Serrano and Bermúdez exchanged flags from their respective birthplaces, Puerto Rico and Argentina, in a display of sportsmanship.

The first round was anything but amicable as both ladies threw hard leather from the opening bell. Serrano connected with a slew of combinations and Bermúdez fired back with a couple of right hands late.

Serrano was in firm control by the second round, countering Bermúdez’s jab effectively behind her immaculate speed advantage and backing her up with the right hand.

Whatever she was attempting to do fell short as Serrano responded in kind with a pair of left hands that thwarted her attack.

Serrano hurt Bermúdez, who was stopped for the first time in her career, in Round 8 with a precise right hand to the body. She then followed up with a straight left hand that snapped her head back.

The end came at 1:33 in Round 9 when Serrano parried Bermúdez’s left jab and countered with a two-punch combination that culminated with a right hook to the body.

“The knockout came in the ninth, which shows I have power to the very end,” Serrano said. “We were ready for a 10-round war.

“It just happened the body shot [ended the fight]. I might have to change my name to The Body Snatcher.”

In the chief support bout, junior featherweight Carlos Caraballo (14-0, 14 KOs) extended his perfect KO rating to 14 fights with a fourth round destruction of Leonardo Baez (18-4, 9 KOs), who suffered his second consecutive KO defeat.

“I’m 100 percent sure that I’m the most distinguished prospect [from Puerto Rico],” Caraballo said following his victory.

The 25-year-old Caraballo has knocked out 10 of his 14 opponents within the first four rounds.