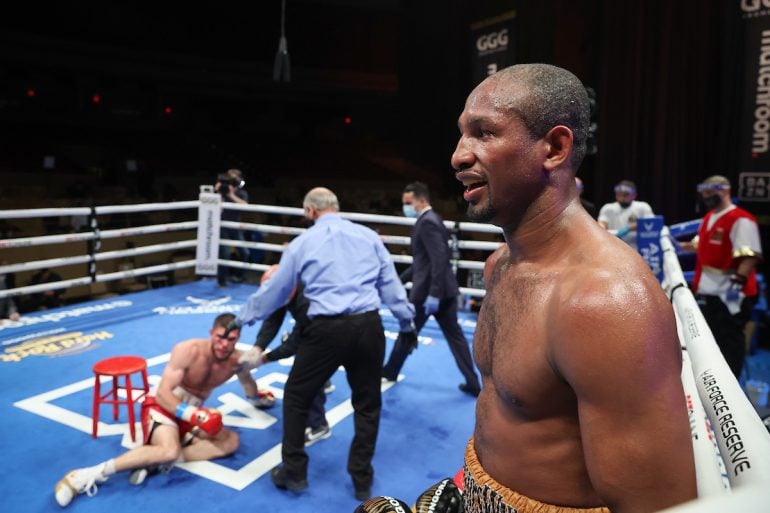 Carlos Gongora celebrates after knocking out Ali Akhmedov in round 12. Photo by Melina Pizano/Matchroom
25
Mar
by Ryan Songalia

Carlos Gongora will return to the scene of his breakout win on April 17 when he faces spoiler Christopher Pearson at the Seminole Hard Rock Hotel and Casino in Hollywood, Florida.

The bout will support the WBO middleweight title fight between titleholder Demetrius Andrade and mandatory challenger Liam Williams. The card airs live on DAZN in the United States.

Gongora (19-0, 14 knockouts) of Esmeraldas, Ecuador is fighting for the first time since signing with Matchroom Boxing following his last fight, a 12th round upset knockout of Ali Akhmedov. The bout is at 168 pounds, but unlike Akhmedov, Pearson (17-2, 12 KOs) won’t have a significant size advantage to work with, as both are career middleweights fighting above their most natural weight.

Pearson, 30, of Trotwood, Ohio is coming off his biggest win to date, a unanimous decision over Yamaguchi Falcao in May of 2019, but will have been inactive for nearly two years by the time he gets in the ring. A southpaw like Gongora, he is three inches shorter at 5’10”.

Pearson has won three straight since his last defeat, a second round knockout loss to Justin DeLoach in 2017. Prior to that he had lost an eight round decision to Eric Walker in 2015.

“Carlos pulled off a brilliant win in Florida in December, and now is the time for him to build himself into a massive threat in the 168 pouns division,” said promoter Eddie Hearn of the two-time Olympian Gongora. “Christopher is no stranger to upsetting the odds as he proved against Falcao, and he’ll look to do something similar again in Florida.”