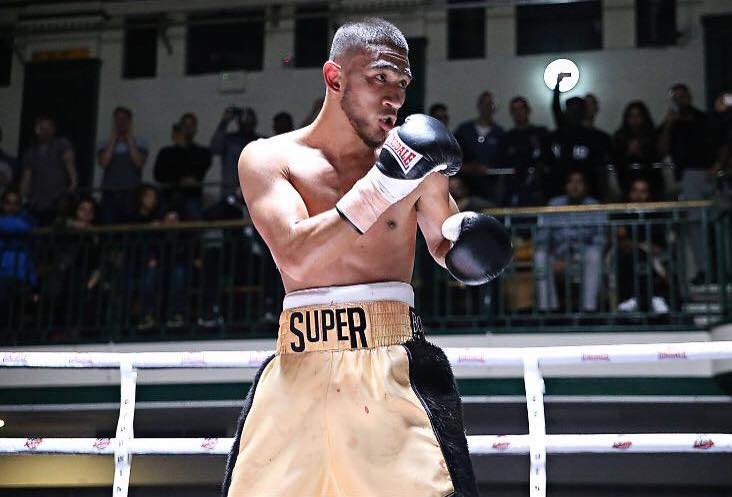 Youssef Khoumari doesn’t have to look much further than his corner for the inspiration he needs in his career.

The 24-year-old junior lightweight from London has been managed by heavyweight contender Dillian Whyte since they linked up through their mutual trainer, Xavier Miller, while the two trained together before Whyte’s bout with Mariusz Wach on the Anthony Joshua-Andy Ruiz II card in 2019.

Like Khoumari, Whyte had to pay his dues, fighting on small, untelevised cards in the United Kingdom. Now, Whyte is one of the biggest names in heavyweight boxing, and regularly headlines cards on international television platforms. Khoumari is hoping to follow his path towards prominence.

“The way Dillian Whyte kicked down the door on the British boxing scene and has become a household name in the UK, he’s definitely an inspiration for me,” said Khoumari (11-0-1, 4 knockouts), who is currently a promotional free agent. “Because like me when he started his career a lot of his fights were untelevised but he still managed to break into the big time.”

Khoumari will take his next step forward as a pro on Saturday, when he faces Kane Baker (14-7, 0 KOs) in a ten round bout on the undercard of Whyte’s rematch with Alexander Povetkin, which takes place at the Europa Point Sports Complex in Gibraltar. The show will be broadcast live on DAZN.

“He’s very aggressive, he throws a lot of punches, he always comes and gives it 150 percent so he’s a game opponent and I’m looking forward to the challenge,” said Khoumari.

The fight is the first for Khoumari outside of the United Kingdom, but he’s used to visiting exotic locations. Khoumari was born to a Moroccan father and a Filipino mother, and frequently visited both of his ancestral homelands as a child. He recalls visiting his mother’s home village, Alibeng in Pangasinan province, and having to cross a river to a place where internet connection is almost unheard of. “What I remember the most is how close the community was, people just walk into each other’s houses, whereas over in London where I grew up that’s almost not heard of, you could never just walk into your neighbor’s house, just for a conversation,” said Khoumari.

Khoumari first became interested in boxing as a child when he grew frustrated with the martial art he was practicing, Choi Kwang-Do. “It was very non-contact, very spiritual. The motto of the martial art was to stop a fight before it begins, I always for some reason wanted to test myself in a real fight,” said Khoumari.

While on a family trip to the Philippines in 2005, Khoumari watched the first fight between Manny Pacquiao and Erik Morales and was mesmerized. In boxing, he saw a combat sport that was pure combat, and was hooked the first time he stepped into a gym and sparred.

Khoumari estimates his amateur career to be 40 bouts, which includes winning the Southern Area title and the Haringey Box Cup.

He turned pro in 2017, fighting primarily on small cards at famed London club venue York Hall. His big step-up opportunity came in November of 2019, when he fought the unbeaten Liam Dillon for the English junior lightweight title. The broadcast commentator thought Khoumari did enough to win the belt, 97-93, but the fight ended in a split draw.

“Me being a fighter it’s always gonna be something I want to go back and avenge and put right,” said Khoumari. “I was very disappointed on the decision on the night, I thought I did enough to get the win.”

Feeling that a fight of that caliber deserved a bigger platform, Khoumari declined a rematch, saying the offer didn’t match what the fight was worth. “But if they were to turn around and put that fight on the right platform, the platform I feel it deserves, I would be ready to go back and put the record straight.”

In the meantime, Khoumari is looking for other ways to make an impression on the domestic scene. His opponent has no knockout wins to his credit, but has only been stopped twice in his seven losses, and has spoiled two unbeaten records so far in his career. A win over Baker would show he’s at least better than that level of fighter, and give him some exposure on the biggest event he’s yet appeared on.

“Apart from the real boxing fans, not a lot of the casuals know who I am. So it’s a chance for me to go out on a big show and just show everyone who I am and what I can do,” said Khoumari.

“I’d love to fight for a title this year, whether it’s putting right the English title or going for a British title. Whatever comes my way and whatever my team feels is right for me at the right time, I’m ready to go.”

Ryan Songalia has written for ESPN, Vice, Rappler and The Guardian. He can be reached at [email protected]