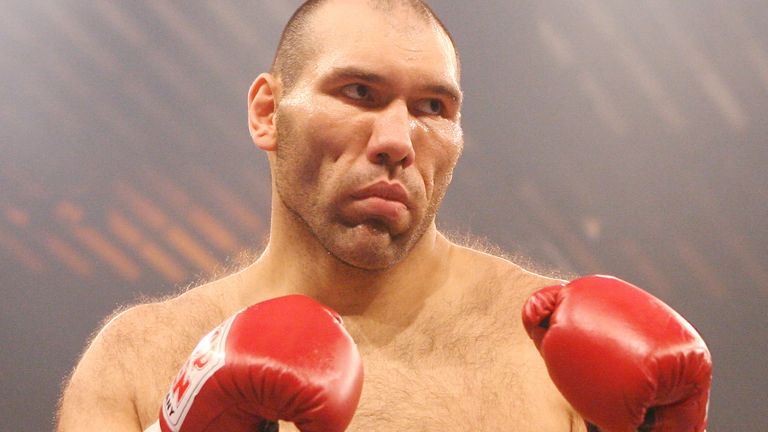 At 7-feet tall and 320-pounds, Nikolay Valuev is the largest person to win a boxing world title. The Russian behemoth twice held the WBA heavyweight title in the mid-to-late 2000s.

Valuev (50-2, 34 knockouts) was born in Saint Petersburg, Russia, on August 21, 1973. He grew up the only child of a working-class family. Both his parents worked at a factory.

“At that point in the Soviet Union most people were equal,” Valuev told The Ring, through Max Alperovich. “I grew up in a blue-collar neighborhood. My parents played a tremendous part in my upbringing—my philosophy of life. I’m really, really grateful to my parents.

“I am still a citizen of Leningrad. When the Soviet Union broke up, it became Saint Petersburg. The city changed, but I’m still old-school mentality.”

Valuev tried several different pursuits in his formative years before arriving at boxing.

“I started in athletics as a discus thrower, I hold very high accolades in that,” he explained. “Then I tried basketball for a couple of years. When the Soviet Union broke up, I was forced to take several difficult jobs, as a waiter, farmer etc.

“I came into boxing when I was 20 years old and boxing saved my life.”

Valuev, who wears a U.S. size 18 shoe, had in the region of 15 amateur fights and turned professional in Germany in October 1993. He fought twice more in Russia, before switching back to amateur boxing and going to the Goodwill Games the following summer, where he lost to compatriot and eventual gold medal winner Alexey Lezin, in the quarterfinals, on a countback decision.

“The Russian Giant” went back to the professional ranks and stayed unbeaten, but his career lacked direction.

“I had about 30 fights all over the world,” said Valuev, who fought in Japan, Czech Republic, South Korea and Belarus. “At one point, I signed a contract with Sauerland and that’s when my career became a little more targeted toward the world titles. I was already ranked by most of the sanctioning bodies, but when I signed the contract that’s when the road to the title started.”

Having finally found a home in Germany with the Sauerland’s, he worked his way into position to face WBA titleholder John Ruiz in December 2005.

It was a close fight, but Valuev was able to edge matters by a hard-fought 12-round majority decision.

“When my hand was raised against Ruiz, it was the feeling of dreams coming true,” he said. “It was my goal in life, I made my dream come true.

“I had a very hard path to winning the title, because I started pretty late and had to endure a lot of injuries.”

The Russian made three successful defenses turning back the challenges of Owen Beck (TKO 3), Monte Barrett (TKO 11) and Jameel McCline (RTD 3), before he was dethroned by the much smaller, but skilled, Ruslan Chagaev by majority decision in April 2007.

Valuev rebounded to outpoint Jean Francois Bergeron, and then Siarhei Liakhovich in a WBA eliminator. Valuev had a rematch with Ruiz for the vacant WBA title. Again, Valuev beat Ruiz, this time by unanimous decision.

Valuev met aging, but legendary former four-time heavyweight titleholder Evander Holyfield in Zurich, Switzerland. Although in his mid-40s, Holyfield was still extremely competitive, and some thought he did enough to win, but Valuev ultimately was awarded the 12-round majority decision.

Valuev and Chagaev were scheduled to meet in a rematch in Helsinki, Finland, in May 2009. However, the fight was cancelled after the weight-in, because Chagaev failed the medical due to Hepatitis. Curiously, weeks later, Chagaev stepped in to face Wladimir Klitschko.

In November 2009, Valuev met David Haye in Hamburg, Germany. Despite outweighing the Brit by some 99-pounds, Valuev dropped a majority-decision.

He debated returning, but for myriad reasons walked away.

“I was supposed to fight Vitali Klitschko a couple of times,” Valuev explained. “I was in camp and both camps fell through. I was offered a very insulting sum of money to fight both times. The fights never happened. I was very disappointed having gone through several camps.

“Finally, all the injuries I endured required many surgeries. I also discovered I had a genetic disease (Gigantism and Acromegaly) and had to have surgery for that as well. And then I finally decided to hang up the gloves.

“Everything is great at the moment; everything has been fixed and is under control.”

Valuev, now 47, is married and has three children. He still lives in St. Petersburg. He is extremely busy, working on several projects, notably as a presenter for the popular Children’s TV show “Good Night, Little Ones!” He also commentates on boxing for Ren TV and represents the BryanskaYa Oblast party in Government and is currently serving his second term.

Larry Donald: The jab was one of his primary weapons. He did it better than anyone else I faced.

Ruslan Chagaev: Ruslan Chagaev for sure. A somewhat slick southpaw. There was a big difference in size, because he was a lot smaller it was difficult to land. 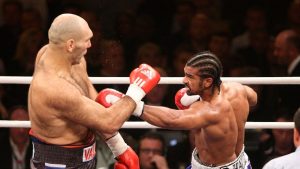 David Haye: He was more of a true cruiserweight than heavyweight and he was a lot faster than anyone else.

Donald: Larry Donald had the best footwork. There was a Ukrainian opponent, Taras Bidenko. I would say Donald.

John Ruiz: I can’t recollect anyone in particular. If I hit somebody flush, they would fold. The only opponents who took the punches well were the ones who rolled with the punches. Most durable, take the intensity, probably Ruiz.

Evander Holyfield: The guys with good I.Q. were the guys I lost to, Chagaev and David Haye. Holyfield had the best ring I.Q, although at the time when I fought him, he was significantly older. 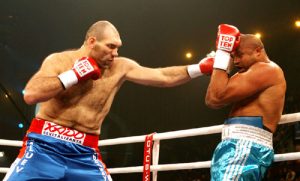 Jameel McCline: He twisted his knee, but he had a lot of raw power and strength.

Holyfield: He was one of my toughest fights. He kept hitting me to the ribs and fractured one of the ribs. I couldn’t breathe properly for a month. It was very unorthodox, it was a punch up close, where he kept throwing hooks on the inside. It was very hard to defend against.

Holyfield: His ability to fight up close and he was able to continuously land those punches to the ribs.

Max Alperovich helped co-ordinate and translate this feature. The Ring appreciated his assistance.