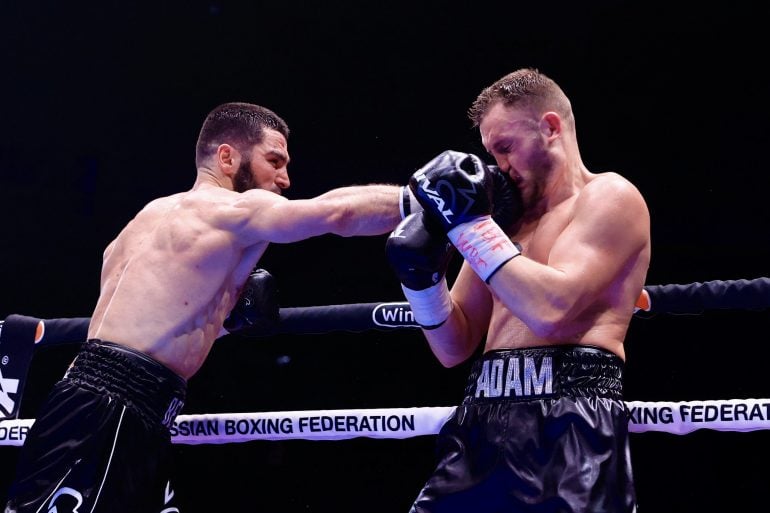 Unified light heavyweight world champion Artur Beterbiev had been out of the ring for 17 tumultuous months — 519 days to be exact – in which he had his title defense postponed five times, faced an opponent change, dealt with a rib injury and even became ill with Covid-19, which forced the final postponement.

But when he finally returned to defend his belts for the fourth time Beterbiev turned in a dominating, workmanlike performance, scored two knockdowns and knocked out Adam Deines in the 10th round on Saturday in the main event of a Top Rank Boxing on ESPN card before a crowd of about 7,000 – 50 percent capacity — at Megasport Arena in Moscow, Russia.

With Hall of Fame former undisputed junior welterweight champion Kostya Tszyu watching from ringside, Beterbiev, who is based in Montreal and was fighting for the first time as a professional in his native country, dominated the fight from start to finish.

It was a fight a long time coming for Beterbiev, who had not boxed since October 2019 in Philadelphia, where he knocked out then-undefeated Oleksandr Gvozdyk in the 10th round to unify the IBF and WBC 175-pound world titles and sent Gvozdyk to the hospital and into retirement. However, the momentum Beterbiev gained from that victory quickly came to a grinding halt.

Two fights dates in March 2020 for a mandatory defense against China’s Meng Fanlong (16-0, 10 KOs) were postponed due to the emerging coronavirus pandemic. Beterbiev was rescheduled to fight in the fall in Russia, which forced Meng out of the bout because of visa issues and he was replaced by Deines.

Two more fight dates were postponed, including in October because Beterbiev suffered a rib injury during training. The bout was rescheduled for January but again Beterbiev had to postpone it because he came down with Covid-19 in December, pushing the fight to Saturday.

“I thought it was very, very good considering the time that he was off,” Top Rank chairman Bob Arum told The Ring about Beterbiev’s performance. “And he was in with a real guy, who tried like hell, but (Beterbiev is) a powerful guy and like with Gvozdyk, he took him out in the last couple of rounds. He keeps himself in unbelievable condition, always.”

Beterbiev (16-0, 16 KOs), 36, a two-time Russian Olympian, kept his perfect knockout record intact and set himself up for a likely three-belt unification fight in his next bout later this year.

Long Island, New York’s Joe Smith Jr. (26-3, 21 KOs), 31, and Maxim Vlasov (45-3, 26 KOs), 34, of Russia, are scheduled to meet for the vacant WBO title, which Canelo Alvarez relinquished, on April 10 in the main event of a Top Rank Boxing on ESPN card at the Osage Casino in Tulsa, Oklahoma. The fight was initially scheduled for Feb. 13 in Las Vegas, but Vlasov tested positive for Covid-19 prior to the weigh-in, forcing a postponement.

After Beterbiev’s victory, Arum reiterated what he has been saying for months – that he intends to match Beterbiev with the winner to unify their belts.

“Joe Smith has a tough fight April 10, but if he wins that fight everybody at Madison Square Garden (in New York) is going crazy because if Smith wins we’ll do him and Beterbiev at the Garden and it will be huge. Huge,” Arum said.

👑 HIGHLIGHTS ⤵️@ABeterbiev's power was on display yet again as he delivered in front of a home crowd in Russia. #BeterbievDeines pic.twitter.com/ammGQJdLc3

And if Vlasov wins, Arum said he will make Beterbiev-Vlasov instead.

“For that fight we’d probably look for a site fee in the Middle East or something like that. Maybe we would do the fight in Quebec City or Montreal,” Arum said, noting Beterbiev’s popularity in his adopted country of Canada.

Beterbiev took command of the fight against (19-2-1, 10 KOs), a 30-year-old Russian fighting out of Germany, from the outset. Beterbiev was clearly winning the opening round when he put an exclamation point on it when he landed a short right hand high on Deines’ head for a knockdown. Deines beat the count and the bell rang to end the round, so Beterbiev was not able to throw another punch.

Beterbiev showed a diverse arsenal, landing plenty of stiff jabs to the head and body, right hands to the head and combinations against Deines, whose offensive output was minimal and not very effective when he did land.

Beterbiev steadily picked up the pace as the fight wore on and Deines, a southpaw, seemed to be playing with fire by circling to Beterbiev’s right and into his money maker – the right hand.

Whatever spring his step that Deines had Beterbiev seemed to take it away in a big fourth round in which he landed jabs to the body, split his guard with a heavy right uppercut, rocked him with a left hook and continued to force him into the ropes. Deines found himself backing into the ropes so often that he had red marks on his back by the end of the fourth round.

Deines landed some decent shots and reddened Beterbiev’s forehead but he rarely let his hands go with combinations, probably out of concern of what heavy blows Beterbiev would fire back at him.

Beterbiev landed more heavy shots in the sixth round and even was able to move Deines when he landed grazing shots or punches that hit his gloves. He swiveled Deines’ head with a left hook in the eighth round and it seemed like it would only be a matter of time until he finished him.

That time finally came in the 10th round – only the third time Beterbiev had been that deep into a fight – when he nailed Deines with a left hook on the chin to drop him to all fours.

Deines, who came into the fight having won two bouts in a row since a decision loss to Meng in their June 2019 IBF title eliminator, quickly got to one knee and rose at the count of eight, but he looked in rough shape and his corner threw in the towel, causing referee Yury Koptsev to waved off the fight at 1 minute, 34 seconds.

Beterbiev now will look forward to further unifying the division with the Smith-Vlasov victor. Before he knocked out Deines, Beterbiev said he was already looking forward to facing the winner in another unification fight next.

“Of course, I would be interested to have a unification fight. I would be happy to have it,” Beterbiev said a few days before Saturday’s fight.

Now, he is probably going to get it.