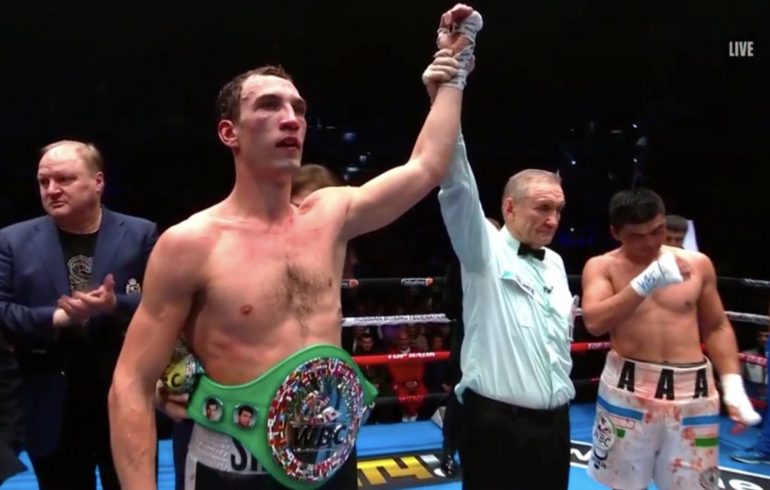 Super middleweight up-and-comer Pavel Silyagin took it to Azizbek Abdugofurov and won a lopsided unanimous decision and a regional belt in an entertaining scrap on Saturday in the co-feature of the Top Rank Boxing on ESPN card headlined by unified light heavyweight world champion Artur Beterbiev’s defense against Adam Deines at Megasport Arena in Moscow.

Silyagin showed a lot of movement, deftly switched often between right-handed and southpaw stances and winged shots from all angles against the slower more stationary Abdugofurov, who wanted to make it more of a brawl.

That 3-piece combo meal 😳#BeterbievDeines co-main is heating up on ESPN & ESPN+. pic.twitter.com/IRMz3JaZkG

But Silyagin was able to control the pace of the fight and landed many clean shots down the middle. By the sixth round, Silyagin was pressing forward more and gave Abdugofurov, who owns a 2018 unanimous decision win over Dmitrii Chudinov, a bloody nose in an increasingly dominant performance.

Abdugofurov, whose face was marked up and swelling, rallied briefly in the eighth round when he caught Silyagin with a sweeping right hand that seemed to buzz him. But Silyagin quickly collected himself and held off a desperate Abdugofurov (13-1, 5 KOs), 29, an Uzbekistan native fighting out of Malaysia, in the 12th round.

Welterweight contender Alexander Besputin easily stopped late replacement opponent Viktor Plotnikov, who retired on his stool following the second round of the scheduled 10-round fight that was part of the ESPN+ stream of preliminary bouts

Besputin (14-0, 10 KOs), 29, of Russia, whose promotional contract with Top Rank ran out a few months ago and was not renewed, landed many left hands but had not badly punished Plotnikov and had not knocked him down, but Plotnikov (33-11, 15 KOs), 43, of Ukraine, wanted no more after the second round. He lost his eighth fight in a row and has not won since December 2015.

Besputin was fighting for the first time since Nov. 30, 2019 in Monte Carlo, where he won a unanimous decision against Radzhab Butaev to claim the WBA’s vacant secondary welterweight title. However, Besputin tested positive for the banned substance Ligandrol in his A and B samples. He was subsequently stripped of the belt and the decision was overturned to a no contest. He was also suspended for six months by the WBA.

Besputin was originally supposed to box in the co-feature against Maximiliano Ricardo Veron (12-3-1, 4 KOs), 32, of Argentina, but when Veron dropped out and the lesser regarded Plotnikov took the fight on short notice the bout was repositioned further down the card.

From the opening moments it seemed unlikely the fight would go too deep as Agrba, a Russian-based southpaw from the Republic of Georgia, stormed at him like a whirlwind and put heavy leather on him throughout the first round.

Agrba, a 2019 European Games silver medalist as an amateur, teed off on Rojas almost at will, but Rojas took the shots and came out for the second round, where things only got worse for him. Agrba continued to hammer him with shots from both hands.

When he forced him to a corner and continued to nail hi unabated the referee finally stepped in and stopped the fight at 2 minutes, 30 seconds.

Rojas’ record may have looked solid but upon further examination it is clear that it was built up against very weak opposition as nine of his victories had come against opponents who had not recorded even single win.

Also on the undercard

— Heavyweight Vladimir Ivanov (4-0, 3 KOs), 29, of Russia, overwhelmed Alexander Stepanov (2-4, 1 KO), 34, of Russia, in a first-round knockout win in their scheduled eight-round bout. Ivanov displayed a powerful and steady jab and also did damage with a body shots and a series of clean right-left combinations.

He had Stepanov backed into a corner and was teeing off. He landed a hard right hand to the body that doubled Stepanov over, forcing the referee to intervene and wave off the fight. Stepanov has been stopped in three of his four losses, including twice in a row.

Late in the first round Mironchikov dug a left hook to Akhundzada’s body and he went down. He barely beat the count and the round ended. He quit on his stool after the round.

The fight was an obvious mismatch from the start as Mironchikov weighed 173 pounds and the obviously much smaller Akhundzada was only 160.

— Middleweight Rakhman Akhmetkhanov (1-0, 1 KO), 24, an eight-time Russian national freestyle wrestling champion making professional boxing debut, took out Artem Karpets (21-16, 6 KOs), 37, a Ukraine native fighting out of Poland, with a left hand to the body late at 2 minutes, 7 seconds of the first round of their scheduled six-round bout. He barely beat the count but was in no position to continue. Karpets, a one-time fringe contender, lost his 16th fight in a row.