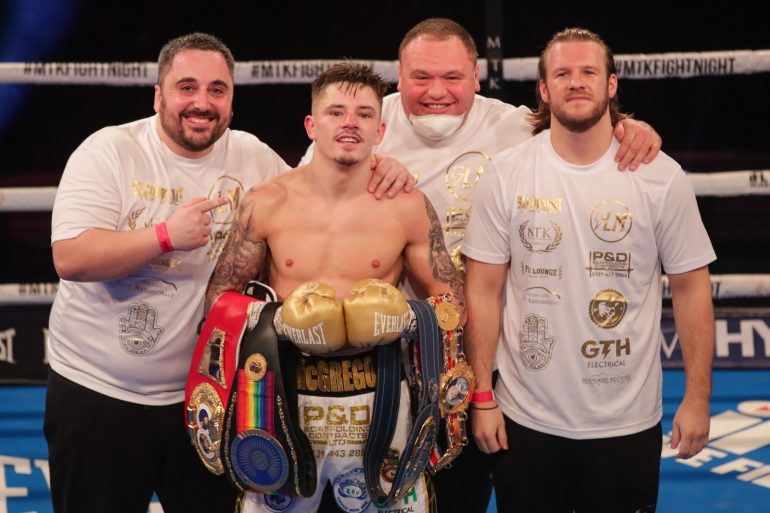 Lee McGregor made a statement to the bantamweight division by stopping defending European titleholder Karim Guerfi in the first round at Bolton Whites Hotel, Bolton, England.

McGregor (10-0, 8 knockouts) dropped the Frenchman in the opening minute with a debilitating body shot. Guerfi (29-5, 9 KOs) was in agony but found a way to his feet and held off the onslaught and was able to get a few jabs off.

However, the 24-year-old Scottish dropped Guerfi for the second time with a well-placed left hook to the body. McGregor looked for the knockout and was able to land a left hook to score the highly impressive stoppage at 2:43 of the opening round.

“I said in the lead up to the fight people are going to see a completely different Lee McGregor,” said McGregor, who added the European title to his British and Commonwealth titles. “I think I showed that tonight. My physical and mental strength, I’ve improved so much, I’m living the life, I’m a proper professional now.

“We had three cancelled dates; it was mentally challenging but it paid off.”

Thoughts quickly turned to what is next for the fast-rising fighter.

“It’s highly likely he could be on the Josh Taylor [vs. Jose Ramirez] undercard [on May 22] in America. If Josh is successful and fights Jack Catterall later in the year, there could be a big fight on there for Lee.

Hughes, who upset Jono Carroll and Viktor Kotochigov last year, muscled his way onto the inside and made the taller Hyland fight his fight. It was an exciting fight that saw both men have their moments.

In the eighth round Hughes hurt the Irishman who appeared to go down but apparently hadn’t and Hughes followed up and dropped Hyland. Referee Mark Lyson wasn’t quick enough to stop Hughes having a free shot at the visibly hurt fighter. Though waved the fight off after Hyland found his way to his feet at 1:20 of the round.

“It’s taken me 11-years to get to this but look what happened, I didn’t give up.” said a clearly happy Hughes, who won the British title at the third time of asking.

Junior featherweight Shabaz Masoud (8-0, 2 KOs) dropped Louis Norman (14-9-1, 2 KOs) in the third round and twice more in the fourth round prompting his corner to throw in the towel at 1:12.

Nathan Bendon (4-3-1, 1 KO) handed Eryk Apresyan (7-1, 5 KOs) his first defeat by outpointing him 57-56 on referee Mark Lyson’s scorecard. Apresyan was docked a point for pushing Bendon to the floor in the final round, which ultimately cost him a draw.